London, Oct. 4, 2020 (AltAfrica)-The decision by Ifeoma Dieke to play football for Scotland when faced with alternatives may seem fairly questionable to some.

After all, it isn’t about money or glamour. It certainly isn’t about trophies or medals. For Ifeoma Dieke, it was a conclusion sourced straight from the soul.

“It’s all about what you want to do with your heart, I followed mine and it led me to Scotland. I’ve never regretted it,” she says with a smile.

In hindsight, it was the right call. Dieke will go down as an icon of women’s football in this country. She was capped 123 times, was part of the squad that qualified for their first tournament at the 2017 European Championships, and became the first black women to captain the nation.

However, it all could have been so different for the American-born defender with Nigerian parents, who was brought up in the Lanarkshire town of Cumbernauld and also – for a time – in Norwich.

With that backdrop, the strong Caledonian connection is not obvious, especially given she had the chance to be part of a star-studded United States set up. But in 2004, the irresistible lure of the land she calls home was overpowering.

“I was going over to California for two weeks to go train with the US national team,” Dieke tells the ‘Chris Iwelumo Meets’ podcast. “They explained to me the bonus system, the win system, all this stuff. But that’s not the reason why I’m going to go play for a country.

“It came to me that I might have been born in America, but I don’t feel American. I grew up in Scotland, I just feel that everything about me is Scottish.”https://emp.bbc.co.uk/emp/SMPj/2.35.13/iframe.html#8Proverbs – Ifeoma Dieke

‘Mum said there was no job for me in football’

Dieke is a real-life Gregory’s Girl. In 1981 – the year she was born – a Scottish movie of that name was filmed in Cumbernauld, depicting a school girl who starred in her school team.

It wasn’t until she moved back there from Norwich during her primary school years that her own footballing love affair sparked, a young Ifeoma and two friends eventually plucking up the courage to ask to play with the boys in the St Mary’s playground, dreaming of wearing a Brazil shirt “while playing cuppy”.

A few years later, the opportunity to play and study in Miami appeared. Academia was the focal point from her parents, Dieke explains. But it wasn’t the first thing on her mind.

“My dad has a PhD. He’s very well educated, just like my mum,” she says.

“[The coach] said football and Miami and that’s all I heard. I was excited. I went home and told my mum and dad. First thing they asked was ‘what’s the school like?’ Typical. I didn’t know anything about the school, I just heard Miami, football, America, test yourself among the best.”

When on a scholarship at Florida International University, Dieke flourished and a professional contract offer from Atlanta Beat soon arrived. It was the chance to prove her mum wrong for which she had been waiting.

“I remember that day so clearly. My mum always said to me that this was just a hobby – there’s no job for me in football. So I remember when I phoned my mum, I said: ‘Remember all those times growing up you said I couldn’t make a living out of it?’ We just laughed.”

Hitting a century & that wow feeling

The call to play for Scotland would arrive in 2004 as Dieke adjusted to life not as a player, but during a spell as a coach, after Atlanta’s league folded at the end of her first season.

Her debut came in January of that year against Greece, with the caps following over the next 13 years. 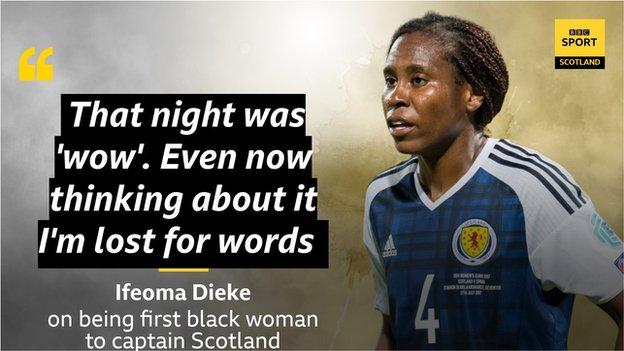 For the 39-year-old, there are so many highlights – representing Great Britain at the London Olympics in 2012, qualifying for the Euros, earning her 100th cap – but one in particular still resonates.

“That night it was, just, wow. Even now just thinking about it I’m just lost for words because I never thought about my skin colour or things like that.

“Captaining any team is fine, but Scotland, your country and leading out all these players and having that privilege. Then you add in the part where people who are out there who are black can see Ife captain Scotland, Ife playing for Scotland over 100 times.

“Maybe then their younger selves can be like, I can do it, and no-one can tell them anything differently.”

‘Speak up, and speak up sooner’

Across the world, sport has united behind the Black Lives Matter movement to try to combat racism, with footballers in England and Scotland taking a knee before matches to support the cause.

It is an issue of which Dieke has first-hand experience. She speaks of comments aimed at her by both spectators and opponents, while underlining the need to speak up if you feel targeted.

“We were in Russia and in Bulgaria,” says the Scot, who lives in Florida. “Back then there wasn’t as many fans and you would hear the screams and shouts and the words they’d say. You try to block it out.

“My team-mates were so supportive. I remember one incident – Anna [Signeul, former Scotland manager] did try to tell the delegate to report it because you think ‘all I’m doing is playing football and all you want to do because of the colour of my skin is abuse me and shout at me’.

“I don’t think anything ever happened with it.”

She added: “You feel like you’re powerless. Maybe when I was younger, it was like more shame and you wouldn’t say anything because you feel bad. You think ‘what could they do?’

“If I was talking to the younger me, it would be to speak up – and speak up sooner. Never let anyone damper my hunger, I always had the drive to do it. But, if someone called me something, rather than sweeping it under the carpet, speak up a bit more.”

The ‘Chris Iwelumo Meets’ podcast will be available later this month on BBC Sounds.

Another eight migrants dead, 12 missing off ...