London, October 24, 2018 (AltAfrica)-The Federal Government of Nigeria says it is engaging critical stakeholders such as traditional and religious leaders to advise their members on child spacing.

The Minister of Finance, Mrs Zainab Ahmed, said this on Tuesday at the Nigeria Economic Summit meeting in Abuja.

According to her, the increase in the nation’s population was found to be one of the ‘great challenges’ in the Federal Government’s Economic Recovery and Growth Plan (ERGP), hence the need to curb the “exponential population growth”.

She said, “We have been engaging traditional rulers and other leaders. Specifically, we have found out that to be able to address one of the great challenges that we identified in the ERGP, which is the growth in our population, we need to engage these institutions”.

In a tweet on Wednesday, the minister also cleared the air on reports that the government had plans to implement a policy that limits the number of children a mother can have, saying, “We never said we are placing a cap on childbirth.”

“What is child spacing? This is a healthy practice of waiting between pregnancies”. 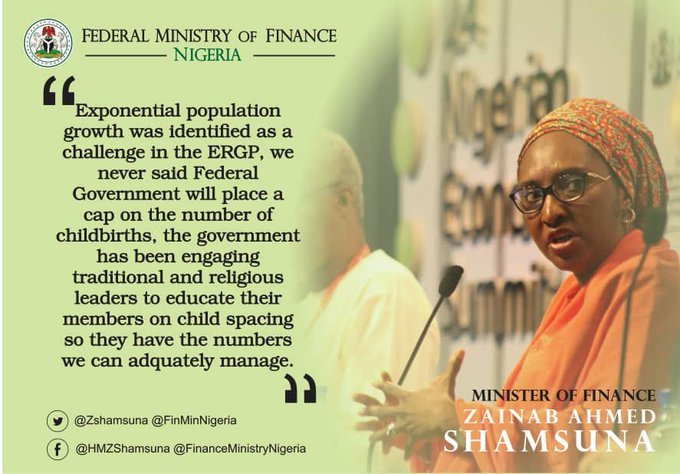 The federal government has been engaging critical stakeholders like traditional and religious leaders to advise their members on child spacing.

We never said we are placing a cap on childbirth.

What is child spacing?

This is a healthy practice of waiting between pregnancies.

Ahmed also spoke about the government’s efforts in creating more jobs for youths.

She listed the attainment of 7,000 megawatts of electricity as a major milestone in empowering youths with small businesses.

The importance of statistics to Africa’s development ...