Hamburg, September 30, 2018 (AltAfrica)-Thousands of demonstrators have taken part in a parade against racism in the northern German city of Hamburg on Saturday

The “United against Racism” parade, a collaboration between more than 450 organisations and businesses, called for the protection of asylum-seekers, safe migration routes, an end to deportations and more to be done to stop right-wing extremism.

Among the organisations involved were the Sea-Watch migrant rescue charity and Laut Gegen Nazis (Loud against Nazis), which campaigns against right-wing extremism. Demonstrators marched alongside 40 brightly decorated trucks before the parade concluded with a concert around 6 p.m. 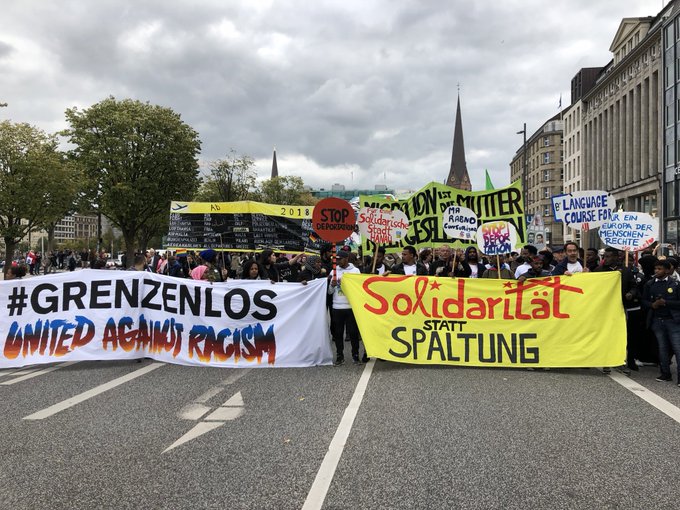 Participants carried signs reading “solidarity instead of division” and “hate is no opinion.” Other signs said “Nazis secretly eat Turkish kebabs” and “filter coffee, not people.”

“It is an uprising of solidarity and a day of resistance,” said Newroz Duman, spokeswoman of the network “We’ll Come United” at the end of her speech. “The problem is not called migration, the problem is called is called racism.”

The march follows a series of anti-immigrant protests and counterprotests in the eastern German town of Chemnitz after a German man was stabbed to death in late August.

Two men of Iraqi descent were arrested over the stabbing. One has since been released and police are looking for a third man