The 42-year-old’s victory in Atlanta was his 80th PGA Tour title – only fellow American Sam Snead has more – but his first since August 2013.

Less than a year ago he was 1,199 in the world after spinal fusion surgery – the latest of multiple operations.

Congratulations @TigerWoods #GOAT on your

for all the support and messages. jR 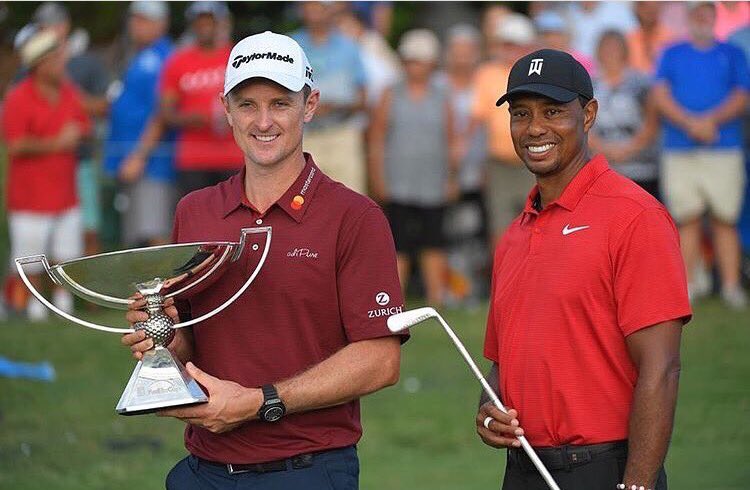 “I was having a hard time not crying on that last hole,” Woods said.

“I just can’t believe I’ve pulled this off.”

Thousands of fans spilled on to the 18th fairway to follow Woods to the green chanting “U-S-A” and “Tiger, Tiger” after his approach found a bunker on the edge of the green.

Woods holed out for par to complete a final round of 71 for an 11-under total before holding his arms aloft in celebration of a brilliant win just days before the Ryder Cup gets under way in Paris.

‘I loved every bit of it’

Woods, who was two clear of compatriot Billy Horschel, said: “I had to suck it up and hit some shots. Once I got the ball on the green, it was done. I could handle it from there.”

The 14-time major champion’s last tournament victory was in August 2013 at the WGC-Bridgestone Invitational, since when he has had surgery on his back four times

“It was just a grind out there,” Woods added. “I loved every bit of it, the fight, the grind and the tough conditions.

“At the beginning of the year, it was a tall order but as the year progressed and I proved I could play, I knew I could do it again.”

He came into the final day of the tournament – the last of four FedEx Cup play-off events – with a three-shot lead over Rose and Northern Ireland’s Rory McIlroy, who faded from contention with a 74 to finish on five under in a tie for seventh.

Woods birdied his first hole – one of two birdies and three bogeys – with his place at the top of the leaderboard in little danger during the final round.

“It’s been tough. I’ve had a not-so-easy last couple of years,” he said. “I’ve worked my way back. I couldn’t have done it without the help of all the people around me.

“Some of the other players knew what I was struggling with. It was really special to see them at the green on 18. It’s just hard to believe I won the Tour Championship.”

The win for Woods, who is part of the United States team for next week’s Ryder Cup in Paris, means he is now two short of Snead’s all-time PGA Tour title record of 82.

It comes less than a year since Woods said he might never return to competitive golf following multiple back operations.

In April 2017 he had his third surgery in 19 months to try and cure pain in his back and leg.

He returned to competitive golf in November 2017 and admitted he was “winging it” as he waited to see if his back would hold up.

“I’ve been in bed for about two years and haven’t been able to do much,” Woods said before the Hero World Challenge, where he would finish ninth in the 18-man field.

Back on the PGA Tour in 2018, Woods missed the cut in his second event but crucially felt fit enough to add tournaments to his schedule and the results soon followed, most notably when he led the Open Championship at Carnoustie with eight holes to play and then finished runner-up in the US PGA Championship.

“It was just a matter of time and I’m so happy for him.”

Tanzania Starts Burials for Those Killed in ...