The EU plans to invest more in Africa and wants to intensify trade relations. Since the refugee crisis, Europe has been courting African governments and banking on increased cooperation.

London, September 16, 2018 (AltAfrica)-For many years now, the EU’s Africa policy has been a graveyard of big words, good intentions and unfulfilled promises. However, since the refugee crisis interest in a new strategy for cooperation with the continent has increased sharply.

The Europeans have stood by and watched as China established itself in Africa, investing billions in the continent. EU states fear they will find themselves relegated to the second league. This is why, in his speech this week on the state of the EU, Commission President Jean-Claude Juncker once again announced “a new pact with Africa.”

In the next budget period the EU plans to increase funding to Africa to €40 billion ($46.5 billion). The hope is that this money will then be multiplied by private investors. As an incentive, the EU wants to provide risk guarantees to encourage the private sector to make the commitment and invest in African countries.

At the same time, Brussels is increasingly seeking cooperation with the development banks of the EU member states and with the European Investment Bank (EIB), which are integrated into the program. The EIB, for example, is already providing €6 billion to 2020 to tackle the causes of migration and flight, and it’s hoped this will trigger a further investment of around €35 billion.

The emphasis here is on education and jobs. Over the next five years the Alliance for Africa wants to create 10 million jobs; 750,000 people are to receive vocational training, with a further 100,000 students benefiting from the Erasmus exchange program. The European Commission also plans big investments in transport, road infrastructure and energy

‘Next step is to be true economic partners’

When asked whether this wasn’t just another reiteration of the EU’s good intentions, Neven Mimica, the EU commissioner for international cooperation and development, explained that the plans currently being put forward represent a new approach.

“Until now there wasn’t a coherent economic strategy,” he said. Now, though, the EU wants to define — in partnership and cooperation with African countries —the best opportunities for development in each nation, and how the private sector can be incorporated into the relevant projects.

The European Commission gave an example of this tailor-made support. With the support of the Dutch development bank FMO, microcredits are being given to internally displaced people, returnees and small businesses in sub-Saharan countries. This is intended to generate several hundred thousand jobs, from an initial capital of €75 million.

“We are already strong political partners,” said Federica Mogherini, the EU’s chief diplomat. “The next step is to be true economic partners and deepen our trade and investment relationship.” 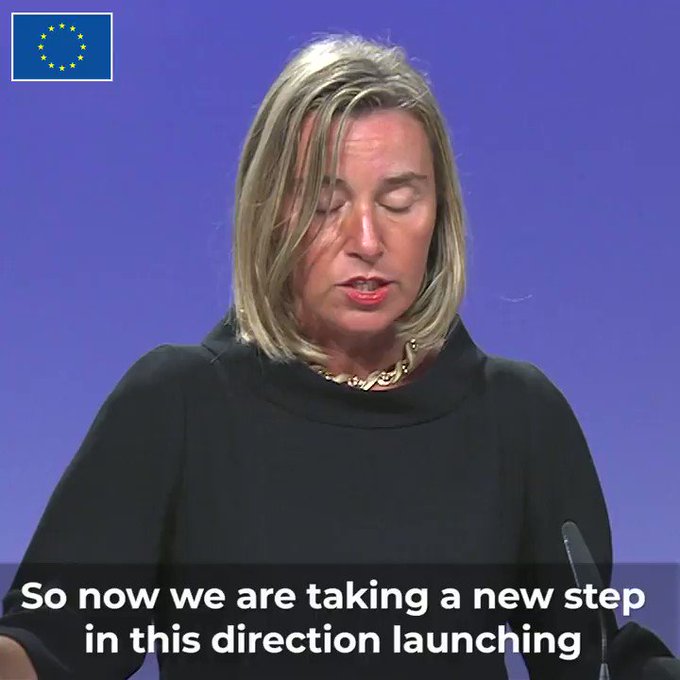 The EU is still Africa’s biggest trading partner, accounting for 36 percent of all exports, ahead of China and the US. The aim of the European Commission is to intensify this cooperation and put it on a new contractual basis. There are already partnership agreements with 52 African countries, meaning that many goods — everything except weapons — are generally exempt from customs duty.

As a next step, Europe is aiming for a comprehensive free trade agreement between the EU and Africa. But this would also mean African partners would have to dismantle the majority of their customs barriers. African countries should, however, be allowed to retain some of their import duties in order to protect their domestic agricultural industry.

Critics have pointed out that the principle of fair exchange has already met with trouble, because European products are forcing their way onto African markets at prices that are far too low. And if farmers in Europe are hurt by low prices, they at least get compensation in the form of direct payments from the EU. For small-scale farmers in Africa, their entire livelihood may be jeopardized.

NGOs have warned there cannot be the same rules for trade between rich and poor countries. As one of the most important countries in West Africa, Nigeria has until now refused to sign a partnership agreement with the EU. The balance of interests in this field is more complicated in individual cases than one might suspect, given the EU’s grand announcements.

European politicians have reacted with alarm to demographic projections that see Africa’s population surpassing 2 billion by 2050. Leaders like France’s Emmanuel Macron and Germany’s Angela Merkel have been tirelessly visiting African nations to promote economic cooperation and development, spurred on by the prospect of increasing numbers of African migrants potentially seeking a better future in Europe. Mogherini has said “the young people in Africa are not a burden, they are an opportunity” for the continent, though she hasn’t denied that rapid population growth will be a challenge. What has gone unsaid, at least officially, is that a doubling of Africa’s population in the next few decades will rapidly absorb any development progress, leaving even the most colossal international investment plan scrambling to catch up.

And comments like those by Tanzanian President John Magufuli, who recently called on the women of his country to abandon contraception and produce more babies, may well have provoked even more concern among European politicians and given rise to fresh doubts about the responsibility of some African rulers.

Readmission agreements for African migrants, which play a role in all of the EU’s negotiations, are also progressing slowly. The money that migrants send home to their families from Europe is currently more important than investment pledges from the north; pledges which will only pay out in the future.

Official statements from the EU have also carefully avoided topics like corruption insecurity, so as not to create political resistance. The hope is that private investors will not be put off, and instead will see the promise of Africa’s economic possibilities and allow guarantees from the EU and development banks to calm their nerves.