–Persecuted under Pinochet, educated in East Germany, and the first female president of Chile — Bachelet has led a remarkable path to the UN. Her mandate as the body’s Human Rights Commissioner begins Saturday.

London, September, 2, 2018 (AltAfrica)-Michelle Bachelet had just turned 20 when the secret police of Chile’s right-wing dictator Augusto Pinochet arrested her together with her mother in January, 1975.

Her father, Alberto Bachelet, an air force officer, had remained loyal to the former president, Salvador Allende, during the 1973 military coup and refused to take part in overthrowing the elected socialist leader. That decision led to him being arrested and tortured; the aftereffect of the torture cost him his life.

The young Bachelet and her mother, archaeologist Angela Jeria, were also taken to the notorious Villa Grimaldi torture center, where they were tortured during interrogations. “They put a hood over my head, threatened me and hit me. But I was spared the grill,” Bachelet said as she later recalled her experiences. The “grill” was a frame for administering electric shocks.

A desire to serve the people

Those traumatic experiences stayed with Bachelet throughout her life, shaping her and likely also influencing her later political career. The 66-year-old says she had always been driven by a desire to do something for the general population. Politics, she believes is like medicine on a larger scale. 1973: Supporters of Chile’s socialist government are detained in the Santiago de Chile stadium; several are tortured and later executed.

Bachelet’s new post as the head of the UN High Commissioner for Human Rights (UNHCR) has enabled her with what is probably the greatest yardstick to tackle oppression and arbitrariness in the world.

The UN General Assembly unanimously accepted the proposal of UN Secretary-General Antonio Guterres — 193 states had to vote. When the president of the assembly, Miroslav Lajcak, officially announced the result of the ballot, applause filled the hall.

Bachelet thanked the delegates in a video on Twitter saying that she was “deeply moved and honored to be entrusted with this important task.” 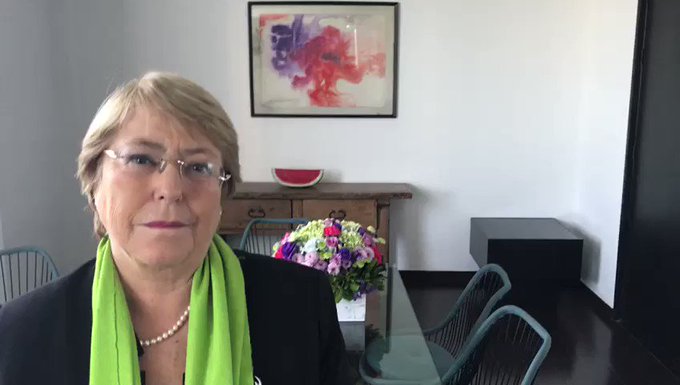 Deeply humbled and honored to announce my acceptance as the @UN’s new High Commissioner for Human Rights. I thank Secretary General @antonioguterres and the General Assembly for entrusting me this important task.

Bachelet has had one of the more unusual political careers in Latin America. When she and her mother were finally released by the military junta’s henchmen, they fled via Australia to the German Democratic Republic (GDR).

The bloody coup underway in Chile at the time triggered a wave of solidarity among socialist countries. The GDR was among the states that demonstrated the most commitment to refugees from Chile, organizing their expatriation and taking in several thousand of those who fled. The GDR head of state Erich Honecker, whose son-in-law was from Chile, declared the mission to be a matter for the top office.

Bachelet, who had already joined the socialist movement in her youth, lived in exile in the GDR for five years. There, she studied medicine at East Berlin’s Humboldt University and gave birth to the first of her three children. She later said about her time in Germany that it helped her to recognize the value of work and efficiency, and that she learned to be open to a foreign society.

Minister of Health and Defense

Before the end of the dictatorship, the trained surgeon and pediatrician returned to her native city of Santiago in 1979 and joined the Socialist Party of Chile. For political reasons, she was not allowed to continue to practice her profession as a pediatrician. After the end of the dictatorship in Chile in 1990, Bachelet began a career in the Ministry of Health. From then on, her political rise was stratospheric: in 2000 she was named the country’s health minister, in 2002 defense minister, and in 2006 Chile’s first female president.

Bachelet enforced democratic reforms on the military. However, she still refuses to use the term reconciliation. She prefers the Spanish word “reencuentro,” which translates as “re-encounter” or the attempt to approach one another cautiously.

As a leader, she famously said “I unite all of Chile’s deadly sins within me.” She is a socialist, has three children to two different fathers and is an avowing atheist. Nevertheless, her first presidency is considered a turning point in Chilean history. During this time that she implemented improvements to the state health system, initiated welfare programs for poor families, legalized divorce and started a campaign to fight illiteracy.

Chile’s economy also flourished under her leadership. The president describes the Human Rights Museum in Santiago as her very personal project: A place of documentation and remembrance of the crimes of the Pinochet dictatorship. Bachelet left the presidency in 2010 amidst high approval ratings — the Chilean constitution does not allow a second consecutive term in office.

Four years later, in 2014, Bachelet won another election. But her second term as president was overshadowed by a corruption scandal in her family of which her son was the focus.

While he gave up his role as a political adviser, Bachelet did not publicly take a stand against him. At the time, almost half of Chileans said that they no longer believed in their president.

A few weeks before the end of her presidency, Bachelet apologized on behalf of the Chilean state for the injustices suffered by the Mapuche people and presented a program aimed at protecting the rights of Chile’s indigenous people.

Bachelet is no stranger to the United Nations. Between her two terms of office, she was head of UN Women, the new UN organization striving for female equality.

She succeeds Jordanian Prince Zeid Ra’ad al-Hussein in her new role as chief of UNHCR.

Zeid, whose appointment was derided as being tokenistic, became an outspoken figure who denounced the deterioration of the human rights in many countries, regardless of possible political sensitivities. After losing the support of influential countries such as the US, Russia, and China, the prince finally announced that he would not seek a second term in office.

Zeid had made a name for himself as a fierce critic of US President Donald Trump, among others. He described the Hungarian head of government Viktor Orban as “racist.” Zeid was also appalled by the harassment of foreigners in the eastern German city of Chemnitz.

A new shine for the UNHCR

Given recent criticism, human rights groups feared that UN Secretary-General Guterres would choose a less vocal successor. The appointment of Michelle Bachelet may have quelled that fear. It is the first time in over a decade that a former head of state is once again at the helm of UNHCR.

Previously Ireland’s former president, Mary Robinson, held the post from 1997 to 2003. Bachelet’s political contacts from her terms as president will likely prove useful once again in her new role. Guterres expressed his confidence in Chile’s former president, saying she was “perfectly suited” for the post. Nevertheless, he made clear that it will not be an easy task for Bachelet to take on. In June, the US withdrew from the UNHCR in protest against a motion the international body passed against Israel. Funds from Washington for the UN organization were cut drastically.

Human rights remain under threat in many places around the world. “Hate and inequality are on the rise,” warned Guterres. The pressures on civil society are mounting; that strain has put it on the defensive. Fundamental tenets of democracy, such as freedom of the press, are also endangered. Human rights violations are increasing worldwide. Michelle Bachelet certainly has her work cut out for her.