UK and Kenya step up cooperation to track British paedophilia

Nairobi, August 30, 2018 (AltAfrica)-British Prime Minister, Theresa May has announced a tie-up with the Kenyan authorities to help track down British paedophiles as she concludes her tour of Africa.

The UK is to build a cyber centre in Nairobi to help Kenyan police stop child abuse images being shared online.

It will also assist efforts to identify potential victims and access data from tech firms to catch offenders.

Mrs May is the first British prime minister since Margaret Thatcher in 1988 to visit the country.

She is meeting president Uhuru Kenyatta and seeing British soldiers who are training troops from Kenya and other African countries fighting Islamist militant group al-Shabab in Somalia.

At a joint press conference, the prime minister announced a wide-ranging new security pact between the two countries, including funding for enhanced airport security in the former British colony.

The UK also offered support to Kenyan police in dealing with violence against girls and women, plus legal expertise on pursuing complex terror and organised crime cases.

The cyber centre project is linked to Kenya’s existing anti-human trafficking and child protection unit, which was set up in 2016 with input from the UK’s National Crime Agency.

This unit has helped protect around 499 children since March 2016 and helped secure convictions of British paedophiles who have sexually abused children in Kenya.

“Online child exploitation is an abhorrent crime and we are determined to ensure there is no place to hide for predators who use the internet to share images of abuse across borders, too often with impunity,” Mrs May said ahead of her arrival in the Kenyan capital.

The prime minister is on the final leg of a three-country tour, which has seen her visit South Africa and Nigeria in an effort to maximise trade opportunities after the UK leaves the EU next year. 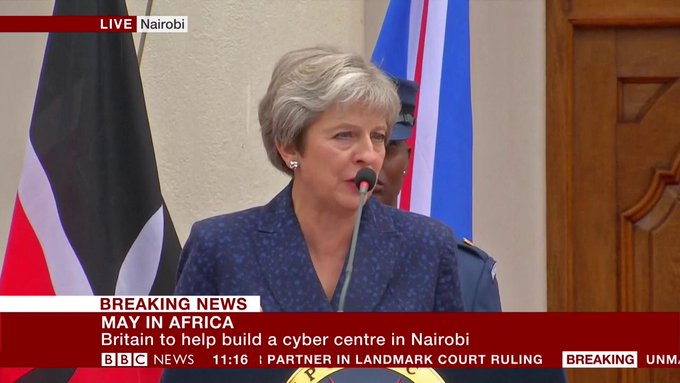 “We see greater opportunities for British businesses in Kenya in the future,” Theresa May’s says while on a trip to the countryhttps://bbc.in/2PgBeKc

She also said she wanted the UK to overtake the US to become the G7’s biggest investor in Africa by 2022 and struck Britain’s first post-Brexit trade pact with Mozambique and the Southern African Customs Union.

Mrs May’s trip will finish on Thursday with a state dinner hosted by Mr Kenyatta.

He has told the BBC’s Hardtalk programme that all public servants, including himself, will be audited to show the origin of their wealth.