Life and Times of Kofi Anna the famous Nigerian Inlaw

Honour to him it is due. Kofi Anna greets President Buhari of Nigeria (inlaw) at the inauguration of Akufo-Addo as Ghana president

Annan passed away peacefully on Saturday 18th in Switzerland after a short illness. His wife, Nane Annan and their children Kojo, Nina and Ama were by his side during his last days.

He was reported to have fallen ill on his way back from South Africa (the Mandela centenary).

Bye bye Kofi Anna seem to be saying to the world

He was hospitalized in Geneva and later airlifted to the capital, Bern.

The 80-year old Ghanaian diplomat served as the seventh Secretary-General of the United Nations from January 1997 to December 2006.

Annan and the UN were the co-recipients of the 2001 Nobel Peace Prize.

He was awarded the Peace Prize for having revitalised the UN and for having given priority to human rights.

The Nobel Committee also recognised his commitment to the struggle of containing the spread of HIV in Africa and his declared opposition to international terrorism.

He is the founder and Chairman of the Kofi Annan Foundation, as well as chairman of The Elders, an international organisation founded by Nelson Mandela 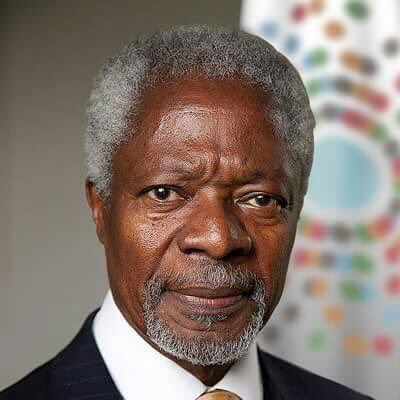 Today we mourn the loss of a great man, a leader, and a visionary: former @UN Secretary General @KofiAnnan.

A life well lived. A life worth celebrating.

Family man: Kofi Annan and wife  Nane Lagergren Annan
Very little has been know about Kofi Annan’s private life and the family has remained private with little information in the public domain.

But Alternativeafrica.com can reveal authoritatively that late Kofi Annan had more than just official relationship with Nigeria. He was more a Nigeria as he was a Ghanaian.

His first sojourn in marital life began with a Nigeria socialite -Titi Alakija.  Kofi Anna first married Titi Alakija, in 1965. Together they had a daughter, Ama, and a son, Kojo.

Annan separated with Titi in the late seventies but he remained an involved parent and lived with his son Kojo for a while after his separation with the mother.

After several years of living apart from his first wife, in 1981, Annan fell in love with Nane Lagergren, a lawyer at the U.N.

Nane was divorced and has a young daughter, Nina, from her first marriage.

His work at the UN

He went on to work in several capacities at the UN Headquarters including serving as the Under-Secretary-General for peacekeeping between March 1992 and December 1996.

He was appointed as the Secretary-General on 13 December 1996 by the Security Council, and later confirmed by the General Assembly, making him the first office holder to be elected from the UN staff itself.

He was re-elected for a second term in 2001, and was succeeded as Secretary-General by Ban Ki-moon on 1 January 2007.

As the Secretary-General, Annan reformed the UN bureaucracy; worked to combat HIV, especially in Africa; and launched the UN Global Compact.

He has been criticized for not expanding the Security Council and faced calls for resignation after an investigation into the Oil-for-Food Programme.

After leaving the UN, he founded the Kofi Annan Foundation in 2007 to work on international development.

In 2012, Annan was the UN–Arab League Joint Special Representative for Syria, to help find a resolution to the ongoing conflict there.

Annan quit after becoming frustrated with the UN’s lack of progress with regard to conflict resolution.

In September 2016, Annan was appointed to lead a UN commission to investigate the Rohingya crisis.

Kofi Atta Annan was born in Kumasi on April 8, 1938. After receiving his early education at Ghana’s elite Mfantsipim School, Annan attended the College of Science and Technology in the capital of Kumasi in 1958 . At the age of twenty, he won a Ford Foundation scholarship for undergraduate studies at Macalester College in St. Paul, Minnesota, where he studied economics.

Even then he was showing signs of becoming a diplomat, or someone skilled in international relations, Annan received his bachelor’s degree in economics in 1961. Shortly after completing his studies at Macalester College, Annan headed for Geneva, Switzerland, where he attended graduate classes in economics at the Institut Universitaire des Hautes Etudes Internationales in Geneva, Switzerland.

Following his graduate studies in Geneva, Annan joined the staff of the World Health Organization (WHO), a branch of the United Nations. He served as an administrative officer and as budget officer in Geneva. Later UN posts took him to Addis Ababa, Ethiopia, and New York City, New York.

Annan always assumed that he would return to his native land after college, although he was disturbed by the unrest and numerous changes of government that occurred during the 1970s.

Annan became the Alfred P. Sloan fellow at the Massachusetts Institute of Technology. At the end of his fellowship in 1972, he was awarded a master of science degree in management. Rather than return to Ghana upon graduation, he accepted a position at the UN headquarters in New York City.