Nigeria: Ooni of Ife’s message of strength and equality during Brazil tour

The Ooni of Ife, Oba Adeyeye Enitan Ogunwusi, the Ojaja II, the spiritual leader the Yoruba people and one of the most important personalities from Nigeria, recently visited Brazil on a 10-day tour of the country. He delivered a message of strength and equality to all Afro-descendants in Brazil and reminded them of their noble origins.

He is the 51st leader of the Ile-Ife kingdom—which is considered the ancestral home of all Yoruba people throughout the world. The Ooni of Ife said that Afro-Brazilians descend from kings, queens, princes, and princesses and that the black people were not slaves but enslaved.

Fifty percent of Brazil’s 215 million people are Afro-descendants. More than 4 million captured Africans arrived in Brazil before the 19th century and a significant number were of Yoruba ethnicity. The Yoruba culture is the most evident in Brazil’s Afro-Brazilian religion of Candomblé, where the Yoruba orisha deities are worshipped.

“Afro-Brazilians are excited to receive the Ooni of Ife because Yoruba is one of the cultures that was planted in Brazil when our ancestors were enslaved,” Luanda Nascimento, an Afro-Brazilian who attended several of the Ooni of Ife events in Rio de Janeiro, says. “It’s very significant that a king who represents the Yoruba people in Africa leaves his country to come to Brazil and declare Salvador the Yoruba capital of the Americas.”

The Ooni and his entourage stand in front of the Christ Redeemer statue in Rio de Janeiro.Photo Credit – Agencia Brasil

Salvador is considered to be Brazil’s blackest city and while there, the Ooni declared the Salvador and Ile-Ife twin cities.

For Afro-Brazilian religion worshippers, the Ooni’s visit came at a time when they are experiencing the worst religious intolerance in decades. Many religious temples in Rio de Janeiro have been destroyed in the last year in an attempt to drive them out of the community. The Ooni of Ife is Christian and he personally received Afro-Brazilian religious leaders in Rio de Janeiro and Salvador. He also said that religious intolerance is unacceptable and that followers of different religions seek God in different ways, but that everyone has the same destiny.

“The Ooni of Ife is also coming at a time when our Afro-Brazilian religious centers are being physically attacked. This is the reason we are so excited,” Nascimento added.

“He’s a very big king,” Olá Femi, a Nigerian of Yoruba descent who has lived in Rio de Janeiro for five years, says. “He is very respected at home.”

But even the non-adherents of Afro-Brazilian religions clamored to see the Ooni when he visited Salvador, Bahia, and Rio de Janeiro. The visit gave young Afro-Brazilians the opportunity to strengthen their connection to their African ancestry. Thousands of young people dressed in outfits of African cloth at a celebration to commemorate the Ooni’s visit.

Take a look at photos from his trip below. 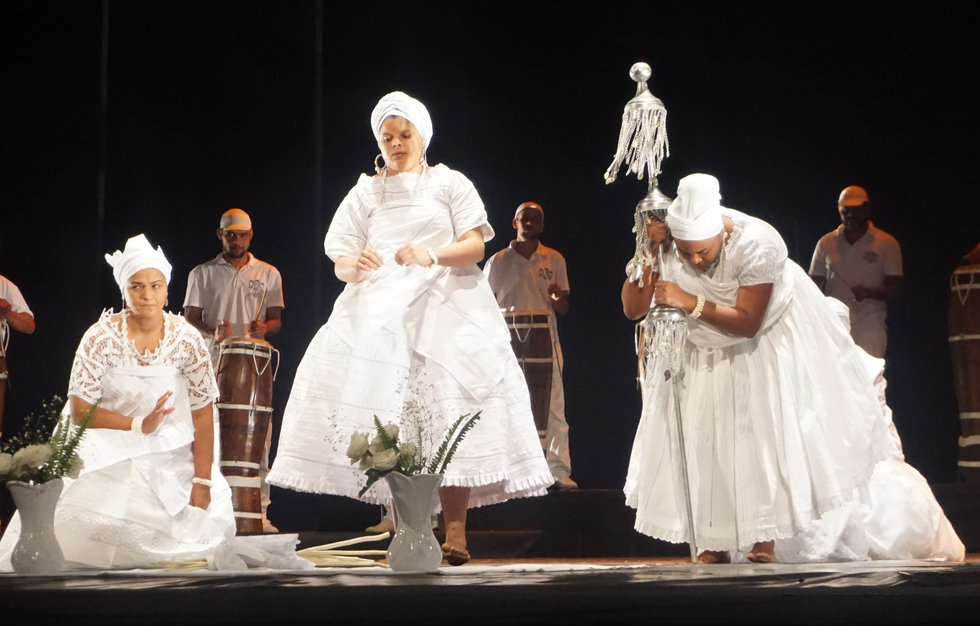 Brazilian women recreated a Candomblé religious ceremony in a performance for the Ooni of Ife.Photo by Kiratiana Freelon. 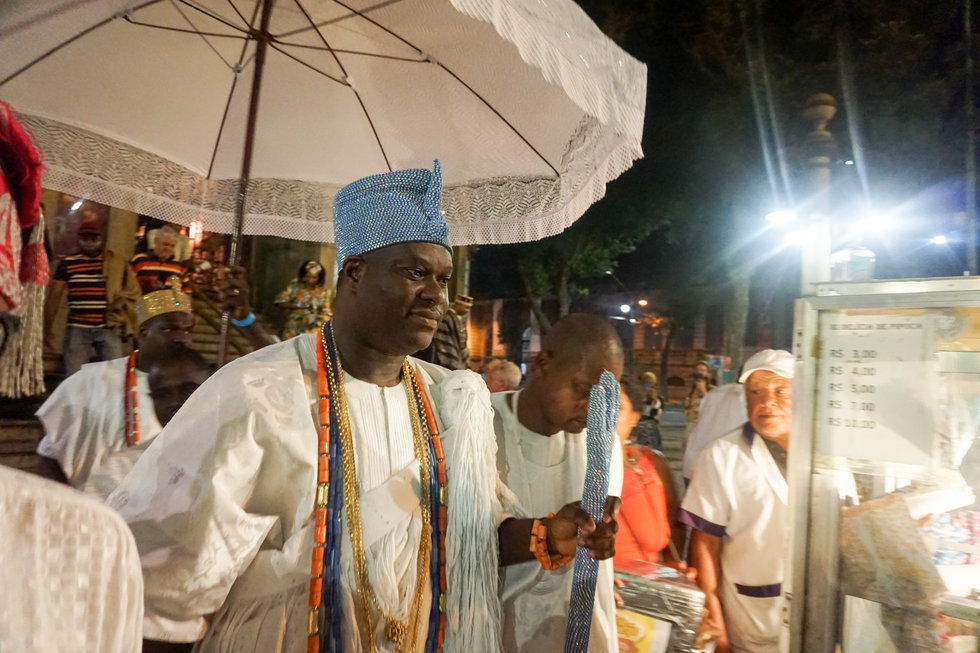 The Ooni of Ife exits the Municipal Theater of Rio de Janeiro as a popcorn vendor looks on.Photo by Kiratiana Freelon. 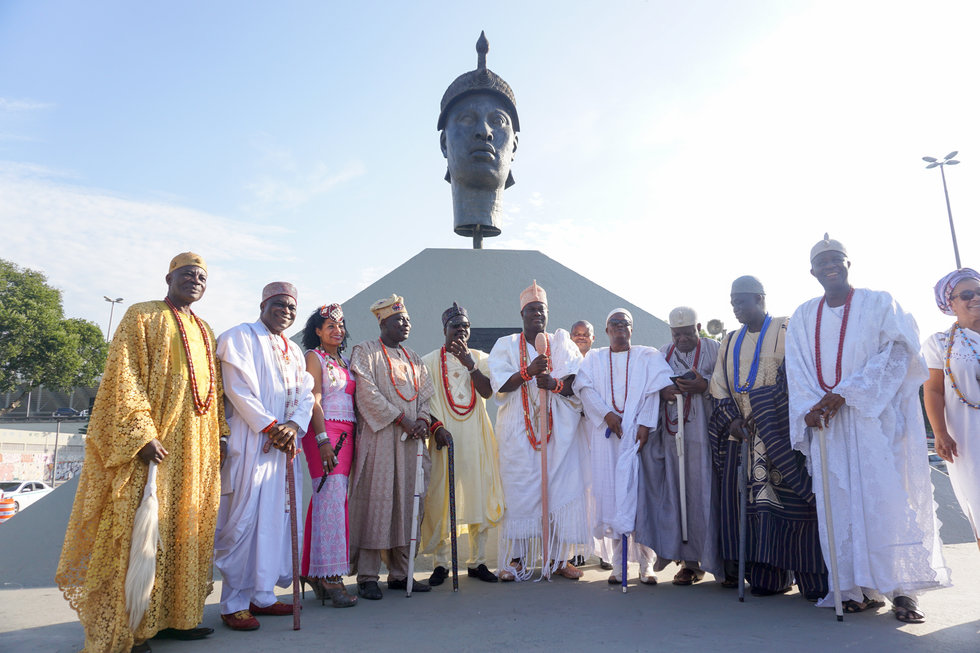 The Ooni and his entourage stand in front of the Zumbi statute in Rio de Janeiro. Zumbi is considered the greatest Afro-Brazilian leader to have ever lived. Zumbi was a leader of a Maroon community in 17th century Brazil.Photo by Kiratiana Freelon. 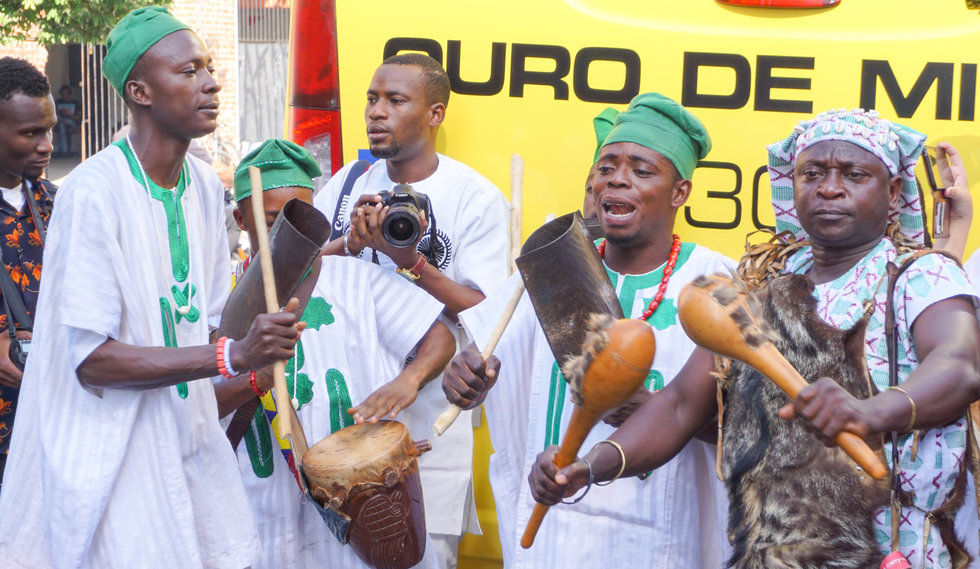 Wherever the Ooni of Ifé went, his musicians preceded him.Photo by Kiratiana Freelon. 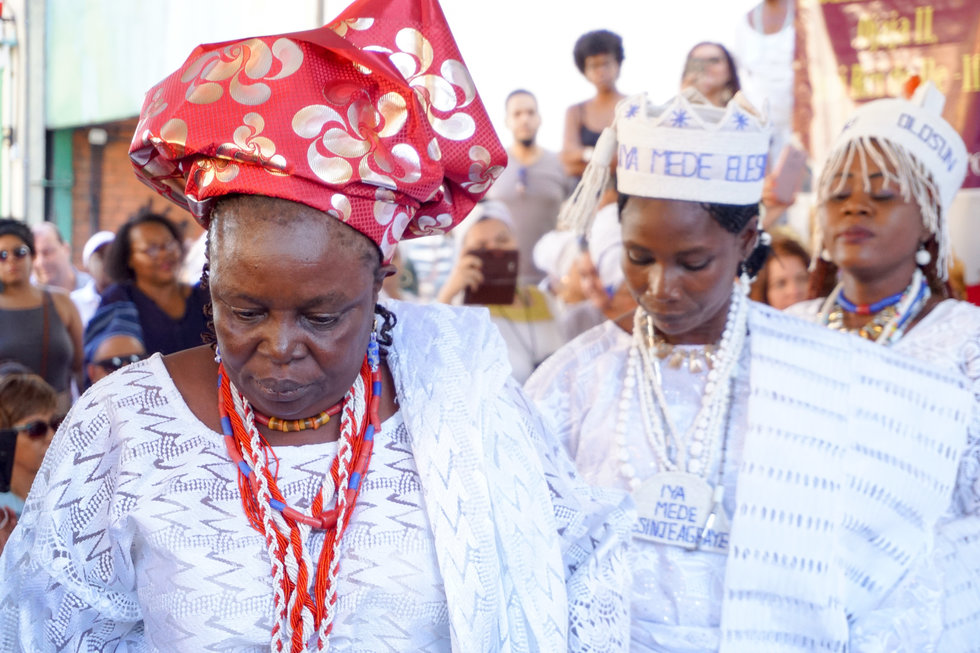 The Ooni also traveled with an entourage that consisted of women. These women danced to a traditional Candomblé song.Photo by Kiratiana Freelon. 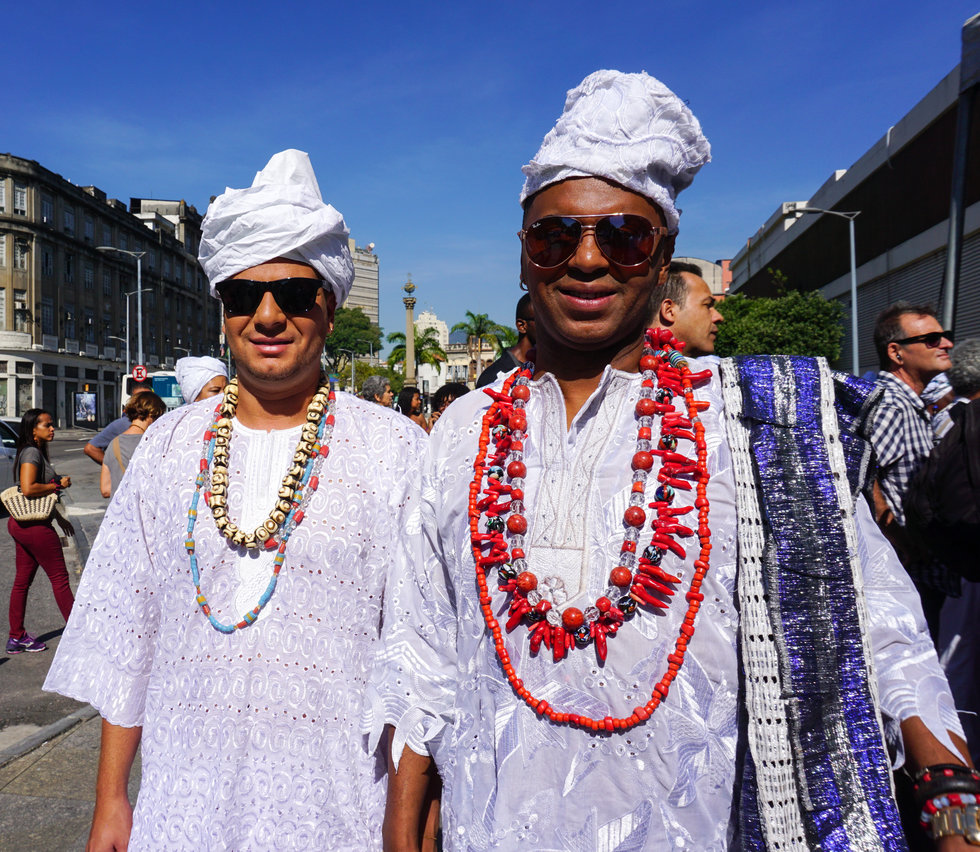 Two Candomblé worshippers came to see the Ooni of Ife when he visited the Valongo Wharf. The Valongo wharf is the port that received the most captured Africans in the world. 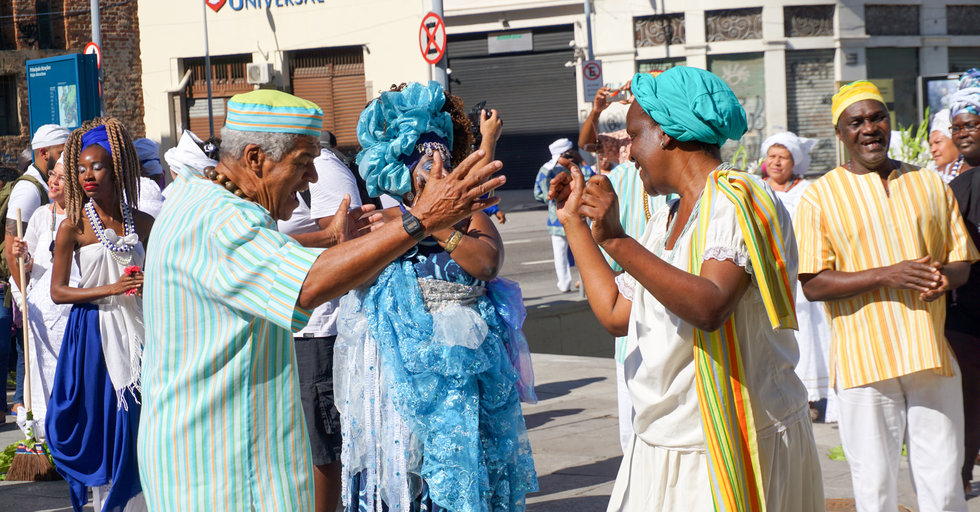 The Jongo dancing group of Pinheiral in Rio de Janeiro performed for the Ooni of Ifé. Jongo is a dance that enslaved Africans created on the plantations of Rio de Janeiro and Sao Paulo. The rhythms come from Africa.Photo by Kiratiana Freelon.