In a statement quoted by Reuters, the authorities in Jiang’an county said the blast happened at a chemical plant run by Yibin Hengda Technology.

Photos on Chinese social media showed a huge fire and plumes of smoke rising from the facility.

It is not clear what caused the explosion.

According to China news platform, Xinhua the fire, which broke out on Thursday evening, had been put out early on Friday. Those injured in the blast were in a stable condition.

Authorities have begun an investigation, the news agency said. 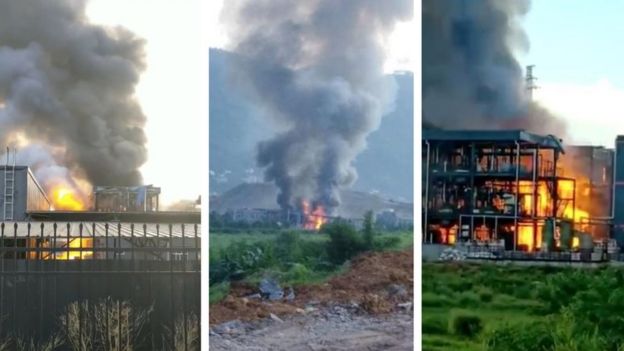 Yibin Hengda makes chemicals for the food and pharmaceutical industries.

Local media also report that the three-storey buildings of the factory burnt down to their steel frames and nearby buildings had their windows shattered.

In 2015, 173 people died in an explosion at a chemical warehouse in the north-eastern port city of Tianjin.

An official investigation into the blast found that corruption, political connections and official collusion allowed corners to be cut and safety systems to be overridden.