GORONGOSA NATIONAL PARK,  June 23, 2018, (AltAfrika)  — The African wild dogs are back. There are just 14 of them, far fewer than those that roamed Mozambique’s Gorongosa National Park before the nearly two-decade civil war that started in the 1970s. As up to a million people lost their lives to violence and famine, much of the park’s wildlife also was wiped out — including the wild dogs, an endangered species vulnerable to snares and disease.

Now they have been re-introduced to Gorongosa, carnivores unleashed on plant eaters as part of an intricate conservation project that aims to restore a diverse ecosystem at the southern end of Africa’s Great Rift Valley.

It’s complicated. Architects of the project — a joint venture between a non-profit group founded by American philanthropist Greg Carr and the Mozambican government — are wrestling with big-picture ideas about what restoration even means in a world whose wild places face intensifying pressure from human encroachment and climate change.

“We can’t go back to what exactly it was,” said Marc Stalmans, science director at the 4,067-square-kilometer (1,570-square-mile) park. “Has the environment changed over the last 50 years in a way that certain previous states can no longer be attained? Did animals move across a much larger landscape during certain seasons, and is this no longer possible nowadays with increased human densities and expanded agriculture?”

Anti-poaching efforts have helped populations of sable, hippo, elephant and other species to begin recovering. But there is more to it than trying to revive the natural order.

In its heyday, before the end of Portuguese colonial rule in 1975, the park drew celebrities like John Wayne and Gregory Peck to central Mozambique. However, it was located in one of the poorest areas in a country ranked among the world’s poorest, and black Mozambicans were excluded from meaningful involvement, according to warden Pedro Estevao Muagura.

He said education, farming and other programs designed by Carr’s Gorongosa Restoration Project to help the 200,000 people living around the park are critical to success within its boundaries. About two-thirds of the project’s $12 million budget this year is being spent outside the park; major donors include the United States Agency for International Development.

“To me, restoration means to recover what was destroyed. Not only to recover, but to improve. The center of everything, what we are doing, is the people,” Muagura said at the park’s main camp at Chitengo, where a bullet-pocked wall segment still stands as a reminder of the civil war.

He spoke over breakfast as a vervet monkey loitered nearby, eyeing Muagura’s food; staff keep a slingshot handy in case the monkeys get too aggressive, though a sign assures guests that there is no intent to harm them.

Baboons also wander the camp and are plentiful outside its fence. Leopards, a particular threat to baboons, were thought to have been exterminated in Gorongosa. On March 29, however, a Mozambican guide driving with Finnish and American tourists at night spotted a male leopard in a possible sign that the elusive species is returning.

“I knew there were other leopards in the park, but no one believed me,” said a delighted Tato Alexandre Joao, a worker at Chitengo camp.

Joao once was a poacher — in 2004, he caught a leopard in a snare, and sold the skin to feed his 10 children. He has since renounced illegal hunting, and now tends the swimming pool and does other jobs.

More lion cubs have been born in the park. And on an April morning, the newly arrived wild dogs — six females and eight males — trotted and lazed in a large enclosure where they were getting to know each other, establishing a hierarchy before being released into the wild on June 16.

The tawny, big-eared predators were darted and delivered to Gorongosa by the Endangered Wildlife Trust, a group that intensively manages the species in South Africa, promoting genetic diversity by moving males around fenced, relatively small wildlife areas not connected to each other.

“We try to mimic natural processes,” said David Marneweck, head of the group’s carnivore conservation program. The wild dogs — which use stamina and coordination to wear down fleeing prey, unlike lions and leopards that ambush in explosive sprints — will keep herbivore populations healthy by targeting old or weak animals, he said.

Observing the wild dogs from a vehicle, Carr and Marneweck discussed the potential for conflict between the wide-ranging carnivores and people. 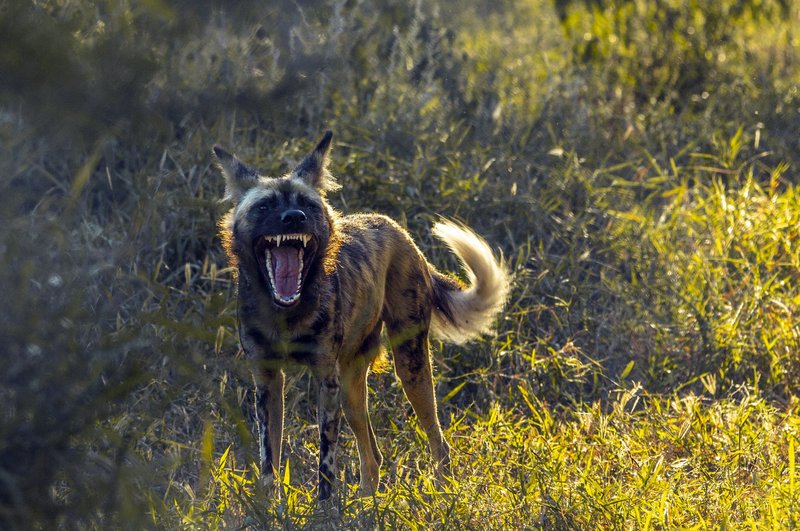 “Let’s say you have a relatively busy road. Will the dogs recognize that as a boundary, or do we hope they do?” asked Carr, a former technology entrepreneur who spends about half the year in Mozambique and is working to expand Gorongosa’s conservation area into wildernesses up to the Zambezi river, to the northeast.

“We sort of have three natural boundaries,” Carr said. “But then going to the west, you run into humans pretty quick. Do they stay clear of humans, though?”

“They try and avoid people at all costs,” Marneweck replied. Though he added: “If they go there, they’re going to eat some livestock.”

The work at Gorongosa was praised by Stuart Pimm, a Duke University conservation scientist who is not involved and said the reintroduction of key predators will restore “the sort of mix of species that you would expect” even if it is difficult to predict the exact impact on various species of flora and fauna.

He calls it a “Sistine Chapel debate,” citing the aftermath of the late-20th century restoration of Michelangelo’s frescoes at the Vatican. Much as opinions of that work were divided — some criticized it as garish, while others praised it as as vivid — conservationists disagree over whether restorations really restore biospheres, or create something that is less than genuine.

The introduction of predators can have unexpected consequences. Some experts have described a kind of chain reaction in Yellowstone National Park in the United States after the mid-1990s reintroduction of gray wolves there, saying stressed elks grazed less easily and had fewer offspring because of the presence of carnivores, which in turn contributed to new tree growth. Others say it is difficult to prove this phenomenon, known as “landscape of fear,” and that drought and human activity could also influence the environment.

“People are still arguing” about the impact of wolves at Yellowstone, said Rolf Peterson, a wildlife ecologist at Michigan Technological University.

An Associated Press team that visited Gorongosa in April flew over the park in a helicopter, spotting hippos and crocodiles splashing in a floodplain, a herd of more than 100 buffalo and numerous waterbuck (a 2016 census counted more than 45,000). On an afternoon drive, several elephants were seen in an area dense with palm trees. Conservationist say elephants, which are intelligent with strong family bonds, were often hostile and aggressive to people for years after the civil war, a legacy of the trauma of ivory trafficking.

As night fell during the drive, a civet cat scurried in front of the vehicle, its eyes bright in the headlights. The darkness was alive with the trill of insects.

Gorongosa’s team is expanding restoration research, this year deploying flood meters to monitor water levels and their duration “as these have a major influence on the vegetation production and animal movements,” according to Stalmans, the science director. They are also searching for fossils to get an idea of species and the environment in the Gorongosa area in the very distant past, which could help inform decisions about its future.

“Ecosystems come back and there’s restoration, but they’re almost never the same as they were before,” said Rene Bobe, an Oxford University paleobiologist whose finds include a fragment of a shark tooth, an indication that there was sea life millions of years ago in what is today an inland area.

“So what comes back is something new,” said Bobe, a Chilean who has also worked on paleontological projects in Kenya and Ethiopia. “You cannot go back in time, in a way. We see this in the fossil record, happening over and over again.”

Gorongosa’s new pack of wild dogs, meanwhile, is settling well. The “alpha” female is pregnant and is probably looking for a safe den to give birth, said Paola Bouley, the park’s associate director of carnivore conservation. The groundwork for reintroduction of the species began long ago with intensive efforts by rangers to curb poaching and make the habitat safer for animals, she said.

“That’s an important lesson in restoration,” Bouley said. “A system has to be ready to receive these species so we succeed not just for one month, or one year, but for 10 years and onwards.”

At a recent ceremony, students at Gorongosa bestowed names in the local Sena language on the African wild dogs. The names include Ndarassica — “I am lost” — and Ndapiona — “I am found.”