London, June 8, 2018 (AltAfrika)-Renowned Nigerian author and feminist, Chimamanda Adichie, has expressed her misgivings over some preferential treatments given to women.

Adichie spoke against men opening doors for women and also against giving aids to women and children first in case of tragedies, simply because they are perceived as weak.

She said this while appearing on the Trevor Noah show, a daily show and an American programme on Thursday.

The show is an Emmy and Peabody Award-winning one that looks at the day’s top headlines through a sharp, reality-based lens.

According to Adichie, opening the door for a woman should not be out of chivalry; rather, people should be open to helping and being courteous, regardless of gender. 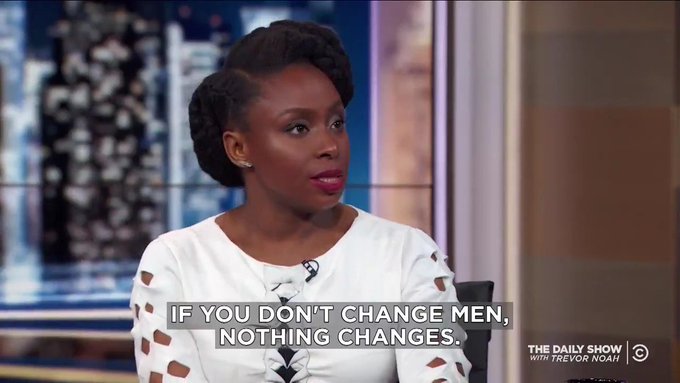 “Men have to be on board. You can change women all you want — if you don’t change men, nothing changes. Because we share the world.”

Chimamanda Ngozi Adichie explains why men are important for the feminist movement: https://on.cc.com/2xPY9bk

She said, “I think, just like holding the door shouldn’t be gender-based because we should open the door for everyone.

“I hold the door for men and women. I think the idea of sort of holding the door for a woman because she is a woman, I have trouble with.

“I’m quite happy for people to hold the door for me; I hope they are not doing for the sort of idea of chivalry.

“Because chivalry is the idea of women are somehow weak and need protection, but we know that there are many women who are stronger than men,” she said.

She went on to express her disdain for the idea of people always saying women and children should be rescued first in times of tragedy, rather than saving the weak and the unwell.

“I think actually it is the people who are weak and unwell who should leave first,” she said.

News Agency of Nigeria reports that Adichie frequently comes under ‘fire’ over her unwavering feminist comments during interviews.

Adichie trended in April when she said that she was upset that the Twitter bio of former U.S. presidential candidate, Hillary Clinton, began with ‘wife’ despite her numerous achievements.

NAN reports that Adichie’s feminism campaign has been a pivotal crux of her writing, as her characters centre around powerful women who are usually dwarfed by the patriarchal system in their environments.

Her TedX talk, ‘We Should All Be Feminists,’ was sampled on American singer Beyonce’s hit song ‘Flawless’ and was also part of Beyonce’s performance routine at 2018 Coachella.

In 2017, Adichie released a small book titled – ‘Dear Ijeawele or A Feminist Manifesto in Fifteen Suggestions.’

Her novel, ‘Americanah’, was recognised as one of the 15 remarkable books by women that are shaping the way fiction was being written and read in the 21st century.