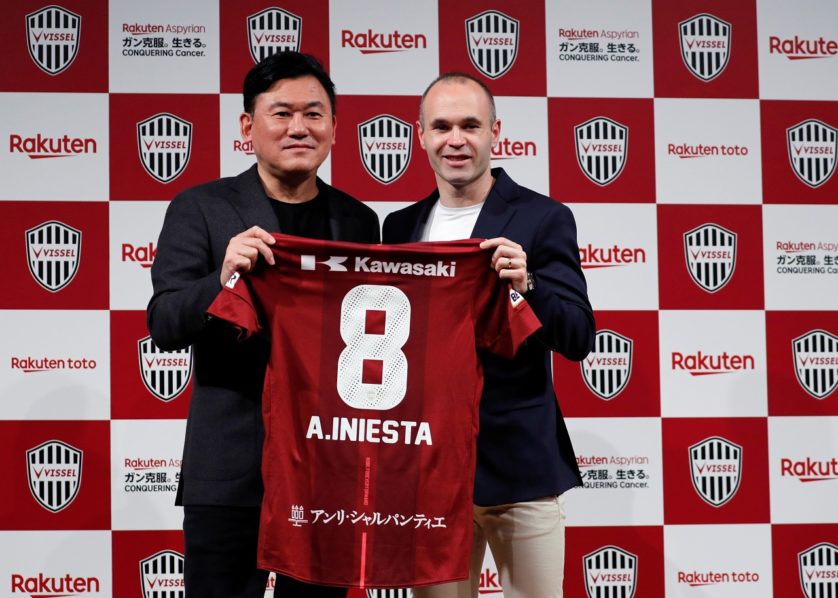 Spain midfielder Andres Iniesta poses with Hiroshi Mikitani, Chairman and CEO of Rakuten Inc and the owner of Vissel Kobe, at a news conference to announce signing for J-League side Vissel Kobe in Tokyo, Japan May 24, 2018. REUTERS/Toru Hanai

London, May 24, 2018 (AltAfrika)-Spain midfielder Andres Iniesta poses with Hiroshi Mikitani, Chairman and CEO of Rakuten Inc and the owner of Vissel Kobe, at a news conference to announce signing for J-League side Vissel Kobe in Tokyo, Japan May 24, 2018. REUTERS/Toru Hanai

Barcelona legend Andres Iniesta joined Japan’s Vissel Kobe on Thursday, the club’s owner Hiroshi Mikitani said, describing him as a “world-class” player.“I am pleased to announce today that Andres Iniesta will be signing up to play with Vissel Kobe after his historic career at FC Barcelona,” Mikitani told reporters in Tokyo.

The 34-year-old Spanish World Cup winner, who lifted 32 major trophies and made 674 appearances for Catalan giants Barca was unveiled by Vissel at a glitzy news conference in Tokyo.

“This is a very special day for me. This is a very important challenge for my career,” said Iniesta, set to pocket an estimated annual salary of $30 million.

“The J-League will hopefully spread in Asia. I’d like to help with that,” added Iniesta.

Mikitani said Iniesta “plays the most beautiful soccer in the world.”

The Spain legend’s decision to choose Kobe arguably represents Japanese football’s biggest transfer coup, with many top players now moving to cash-rich Chinese clubs in the twilight of their careers.

It also comes as a timely boost to the J-League, which used to attract luminaries such as Brazilian great Zico and former England star Gary Lineker when it began in 1993 but has struggled to attract marquee players in recent years.

Glittering career
Danish legend Michael Laudrup, himself a former Barcelona fan favourite and one of Iniesta’s boyhood heroes, also played for Vissel in 1996-97.

Iniesta, who famously scored the winning goal for Spain against the Netherlands in the 2010 World Cup final, had been top of Mikitani’s wishlist.

The billionaire businessman is also the founder and CEO of Rakuten, Barcelona’s main sponsor, and was heavily in involved in the deal that brought Iniesta to Japan.

Iniesta announced last month that he would be leaving Barca at the end of the season, bringing to an end a 22-year association with the club.

He played his final game for Barcelona in a 1-0 win over Real Sociedad at the weekend in an emotional farewell to the club he joined as a schoolboy.

Amid fevered speculation as to his next move, the 34-year-old had on Wednesday posted a photo of himself and Mikitani in what appeared to be a private jet, along with emojis of the Japanese flag and a football.

Many Japanese fans retweeted the photo of the player shaking hands with Mikitani and welcoming him to the country, while another user posted a cartoon meme of Iniesta dressed in a wizard’s cloak and waving a wand.

Tributes
His departure from Barcelona drew strong tributes from the football world.

Real Madrid coach Zinedine Zidane said the midfielder should have won the Ballon d’Or in 2010 for clinching the World Cup with Spain, when he was beaten to it by Lionel Messi.

“I think he really deserved to win the Ballon d’Or when he won his World Cup, he had an exceptional year and he finished the World Cup by winning it, by scoring (the winning goal in the final), so obviously that year he would have deserved it,” Zidane said at the end of April.

It was the period when Iniesta was arguably at his best, as Barcelona won three consecutive league titles under Pep Guardiola, as well as the Champions League twice.

He is still going to play for Spain in this summer’s World Cup in Russia before likely ending his international career. He will join his new team mates afterwards.

Iniesta had been linked to a move to Chinese Super League side Chongqing Lifan but they, like Vissel initially, denied the rumours.