London, May 2, 2018 (AltAfrika)-Liverpool’s Mohamed Salah, Roberto Firmino and Sadio Mane became the most prolific front three in Champions League history on Wednesday when Mane scored in the ninth minute of the 4-2 defeat to Roma in the second leg of the Champions League semifinal.

The three players have combined for 29 goals in the Champions League this season, surpassing the 28 goals scored by Real Madrid’s trio of Cristiano Ronaldo, Gareth Bale and Karim Benzema in 2013-14.

Salah and Firmino have each scored 10 goals in the competition this season, with Mane reaching nine goals following his opening strike.

Liverpool went through 7-5 on aggregate to reach the final for the first time since 2007, but it was the first time they were defeated in the Champions League this season. 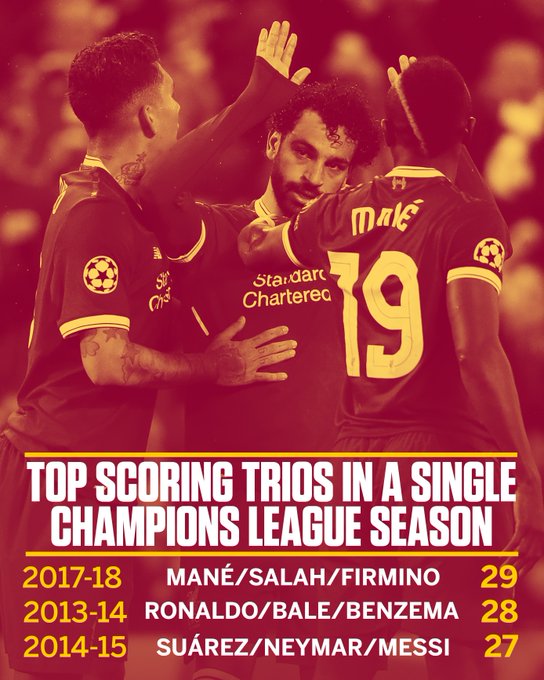 Named the Premier League player of the year by the media and by the players, Salah scored twice in the first leg against his former team and has scored 43 goals in all competitions, becoming the first Liverpool player since Ian Rush in 1986-87 to surpass 40 goals in a season.

Liverpool also became the third team to score 40 goals in the Champions League, not including qualifying, after Georginio Wijnaldum’s 25th-minute tally. Barcelona scored 45 goals in 1999-2000 and Real Madrid scored 41 in 2013-14.

And, after Radja Nainggolan scored in the 86th minute and again on a penalty in added time, the teams combined for 13 goals over the two legs, marking the second-highest total ever reached in the semifinals. Eintracht Frankfurt and Rangers combined to score 16 goals in the 1959-60 European Cup.