New Face of Feminism: Chimamanda Ngozi Adichie on her #MeToo moment at age 17

Writer Chimamanda Ngozi Adichie isn’t afraid of controversy. She tells Susannah Butter about her experience of assault and why the Windrush scandal is ‘immoral’

Ever since she wrote her essay We Should All Be Feminists, novelist Chimamanda Ngozi Adichie has been hailed as an unofficial women’s laureate. Beyoncé sampled her in the song Flawless, sending Adichie’s novels Half of a Yellow Sun and Americanah to the top of bestseller lists.

Over an apple juice at The Rosewood Hotel, Adichie, 40, has regal poise and a direct manner. Her hair is combed back into high bunches on top of her head and she proudly wears clothes by Nigerian designers — a tailored green top and a skirt made of red and blue ribbons. But she wasn’t always so confident. We are talking about how the #MeToo movement is redefining what’s consensual when she says she has experienced an abuse of power herself. “If I talk about it, it’s going to become the news in Nigeria and I don’t know if I have the energy for that. But it happened.” 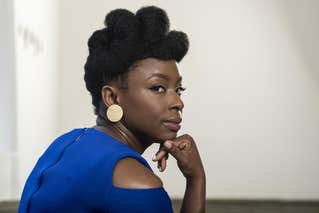 When she was 17, she met a powerful man in the media back in Nigeria to ask for support launching her poetry book. They had a pleasant conversation. But before she knew what was happening, he slipped his hand under her shirt, squeezing her breast. Taken aback, she froze. Then she pushed his hand away, but gently, so as not to offend.

“The #MeToo movement is long overdue,” she says now, sliding her red flip-flops off, a plaster on her little toe. “It is a chronicle of inhumane injustice. For so long women didn’t tell their stories because someone wouldn’t believe them, or would blame them. Now that women are telling their stories and there are consequences for perpetrators I feel a cautious optimism.

“I want more accountability for people in positions of power, and for people to become more aware of subtleties. People often meet their spouses at work, so it’s important to make that distinction about what’s consensual. It’s almost as though many men don’t know the difference. Women are bright enough to know.”

She acknowledges, though, that conversations about feminism are currently being carried out at a high pitch. “That’s why it’s important to talk about things in detail. It gives people less of a reason to say there’s a witch hunt going on.”

Adiche is familiar with backlashes. Last year, she said that the experiences of transgender women are distinct from those who are born female and as a result was inundated with hate mail.

“Somebody told me, ‘You are a murderer because your words are violence and your violence is killing trans women’. I didn’t think I had said anything bad and was hurt that I had been attacked by my tribe, who believe the same things about life. I am fundamentally very supportive of transgender rights but I don’t think I said anything wrong. It’s strange to me that we cannot acknowledge difference because we want to be inclusive. How can we talk about issues if we don’t acknowledge difference? 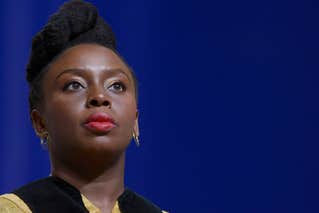 “It was isolating but in the end it felt liberating because if you are so terrified of falling, not that I was, but if you don’t expect to fall and then you do you know it’s not that much of a big deal.”

There is a wider point about the political Left. Adichie calls it her “ideological home” but adds: “It’s closed debate. You can’t question anything. People are terrified of saying what they think even though they might mean well. I sometimes feel it trivialises the big things. The noise around it felt like a deliberate misunderstanding. There’s a mob mentality’.”

She stands by her views, adding that she received supportive emails from the trans community as well.

So how is she bringing up her own daughter, aged two and a half? “I don’t want to be the crazy feminist mother; if she decides she wants a doll I’ll grudgingly give her a doll. I’m keen to raise her not thinking of gender, not whether she is doing what a girl should do. I’m just going to let her follow her own interests. So far she seems to likes tools and her father’s keys.”

Her daughter enjoys being read to. “She’s started to make thing sup, she’ll turn the pages and just blather on. It’s become normal to her that I’m on TV — she probably thinks all mothers have their pictures in magazines. I wonder if that’s healthy and if I need to hide the pictures. Oh, the anxiety of being a mother.”

Adicihe is in London for the Malaria Summit London, where she read out two stories she has written about her experience of the disease. Bill Gates, Prince Charles and 15 Commonwealth country leaders assembled to take action on malaria and on Friday the UK government and Commonwealth leaders pledged to halve malaria by 2023. This could save more than half a million lives.

“Because I grew up in Nigeria, malaria was a part of my childhood,” says Adichie. “I don’t remember a time when I didn’t know malaria, it was an inevitable part of our lives. Malaria was the reason you missed school and it takes up a lot of your life. Mine would start with this horrible aching feeling in my stomach. Then I would sometimes have nausea, fever and this heavy headache that would just not go away. You would feel utter exhaustion, like something had just been sucked out of you.”

Now, Adichie’s family mock her for how “obsessive” she is about protecting her daughter from the disease. They live between Maryland, near Washington DC, and Lagos. “My daughter smells like insect repellent all the time when we’re in Lagos. She hasn’t had malaria yet. I kind of know she will get it being in Nigeria but I don’t want her to until she’s at least five.”

She jokes that her focus on eradicating the disease is self-interested. “I find it exciting, just because I’m thinking about how it will affect my life. I won’t have that level of anxiety.”

“My family was fortunate — my father was a professor and I grew up on a university campus where there was a medical centre but there are many people who don’t have access to medicine. Because malaria is not a disease that is endemic in countries that are wealthy there is a difference in how it’s seen. It’s not a priority for wealthy countries because it’s not a disease there. I think that’s affected how it hasn’t yet been stamped out everywhere in the world.”

The Commonwealth’s approach is multi-faceted. “It’s not just about medicine, it’s also about prevention, getting people to know that stagnant water is a bad idea because that’s how mosquitoes breed.”

What does she make of the Commonwealth? “It’s a strange thing to me. There are still cultural connections. When I meet people from Kenya or India who grew up at the same time as I did they all read Enid Blyton as children, as did I. That’s what it means to have come from the Commonwealth, to have aspired to ridiculous things such as drinking ginger beer because we didn’t have it in our countries and in the books we read about people in England they did.”

Adichie was in the headlines this month for saying Meghan Markle should be the next Commonwealth leader and roars with laughter that her suggestion was taken seriously. “I wanted to be ridiculous. This is why I should stop my stupid jokes.”

She’s “sad” about the Windrush generation being deported. “It’s deeply immoral. It’s important to ask questions about race. If these people were from Australia, would they be deported? It’s a question of ‘are these people somehow less worthy of Britishness. It makes no sense.”

Does she have time to write in between campaigning? “I can’t tell you what I’m working on because I’d have to kill you.” She grins. “I don’t like talking about work in progress; I’m superstitious.”

She has a writing room in the US; in Nigeria she works in her bedroom. “I need time and space and quiet. Some people can cram it in and write anywhere and I envy them. I need physical space and creative space.” With a heavy voice, she says she’s not immune to the draw of internet-based distraction. “That’s part of the reason I’m not writing as much as I want to. I look something up and before I know it three hours have gone. It’s ridiculous, I just click on rubbish.”

She is still adjusting to fame. “There are times when I don’t want to be recognised because I’m in a bad mood or my vanity isn’t happy with me looking schlumpy, or I’m in my pyjamas or I haven’t put on lipgloss.”

Literary news bores her but she always has a few books on the go, non-fiction, fiction and poetry, and recommends The Dark Room by Rachel Seiffert. It’s about people trying to make sense of their grandparents’ complicity in the Holocaust.

The US is as much home as Nigeria but she “doesn’t even want to talk about” Trump, telling me she is sleep-deprived. “The standard is so low, the discourse is so crude. I think that’s probably why I’ve switched off. I’m just waiting for these four years to pass.”

London, however, is one of her favourite cities. “Whenever I come here I just feel happy. I don’t want to use the word ‘multicultural’ because I think it’s loaded but London feels welcoming. If I walk down the street in London I feel utterly comfortable. It’s the one true international city. New York has energy and verve but it’s still very American. London feels more open.”