London, March 24, 2018 (AltAfrika)-The United Nations Mission in Liberia (UNMIL) will formally wind down its operations in Liberia at the end of March. When the mission began operations in 2003, Liberia had been considered as a failed state. The infrastructure that existed in the country had also been decimated. 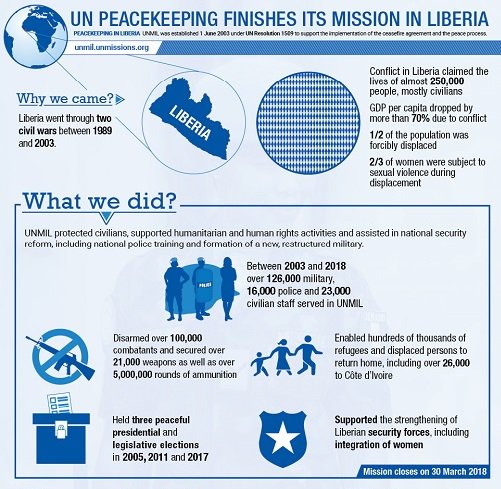 Next week, @UNMILNews completes its mission in #Liberia.

Liberians too are grateful for the impact the UN peacekeeping mission had on the country. “Through the United Nations today we have peace — at least Liberians will take upon themselves to be peaceful and we know their effort will not be in vein,” said Mohammad Sambola, a resident of Monrovia.

James Johnson, also a resident of Monrovia, said: “The UN had a great impact on Liberia; it was able to give us Liberians hope in going back to school and gave us hope for a better future.”

“I know that God is with us because the UN cannot continue to be here. We will continue to settle our own problem,” said Rachel Parker, a resident of Monrovia. She is grateful to the UN for its contribution to the peace process.

Liberia’s President George Weah assured the United Nations that peace would prevail in the country. “As UNMIL leaves Liberia peaceful, let me again reassure you of my government’s fullest commitment to the continuous consolidation of peace in Liberia and warmly welcome the continuous partnership and commitment of the United Nations system,” President Weah said. He was addressing the UN’s deputy secretary-general, Amina Mohammed, at the formal closing ceremony in Monrovia.

Liberia was the first country in Africa to elect a female head of state, Ellen Johnson Sirleaf. After serving two terms, she stepped down peacefully and ceded power to her political rival, George Weah, who beat the ruling party’s candidate, Joseph Boakai, in a runoff.

Mohammed was in Liberia on Thursday, a week before the end of the peacekeeping mission. “We know that today Liberians enjoy peace and UNMIL leaves behind the country that has great potential to achieve lasting stability, deepening its democracy and prosperity,” she said.

In a tweet, UNMIL said it made invaluable contributions to restoring peace to Liberia, and can be considered among the most successful missions in the history of UN peacekeeping.

“We believe it’s now under your leadership and up to the government with the full support of the United Nations and other international partners to continue to address the issues of poverty, youth and unemployment, illiteracy and the lack of basic infrastructure — infrastructure that connects your capital to the rest of the counties and therefore makes a whole of development for Liberia,” Amina Mohammed added.

nd unemployment, illiteracy and the lack of basic infrastructure — infrastructure that connects your capital to the rest of the counties and therefore makes a whole of development for Liberia,” Amina Mohammed added. 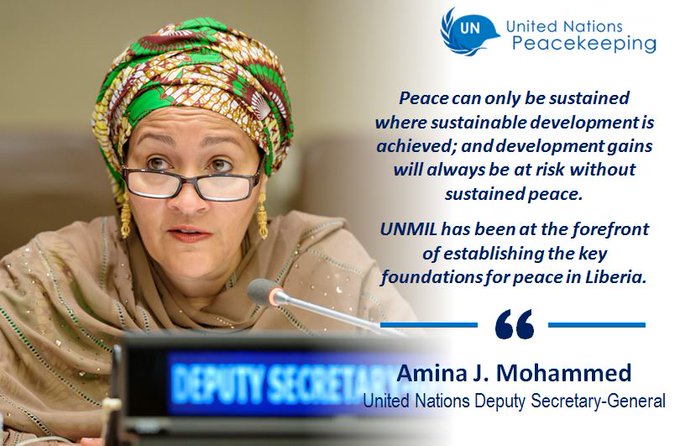 .@UNMILNews has made an invaluable contribution to restoring #peace to #Liberia

, and can be considered among the most successful missions in the history of @UN #peacekeeping: http://bit.ly/2EJ0DrU

UNMIL was sent to Liberia in June 2003 to restore order after two brutal civil wars. It was meant to support the implementation of the ceasefire agreement and the peace process. Liberia’s 14-year civil conflict had claimed the lives of about 250,000 civilians.

A gap to be filled

The gap they leave needs to be filled, said Samuel Korgar, a member of the Liberian Legislature. “One of the problems Liberia may face upon the departure of UNMIL could be a financial crisis, because a majority of the UNMIL employees that were employed here bought their items in Liberia and it gave some boost to the economy,” Korgar said.

Korgar, who is also a politician, added that the departure of the UN peacekeeping mission could create a financial vacuum. He said the government should see it as means to create job opportunities to improve the rural estate sector.