London, March 8, 2018 (AltAfrika)–Ethiopian Airlines scores another all-female flight crew feat as it expands its global footprint to the Argentine capital, Buenos Aires – its first such flight.

The flight takes off on the occasion of the International Women’s Day and according to the Addis Standard news portal the crew will be operating the B787 Dreamliner from Addis Ababa to Buenos Aires.

It is not the first time Africa’s top flier has dispatched an all women crew. In December 2017, they made history by sending one such team on an intra-Africa trip from Addis Ababa to Lagos.

An all-women team means the entire flight management team comprised of women: from the pilots and cabin crew to in-flight ramp operations as well as flight dispatchers on the ground.

December 2015: History for Ethiopian as it dispatches all-female operated flight 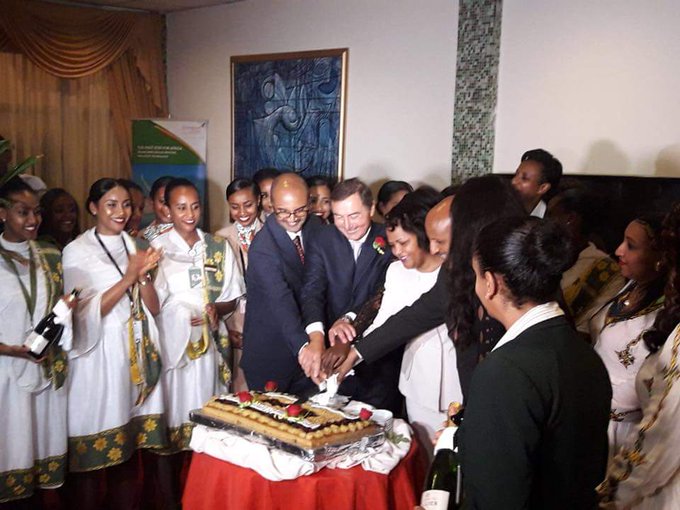 Double Congratulations to Ethiopian Airlines @flyethiopian ! On a all women

operated flight #inspiringgirlsinAfrica and on its 1st flight to #BuenosAires.
Thank you 4 bringing #Africa & #LatinAmerica closer!

Before last year’s Addis Ababa – Lagos flight, Ethiopian had in late 2015, dispatched a similar crew that flew passengers from Addis Ababa to the Thai capital, Bangkok.

At the time, Captain Amsale Gualu and co-pilot, Selam Tesfaye were handed the task of flying the crew and passengers. The historic nature of the mission lit up the face of Tesfaye who said she was happy to be part of the feat. ‘Its a legendary day for Ethiopian Airlines,’ she stressed.

They are the first operators on the continent to take delivery of the Boeing 787-9 dreamliner. The airline currently flies to over 50 African cities in what is the largest network by a national carrier.

Two major decisions made recently by the carrier include switching fully to digital processes in its operations and also the provision of free Wi-Fi access for travellers using its main hub, the Bole International Airport in the capital Addis Ababa.

Ethiopian – a member of the Star Alliance group in its seven decades of operation has become one of the continent’s leading carriers in terms of efficiency and operational success.

They command the lion’s share of the pan-African passenger and cargo network operating the youngest and most modern fleet to 95 international destinations across five continents.

Gender equality must be at the core ...