AfrikaTVArts & CultureNews Now
Home›AfrikaTV›Femi Kuti “One People One World”- A plea for global harmony and solidarity.

Femi Kuti “One People One World”- A plea for global harmony and solidarity.

London, Feb. 24, 2018 (AltAfrika)-For decades, Femi Kuti has been carrying the afrobeat torch lit by his father, Fela, and using music as a weapon to speak against political injustices in Nigeria and across the world.

On his forthcoming album, One People One World, released today, Femi and his band Positive Force continue their modern take on afrobeat, crafting 12 highly-political songs that showcase the endless possibilities of what you can do with the genre’s musical structure.

The new record, which will be Femi’s tenth album, also features more optimistic songs about love and humanity. Its title track, “One People One World,” is a plea towards global harmony and solidarity.

We caught up with Femi to talk about the politics behind these new songs, getting this son to play on the album, the fact he doesn’t listen to music anymore and we also get his many thoughts on the rise of Trump.

One People One World is out February 23 from Knitting Factory Records.

Let’s start with the lead single “One People One World,” why did you decide to name the album after it?

It’s because of the times we’re at. There’s so much hate and so much misunderstanding. In terms of climate change, if we don’t all understand we’re all one people living on one planet, we’re going to be in trouble as we’re already seeing. So, One People One World, it’s just to put it into a serious perspective in order to make people think in this direction.

There’s a message of unity behind the song.

Yeah, you could say so. Some tracks really don’t particularly deal with issues in Africa, but then, I still have to touch on those issues because I live here and see the problems. In the first track off the album, “Africa Will Be Great Again,” I say it’s important to give young people hope. I’ve tried to make it optimistic. Being real, but also optimistic, making people understand that if we put our energy in this direction, we can come out of these problems.

You have a few more uplifting songs and love songs throughout the record.

I wouldn’t say love in the sexual way. It’s the love of “let’s love one another instead of hate,” yes.

Like Fela, you’ve always used your music as a weapon against injustices. This now being your tenth album, what injustices are still around that you find yourself still singing against?

It’s basically the same. It’s just worse. If you look at the economy of Nigeria, when my father was releasing his music, it was two dollars to one Naira. Now it’s 400 Naira to one dollar. So you could say it’s 400 times worse than then. Today as I speak to you there’s fuel scarcity in Nigeria. We’re, I think, the fifth largest oil producing nation and we’re still suffering from corruption in the oil sector. We still don’t have electricity.

I think if Africa really stopped this corruption, we would be at the center of the world. Everything is here. We have the brains, but all our brains are leaving to develop other countries and be insulted outside their shores. It’s sad when we should be at the forefront of development and technology, in every sense. Africa needs to really think inwards.

But having said that, one must always remember where Africa is coming from. We have had about 17 years, I think from the eighth century until the 17th century of the Trans-Saharan slave trade. We’ve had 400 years of the Atlantic slave trade, 100 years of colonial rule, about 100 years of bad African government. You have to appreciate this history, so you can’t be too hard when you’re fighting these issues when you understand this history.

It probably will take us another 100 years to get our act together but we have to keep on fighting in this direction. After understanding this history, then it will be easy to confront the battles we’re facing.

Do you feel that Nigeria is in a worse situation now than it was 10 or 20 years ago?

People are worse off, the health sector doesn’t work. There’s no sector in this country that we can be proud of. If the people in power had even tried to do 10% or 20% of the repairs, then we wouldn’t be complaining today. With the health sector… when the president is sick, he goes to England or Europe for treatment. That speaks volumes. You’ll never hear the president of any European country or America go to any other country when he or she falls sick. 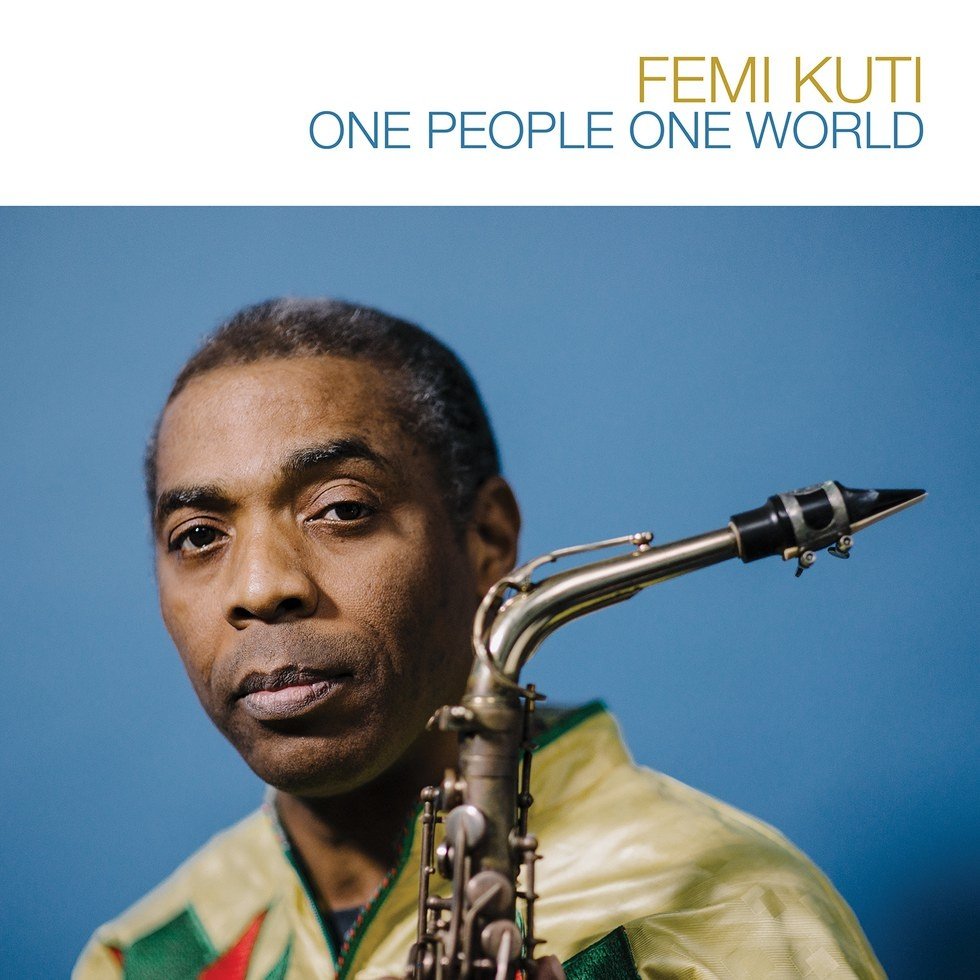 Trump recently called black nations “shitholes countries.” Is your album also a reaction to the rise of political movements like that of Trump?

I would say yes, but only because [these movements] have always been there. The album just comes out at a time where it’s so glaring. One has to ask a question: when Americans say, “my country,” when you look at history, do they really have the right to say that? I believe if we go to history, America was taken from the Native American Indians.

When this history is taught properly and truthfully, then we can all reflect on how we can look forward together and build a better world. And this is the way I see it. So, this album hopes that we can touch on all of these sensitive issues truthfully to move forward. I think people are afraid to talk about these issues because of the reaction and the battles that they will confront. But I believe it will bring the reverse. We need to talk about this history.

Africans today who defend Europe and America say, “We sold ourselves,” because this is what we’re taught in schools. When you understand the atrocities that were committed, they’re truly unforgivable. And nobody wants to talk about it because we have been so brainwashed to believe in lies that we even sometimes defend racism or hatred staring us directly in the face.

Like when Trump said “shithole,” you saw Africans coming to his defense. Because they don’t know any better. As president of the United States, he should not be even uttering such words. Because even if a country is a “shithole,” he shouldn’t be seen as downgrading but uplifting the “shithole.”

If you understand what I’m saying, America is supposed to be at the forefront of world development and embracing unity, love, and all these things they’re supposed to be talking about. But what we really have seen in at least a century, is that America has been instigating wars and bloodshed.

You’re known as carrying the torch for afrobeat. Were there any other genres or artists that influenced this album?

Nobody. In the last ten years I have not been influenced by anybody. I stopped listening to music around 2000 or 2001 because I wanted my music to be very pure and come from deep within me. I wanted to hear the melodies and create my own sound and this is what I have been doing. If you hear influences, like some people believe they hear influences, we can all say that yes, everybody is influenced by somebody. But I never wanted to move into a regular Caribbean or any kind of direction. I wanted music that I felt.

I see myself as a medium that higher forces use to create sound. So I am like engraved in this place where I must perform this honorable duty and inspire people and make people happy. And if I can’t do this as a musician, then I should move to something else.

Yes. I don’t go out of my way. I’m forced to listen if I go to party yes, or if I’m at The Shrine or at a festival. But I don’t go and say I want to listen to this, I want to be inspired by this person or that.

Album track “Best To Live On The Good Side” touches on some existential themes in which you sing, “We don’t know why we’re born. We live to die.” It made me wonder what kind of books you’re reading. What books does Femi Kuti read?

I read the book of life, which is my interactions with people and using my senses to read through whatever is going on around me. I have a very curious mentality and I try to be very abstract in my thoughts. I still do six hours of practice, during these mind-blowing sessions I have with myself, which I think is good enough. I read a lot of books growing up. I was very curious about why we’re born. From the Egyptian theory to Chinese or modern day Christianity or Islam.

Everybody really has the same theory of “we have to be good.” So why is there so much evil if there’s so much emphasis on this? Nobody really knows why we’re born. I think it’s probably the most baffling thing in the human mind. It’s very confusing and very touching, but we all agree it’s best to be humble, good, because we know from historical facts that people that are bad pay a very high price. That’s all this song is saying.

You released a music video for “One People One World” shot at The Shrine. How did The Shrine influence this album?

You could say The Shrine is the factory of my compositions because I do everything there. The ambience, everything, comes from The Shrine. It’s like the bakery where I cook everything. I play songs for at least a year—sometimes two or three years—before I go to the studio. It’s like painting for me. Everybody’s there when I start to put the song together and from the actions or reactions I know, “okay, probably add a little more blue to this melody, put a little more pink here, oh, purple will go here.”

What’s your favorite track on the new album?

I would have to say “Best To Live On The Good Side” probably, but they all are very important for me. I’ll have to take four. “One People One World,” because it catches you immediately. I like “Na Their Way Be That” because it’s a good, pure afrobeat groove. “Africa Will Be Great Again” has this feeling that is so different from the rest of them. It’s one of the favorite tracks when I play it at The Shrine.

And “Corruption Na Stealing,” although in the album version is very different from how we play it live. Many things I have incorporated in the song now are not in the album, but I had already done the recording before new inspiration came. People that know the song at The Shrine will be saying, “Oh, this is not there.” So I’ll be disappointed too. I probably will re-record just that track again, just make a single out of it.

My elder sister who is one of my biggest critics, she is getting on my nerves about it. She’s saying, “I don’t accept this. No. No.” So I might be forced to spend some money there.

Speaking of your family, your son, Omorinmade Anikulapo-Kuti, plays on this album.

Yes, he plays bass and piano. This was the most beautiful thing of the album for me. It was unbelievable. It was a feeling that is indescribable. There’s nothing to weigh the love you have and just to see your child be part of what you love doing—and doing it so well. It’s so beautiful, I can’t describe that feeling.

It will probably still take me a few more years to rewind back to that moment and just see it. That was probably one of the best moments of my life.