Even as he faces a potential deportation from Israel, 30-year-old Eritrean asylum seeker Johny Goytiom Kafl brims with satisfaction as he looks out upon thousands of fellow protesters rallying against the impending expulsions, all while peacefully secured by police

It’s such displays of civil action that he most admires about his adoptive home of the past nine years since he escaped one of the world’s most oppressive regimes, and then faced torture, kidnapping and abuse during his exodus throughout Africa.

“You are treated like a human being in Israel,” he said in fluent Hebrew. “Here I am not afraid. In Eritrea, I was afraid.”

Kafl, along with tens of thousands of other Africans, now fear their stay in the Holy Land is coming to an abrupt end. Israel has given many of them until April 1 to leave for an unnamed African destination — known to be Rwanda — in exchange for $3,500 and a plane ticket. Otherwise, they face open-ended incarceration.

Israel considers the vast majority of the nearly 40,000 migrants to be job seekers and says it has no legal obligation to keep them. The Africans, nearly all from dictatorial Eritrea and war-torn Sudan, say they fled for their lives and face renewed danger if they return.

As the world grapples with the worst refugee crisis since World War II, the issue has struck a raw nerve in Israel — established on the heels of the Holocaust. 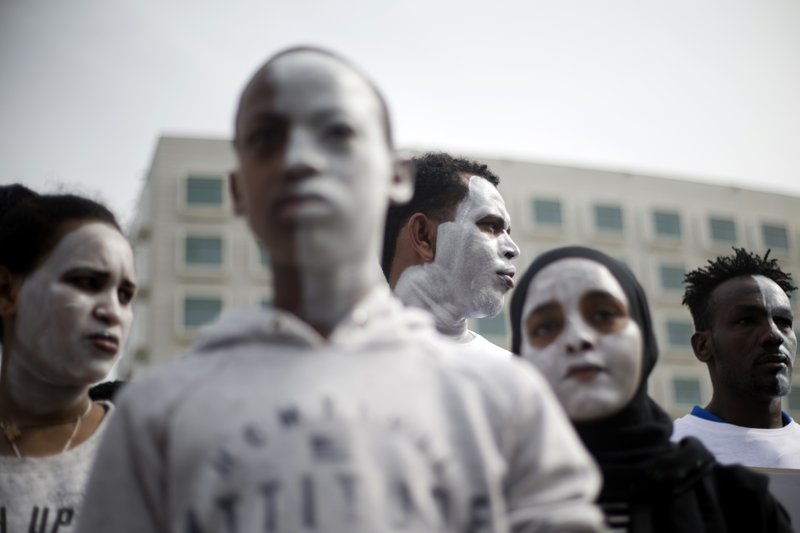 African migrants chant slogans during a protest in front of the Rwanda embassy in Herzeliya, Israel.. (AP Photo/Ariel Schalit)

Critics at home and in the Jewish American community have called the government’s proposed response unethical and a stain on Israel’s image as a refuge for Jewish migrants.

The optics of black asylum seekers accusing the country of racism has turned into a public relations liability for Israel, and groups of Israeli doctors, academics, poets, Holocaust survivors, rabbis and pilots have all appealed to halt the plan. But the government remains steadfast, bristling at what it considers cynical comparisons to the plight of Jews in Nazi Germany.

The Africans started moving toward Israel in 2005 after neighboring Egypt violently quashed a refugee demonstration and word spread of safety and job opportunities in Israel. Tens of thousands crossed the porous desert border before Israel completed a barrier in 2012 that stopped the influx.

But Israel has struggled with what to do with those already in the country, alternating between plans to deport them and offering them menial jobs in hotels and local municipalities.

Kafl, like many of his compatriots, fled Eritrea to escape its lifelong military conscription in slavery-like conditions and fears death if he returns. 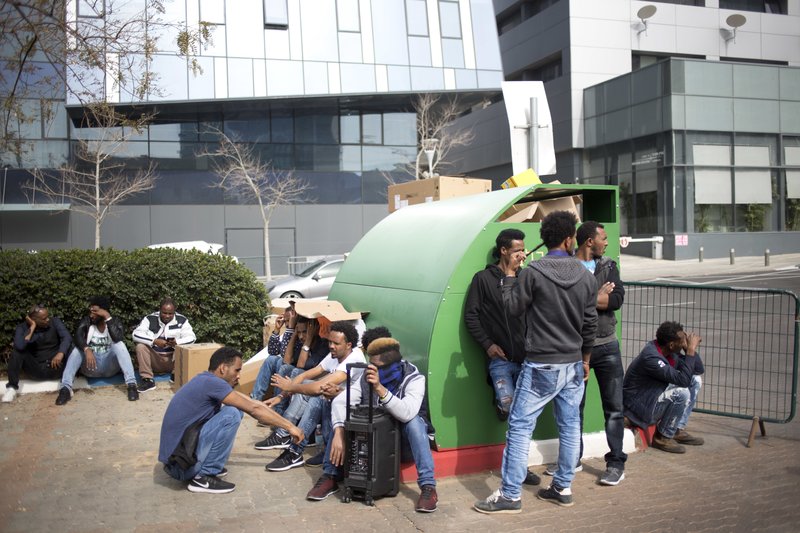 African migrants at their recent protest outside the Rwanda embassy in Herzeliya, Israel. (AP Photo/Ariel Schalit)

He has experienced both sides of Israel. His asylum request is still pending, and he has been locked up in a massive detention center in the remote southern desert. But he is also deeply grateful to the many Israelis who welcomed him and sympathized with his plight. He said he hopes to one day return the favor if the Eritrean regime is ultimately toppled.

“I knocked on the door of the country and said ‘save me.’ I will never forget the soldier who said ‘welcome,’ gave me food and called for a doctor. I got his kind of respect in Israel, not in Eritrea,” he said.

After the initial warm welcome, however, many turned against the migrants, particularly in the working class neighborhoods in south Tel Aviv, which have become known as “Little Africa.”

“They are abusing our democracy to live off our backs,” said Shefi Paz, who leads the local residents’ opposition. “They’ve ruined our community and ruined our lives.”

The government, dominated by nationalist parties, has denounced their prolonged stay and recently voted to begin deporting them to African countries with which they have reached secret agreements. They are believed to be Rwanda and Uganda, close allies of Israel, though they both deny any deal exists.

The government says it is going out of its way to accommodate humanitarian concerns. Women, children and families, for example, are exempt from the deportation order, as are those who escaped the genocide in Sudan’s western region of Darfur. It says it is expediting its refugee vetting process, and notes the Supreme Court has ruled the arrangement is legal and does not imperil those dispatched.

But that’s not what the migrants and their backers contend. 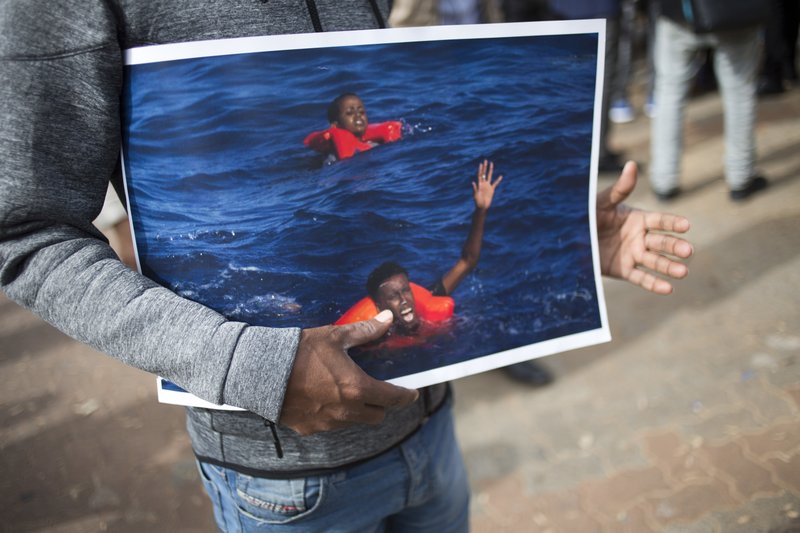 Sigal Rozen, of the Hotline for Refugees and Migrants advocacy group, said Israel’s processing has been disingenuous, noting that of the 15,000 African refugee status requests, only 11 have been approved.

She said the 4,000 migrants who accepted previous offers to go to Rwanda did not find refuge there. Nearly all had their travel papers seized and money taken and were then pushed into neighboring Uganda to embark upon a second refugee ordeal.

Unable to return home, they have been forced to traverse though Africa, where many reported being tortured, raped and starved in Libya en route to Europe. An Eritrean Christian who had left Israel was beheaded on a Libyan beach by the Islamic State group in 2015.

“How can Israel know if these people are genuine refugees if they didn’t check their asylum requests?” said Rozen. “As Jews, we are morally obliged to protect these people from the horrible things that they ran away from.”

At a parliamentary hearing Monday, Deputy Foreign Minister Tzipi Hotovely said Israel had no obligation toward what she called job seekers who imposed “unacceptable migrant terror that includes violence and sexual harassment” toward the people of south Tel Aviv.

Monim Haroon said it hurt to hear Israel refer to him as an infiltrator. Now a 28-year-old university student in Jerusalem, he fled Darfur five years ago and has lost family members in the genocide. 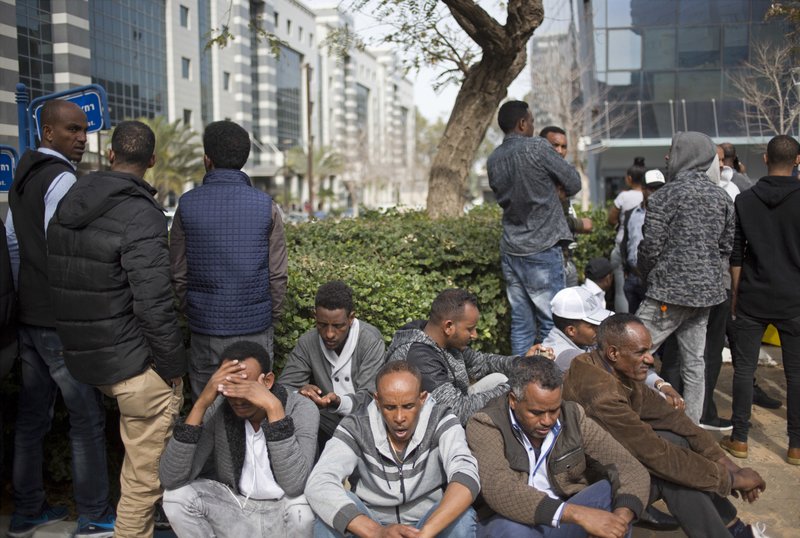 African migrants at their protest in front of the Rwanda embassy in Herzeliya, Israel. (AP Photo/Ariel Schalit)

“I escaped my country because I wanted to stay alive and to say that I am just a migrant worker, that is very painful to me,” he said at a demonstration outside the Rwandan Embassy in Tel Aviv.

Lior Birger, a researcher who published a recent study of 19 migrants who voluntarily left Israel and managed to reach Europe, said Israel’s promises were not being kept. One Eritrean testified to being extorted in a Sudanese prison and then beaten in a Libyan torture camp and shoved into a small room with 800 people. Another said he watched his wife drown in the Mediterranean and later tried to kill himself. She said everyone had a uniform message: “Better a prison in Israel than dying on the way.”

A recent poll by the respected Israel Democracy Institute found two-thirds of the Jewish public agreed with the planned expulsions. The migrants’ best hope may be the government’s lack of preparation. Prison authorities are skeptical they will be able to process the expected 15,000 to 20,000 to be jailed.

For many of the Africans, there is no good choice.

“I don’t care about the money and I never even planned to reach Israel. I was just looking for a safe area,” said Halofom Sultan, 37, who escaped Eritrea seven years ago and has been separated from his wife and two children since. “I hope there will be a change in my country and I can go back. Otherwise, I don’t know.”