London, Feb. 18, 2018 (AltAfrika)-The Chinese government’s annual New Year’s Gala, televised to millions of households across the mainland, has drawn global criticism for its offensive caricatures and a story line about Africans’ admiration for China.

The 13-minute segment featured several dozen African actors, a Chinese co-host and a Chinese actor dressed in blackface. Several actors were also dressed as animals, including an actor from Cote d’Ivoire in a monkey costume.

In recent years, a range of companies have faced criticism for insensitive and, at times, overtly racist portrayals of black people in their advertisements.

These ads often portray light skin as normal and dark skin as unclean, or they associate black people with monkeys, both tropes with deep roots in American advertising.

In October, Dove dropped an ad in which a black woman removes her shirt and reveals a white woman underneath.

Earlier this year, Swedish clothing company H&M drew ire for an ad with a black child wearing a sweatshirt with “coolest monkey in the jungle” printed on the front.

And a Chinese advertisement for detergent that shows an Asian woman push an African painter inside a washing machine, only to emerge as an Asian actor, suggesting a transformation from dirty and unattractive to clean and desirable, was widely condemned.

The Chinese Spring Festival Gala, broadcast on the state-owned China Central Television network to millions of households across China, is different. The Communist Party of China produces and vets the four-hour broadcast. It’s a chance for the central government to reinforce key messages about domestic and foreign policies.

The controversial skit, set in Kenya, begins with an African-themed dance set to “Waka Waka” (This Time for Africa) by Colombian singer Shakira, a song that prompted controversy in its own right when FIFA picked it as the theme for its 2010 World Cup in South Africa, in lieu of music by an African artist.

In the New Year’s skit, the Chinese-built railway linking Mombasa and Nairobi has just opened, and a railway trainer, played by the gala’s Chinese co-host, compliments a group of African train attendants on their command of Chinese.

The trainer explains that he’s to marry his Chinese fiancée later that day, but a young African woman — another train attendant — ropes him into pretending they’re in love to get out of a blind date set up by her mother, played by Chinese actress Lou Naiming, who appears in blackface as a Kenyan mother trying to find a husband for her young daughter.

When the groom’s older brother arrives, he cracks a joke about African transportation. “When I got off the plane, I rented an African public bike [a giraffe],” his brother said, pointing to an actor dressed as a giraffe.

When the trainer’s Chinese bride arrives, the African attendant is forced to tell her mother that she lied to get out of the blind date.

The skit drew a prompt backlash on social media, with viewers in and out of China expressing astonishment and disgust. Hansi Lo Wang, a correspondent with National Public Radio (NPR), called out the “racial stereotypes.”

Happy Lunar New Year! China’s most-watched TV event kicked it off with blackface & racial stereotypes in a skit about a worker for a Chinese-built railway in Kenya trying to get out of a blind date! #yearofthedog #春晚 https://twitter.com/scmp_news/status/964328490463121409 …

​Viewers in China expressed shame at the portrayals and regret that their country had perpetrated negative stereotypes. 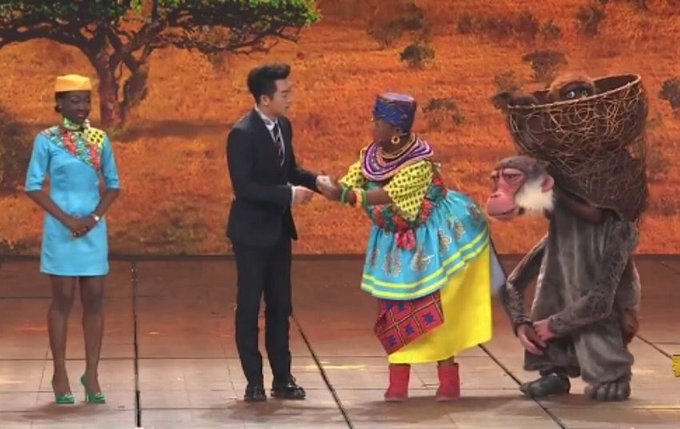 This year’s CCTV Gala, China-Africa ties was portrayed in a comedy show with belt & road themes, inflatable animals, and a Chinese woman in blackface declaring ‘I love China!’

One thing that ruined my Chinese New Year and I feel ashamed for my country thinking that this is okay.

CCTV’s racist show during Spring Gala shook me and made me so ashamed of China and my people. They literally had blackface on stage, had an African actor to play a monkey and a African actress yelling “I love China!” Racism is global y’all…

China Daily, the nation’s largest English-language news organization, put a positive spin on the skit after it aired.

“The sketch, which relies greatly upon the differences in language and cultural norms, is usually one of the most anticipated programs every year. This year, for the first time ever, foreign actors took part in the sketch.”

Beyond its overt caricatures, the skit reflected Chinese ideals of hard work and industriousness. By showing that Africans aspire to the traits Chinese hold in high esteem, the Chinese government reinforced the value of Chinese foreign investment in Africa.

In the skit, the young woman makes clear why she doesn’t want to get married.

“I want to go to China to study. I want to be just like a Chinese person. I’m going to roll up my sleeves, work hard and make the whole world just like me,” she tells her mother, played by Lou.

That line drew applause and cheers from the live audience.

It’s an appealing message for a Chinese audience that might be skeptical about its country’s involvement in the development of other nations at a time when significant challenges remain at home, especially around the country’s ongoing struggle with pollution and air quality.

The skit centers around the Mombasa-Nairobi railway, a $4 billion Chinese-built infrastructure project in Kenya. The Kenyan project is one of many large-scale African infrastructure projects financed and developed by China. It’s one of several railways connecting landlocked African cities to busy ports and promises to facilitate exports back to China.

At the end of the CCTV skit, the mother says that a Chinese doctor once saved her life, and now the Chinese are helping build Africa’s infrastructure and cultivating her daughter into a better person.

“I love Chinese people! I love China,” the mother said.

That message may appeal to the Chinese government, whose focus on building soft power requires positive relationships with countries with much smaller economies and far less global clout.

But for many, including Sophie Richardson, the China director for Human Rights Watch, the New Year’s portrayal missed the mark.

“China’s President Xi Jinping likes to talk about his vision for a new, just world order. It’s hard to see that happening when his own state media broadcasts a vision of racism — and then censors criticism of it,” Richardson said.