Levi Nyagura, the vice chancellor of the University of Zimbabwe, was arrested by the Zimbabwe Anti-Corruption Commission following an investigation into the PhD.

It emerged that Grace was awarded the degree by the university in 2014 after just months of study. 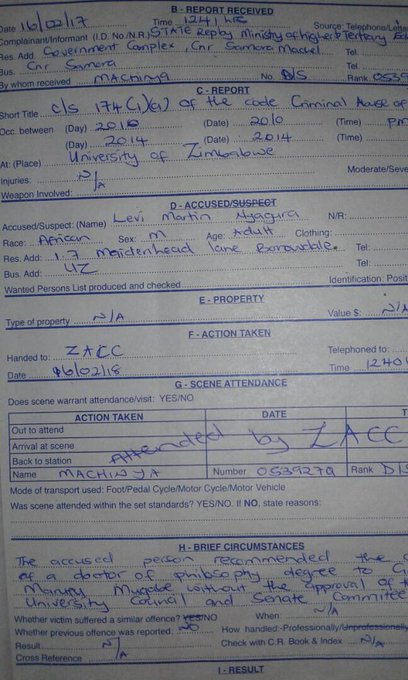 The University of Zimbabwe Vice Chancellor Levi Nyagura has been arrested by the Zimbabwe Anti Corruption Commission for recommending the issuance of a PhD to Grace Mugabe. It turned out to be a fake PhD completed in a record three months.

“Nyagura has been arrested. We cannot have people who award fake degrees,” Goodson Nguni, a ZACC commissioner told AFP over the telephone.

The professor will be charged with abuse of office, he said, refusing to say whether Grace also faces arrest.

A copy of the 226-page doctoral thesis, titled “The Changing Social Structure and Functions of the Family” was only published last month following public calls for Grace to be stripped of her PhD.

Critics had argued that Grace, 52, had not actually studied or undertaken research to earn the doctorate.

She was personally capped by then-president Mugabe, who was also the chancellor of the university.