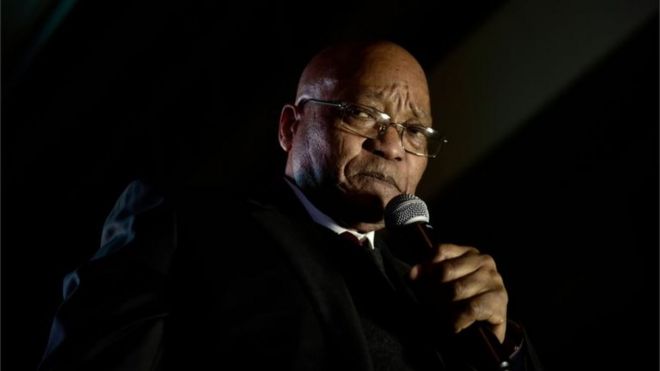 South African President Jacob Zuma’s state of the nation speech in parliament has been postponed, as pressure grows on him to resign.

Parliament speaker Baleka Mbete made the announcement, without giving a new date for the address that had been scheduled for Thursday.

The ruling ANC earlier called a meeting of the party’s top body for Wednesday to decide the president’s future.

Mr Zuma, 75, has resisted calls to quit over corruption allegations.

He was replaced as party leader by his deputy, Cyril Ramaphosa, 65, in December. He is now the front runner to succeed him as president.

Earlier on Tuesday, the Nelson Mandela Foundation urged Mr Zuma to step down.

South Africa had seen “systematic looting” under Mr Zuma’s rule, and he “must go sooner rather than later”, the foundation said in a statement.

How did the parliament speaker explain her decision?

In a statement, Ms Mbete said that “reporting through Parliament on the state of the nation is a critical accountability action by the Executive and it must happen.

“Developments this year, particularly the calls for disruption and/or postponement of the Joint Sitting, have, therefore, caused us great concern.

“We have, regrettably, come to the conclusion that there is little likelihood of an uneventful Joint Sitting of parliament this coming Thursday.

“With this in mind, we decided to approach the president of the republic to propose that we postpone the Joint Sitting in order to create room for establishing a much more conducive political atmosphere in parliament.

“When we met the President, we then learnt that he was already writing to parliament to ask for the postponement” of his speech, the statement added.

South Africa’s main opposition parties, the Democratic Alliance (DA) and the Economic Freedom Fighters (EFF), had been pushing for the postponement of Mr Zuma’s speech.

They both welcomed the postponement.

What is the ANC position on the issue?

On Monday, senior ANC officials held an emergency meeting in the main city, Johannesburg, to discuss his future.

A “dominant view” emerged from the meeting, but it “wasn’t the only view”, ANC deputy secretary-general Jessie Duarte said at a media briefing.

She refused to go into details, saying the party’s National Executive Committee (NEC) will make a final decision on Mr Zuma’s future on Wednesday.

If the committee agrees to recall Mr Zuma, the BBC’s Andrew Harding says, it would be very hard for him to resist.

Mr Zuma, who spent time in prison for his part in the fight against apartheid, met the ANC’s top six on Sunday. They are said to have failed to convince him to stand aside.

Other unconfirmed reports from Sunday’s meeting say that Mr Zuma asked for protection from prosecution for himself and his family.

Why is there a push to remove him?

Mr Zuma’s presidency has been overshadowed by allegations of corruption.

In recent years his links to the wealthy India-born Gupta family, who are alleged to have influenced the government through their relationship with Mr Zuma, have caused his popularity to plummet. In South Africa, it has become known as “state capture”.

Both Mr Zuma and the Guptas deny the allegations.

Then there is also the country’s struggling economy, with the unemployment rate rising to about 28%.

As a result, many in the ANC fear his presidency has become toxic – and is hurting the party’s standing.

That appeared to be borne out at the 2016 local elections, when the ANC lost ground to the opposition Democratic Alliance (DA) and Economic Freedom Fighters (EFF).

With a general election set for 2019, the ANC will be keen to distance itself from any more negative press – and therefore it is perhaps not surprising that Mr Ramaphosa was elected the party leader on an anti-corruption platform.

However, Mr Zuma still has his supporters within the ANC – including at least two of the top six – so nothing is definite.

On Monday, there were scuffles out the ANC headquarters between small groups of pro- and anti-Zuma supporters.