Plans by the Kenyan government to expand coverage of sex education in primary schools have been criticised for encouraging promiscuity among young people.

The ministry of education wants guidance on sex, which is currently incorporated into subjects such as civil education, to become a distinct topic in the country’s new curriculum.

But campaign group CitizenGo has petitioned the ministry, urging it not to implement what it describes as a “dangerous proposal”.

Ann Kioko, campaigns manager for CitizenGo, said: “It is teaching children from a very young age that they are sexual and they can experiment with homosexuality, and that abortion is their right.”

Kioko added that the organisation is not opposed to sex education based on the principle of informing children about the changes their bodies undergo as they get older.

David Oginde, presiding bishop of Christ is the Answer Ministries, one of Kenya’s largest and most influential Pentecostal churches, wrote in a comment piece for a Kenyan newspaper: “Many parents and family organisations are in full support of wholesome sex education. Instead, concern is that, unlike traditional sex education, CSE [comprehensive sexuality education] is highly explicit. With an almost obsessive focus on children obtaining sexual pleasure, CSE promotes promiscuity and high-risk sexual behaviours as healthy and normal.”

But Kennedy Buhere, a spokesperson from the ministry of education, said sex education was already firmly embedded in the existing primary school curriculum.

“It is not a standalone subject, and they [teachers] do not pour everything on the children,” said Buhere. “The knowledge is calibrated to fit the age of the children.”

He added that content about sexuality in the new curriculum had taken into consideration the religious and cultural values of the country as well as the age of the children targeted.

According to the 2014 Kenya demographic and health survey, 18% of teenagers in Kenya were already mothers or were pregnant.

A 2017 survey by the African Population and Health Research Centre showed that while 75% of schools in Kenya cover all sex education topics under the existing curriculum, only 2% of students said they felt they had learned about all of the topics. The centre found that classes focused more on anatomy and HIV prevention.

Data from the country’s National Aids Control Council found that 43% of the 61,000 new HIV infections recorded in 2016 were among young people aged between 10 and 19. 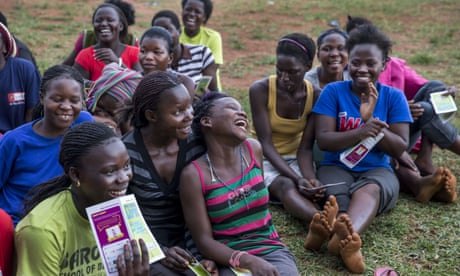 Patrick Oyaro, a doctor and former director of Family Aids Care and Education, a health ministry organisation that offered medical and counselling services to HIV patients in Kenya, said education was critical for schoolgirls.

“If the information is packaged well … it can help protect them, and make choices,” said Oyaro.

Mary Akelo, 17, from Nairobi, had to leave school and give up her dreams of becoming a nurse when she became pregnant.

“I leave my child at the day care to look for casual jobs every day, and sometimes I do not even have the 50 shillings [34p] to pay the caregiver,” she said.

Depression and its links to conflict and ...