Cameroon Jails Separatists After They Were Extradited from Nigeria

Cameroon, Jan. 31, 2018 (AltAfrika)–Cameroon has jailed 47 secessionists including Ayuk Tabe Julius, head of a group from Cameroon’s Anglophone region pushing for a breakaway from French-speaking country

Cameroon government spokesperson Issa Tchiroma Bakari says Ayuk Tabe Julius and his nine cabinet members were arrested in Nigeria on January 5. They were brought to Yaounde and handed over to the government of Cameroon Monday.

He says the collaboration of the governments of Cameroon and Nigeria worked together to arrest the armed separatists.

Since Ayuk Tabe and his group were arrested, they have never been seen in public either in Cameroon or in Nigeria. Armed separatists said on social media that they had been detained in a police cell in Abuja and were refused access to their lawyers. 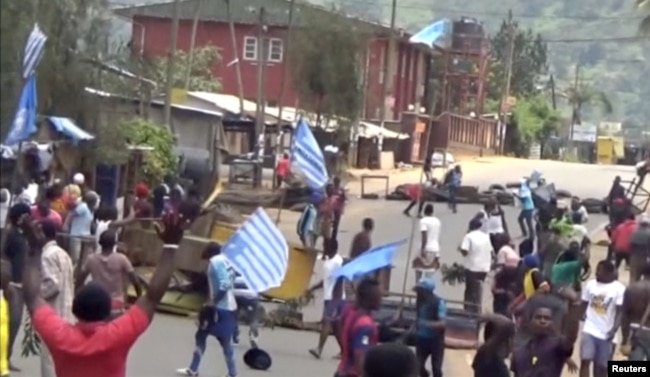 A still image taken from a video shot on Oct. 1, 2017, shows protesters waving Ambazonian flags in front of road block in the English-speaking city of Bamenda, Cameroon.

In December 2017, Nigerian local newspapers reported that a group of 37 English-speaking Cameroonians had been arrested near Gembu in Taraba state while they were receiving military training to return and fight for the independence of a state they call Ambazonia.

After their arrests, simultaneous attacks were reported in two English-speaking regions with the government reporting that at least 18 policemen and soldiers had been killed. Several dozens of the attackers also died and at least six villages were burned.

Last week, the United Nations High Commissioner for Refugees announced that tens of thousands of Cameroonians had fled across the border to Nigeria as a result of the violence.

Fonki Samuel, moderator of the Presbyterian Church in Cameroon, says the arrests of the suspected separatists may lead to further violence and killing.

“What is the option and the way out is the proper, well-staged and organized dialogue. You can not have unity and peace without justice.”

Cameroon has not said where those arrested persons will be tried. Its 2014 anti-terrorism law says that any one who uses weapons against the government will face a military tribunal. If convicted on such charges, they could face the death sentence.

The unrest in Cameroon began in November, when English-speaking teachers and lawyers in the northwest and southwest regions, frustrated with having to work in French, took to the streets calling for reforms and greater autonomy.

Governance in Nigeria a criminalised enterprise – ...