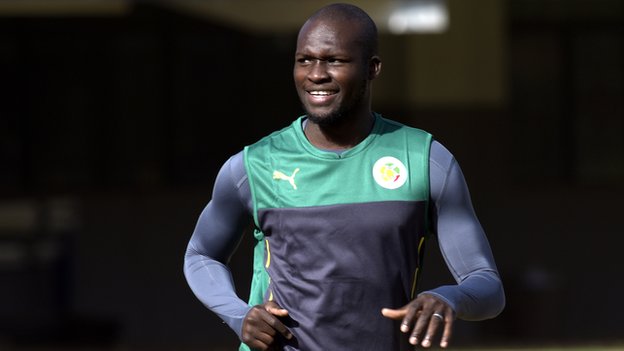 The striker, 31, previously played in Turkey for Fenerbahce, winning the 2014 title and two FA cups in two spells.

Sow has not been a regular under coach Aliou Cisse and faces competition for a squad place in Russia from several exciting youngsters.

His return to Turkey is widely seen as a bid to boost his World Cup chances.

The veteran striker also wants to make a big impact at ninth-placed Bursaspor, who are managed by former Cameroon boss Paul Le Guen.

“I came here to add value, plus help the club go as far as possible in the league and qualify for a European competition next season,” said Sow.

“I know there are expectations but I do not have a scoring target, I just hope to find the back of the net regularly.

“What is more important is to help get the team to the highest level possible.”

Born in France, Sow began his professional career at Rennes before switching to rivals Lille in 2010.

He emerged top scorer with 25 league goals, including a hat-trick on the final day against former club Rennes in May 2011, to help Lille clinch their first French league title since 1954.

Turkish giants Fenerbahce snapped him up on a four-and-a-half-year deal for US$13.2m in January 2012.

After three successful seasons in Turkey, he joined UAE club Shabab Al-Ahli in 2015 and scored 13 goals as the club won the Pro-League title in 2016.

Later that year, Shabab Al-Ahli loaned Sow back to Fenerbahce for a season-long loan deal.

Capped by France at youth levels, he made his senior international debut for Senegal in a friendly against DR Congo in August 2009.

He has won 45 caps and scored 15 goals for the Teranga Lions.