The mother of a child model caught up in an H&M racism row says her family has had to move house.

The mother of the five-year-old H&M model caught up in a racism row has told the BBC her family has moved house in Sweden “for security reasons.”

Many were angered when Liam’s mother Terry Mango defended the brand and told people to stop “crying wolf.”

In South Africa, protesters vandalised H&M stores over the photos.

Despite the backlash she has faced, Terry Mango still doesn’t believe H&M had a racist agenda.

“I respect other people’s opinion on the issue. I know racism exists, but does the shirt to me speak racism? No it doesn’t,” she told BBC Outside Source.

Though Mrs Mango has been a victim of racism and acknowledges it’s a huge problem, she’s been attacked by other black people for not condemning H&M.

“I [am] a sell out to them, I [am] an embarrassment to the black and African-American people. I sold my son for money,” she told BBC Outside Source.

The family have moved out of their house in Stockholm following “security concerns” Mrs Mango added.

Though she did not elaborate on the safety reasons, Mrs Mango said the attacks on H&M stores in and around Johannesburg were one reason for the move.

The protests, which took place on Saturday, were organised by the radical Economic Freedom Fighters’ party (EFF). 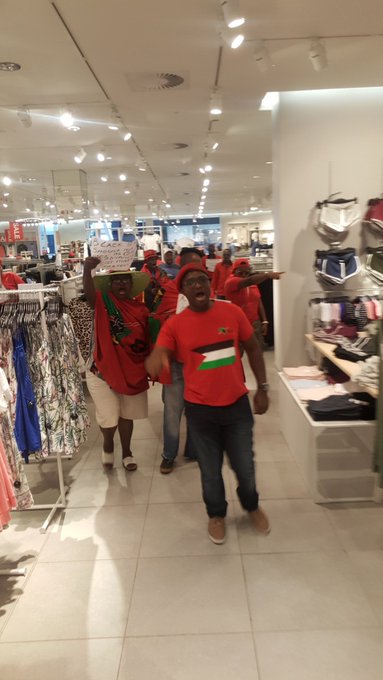 Theirs was not the only protest.

Amid calls for a global boycott of H&M, musicians The Weeknd and G-Eazy have cut ties with the company, with the former saying the advert made him feel “shocked and embarrassed”.

“He has no idea what’s going on, he’s only five… Liam has not experienced [racism yet],” Mrs Mango said. “I just want him to have innocence