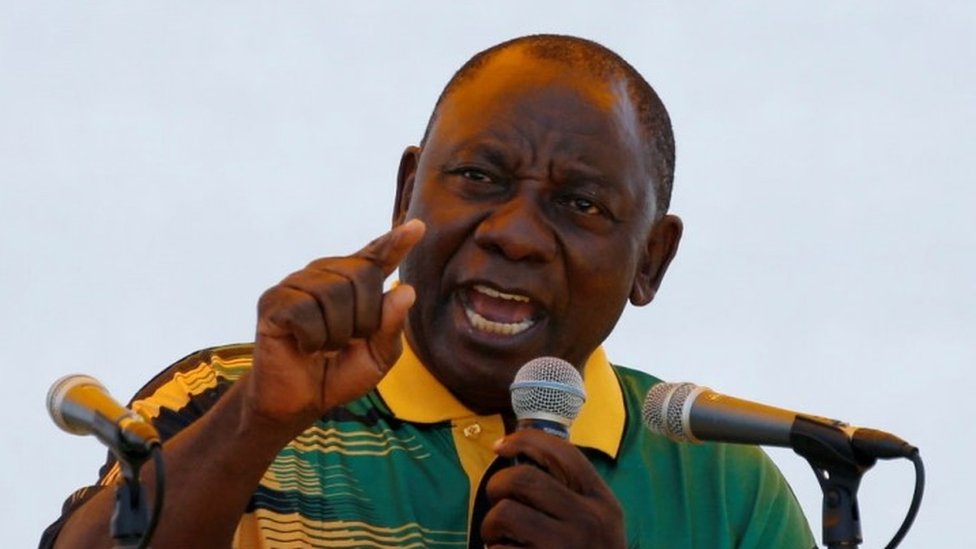 Cyril Ramaphosa, the new leader of South Africa’s ruling ANC, has said the party must address the “dysfunction” in its ranks and unite at all levels.

Mr Ramaphosa told a large rally in the south-eastern city East London that the party had become deeply divided through factionalism, patronage and corruption.

He was elected to replace President Jacob Zuma as party head last month.

But Mr Ramaphosa did not address calls to immediately replace the president, who was booed as he took his seat.

Mr Zuma’s term in office is not scheduled to end until elections in 2019.

However, the ANC has seen public support decline during his second term, amid a weakening economy and allegations of corruption.

Mr Ramaphosa was addressing a rally to mark 106 years of the ANC.

The BBC’s Andrew Harding says the new ANC leader did not criticise Mr Zuma by name but the implication was clear when he condemned corrupt families and individuals.

The suspicion remains, our correspondent says, that Cyril Ramaphosa and his allies in the ANC may soon move against South Africa’s embattled leader.

President Zuma has been embroiled in a series of corruption scandals – he denies any wrongdoing.

The leadership battle caused fierce political infighting, raising fears of a party split before the 2019 election.

In his speech Mr Ramaphosa vowed to “confront people who are trying to divide the ANC”, calling for unity, renewal and a change of culture.

He urged “the creation of a united, non-racial, non-sexist, democratic, prosperous and equitable society”.

Much of the speech was targeted at corruption and the economy.

He said he wanted people in the ANC who sought “no advantage for themselves or their families”, adding: “We are going to confront corruption in all its forms. Investigation of those responsibility will be given top priority.”

He issued a plea for foreign investment and vowed to build “an economy which benefits the people of our country as a whole rather than just benefit a few privileged individuals and families”.

Mr Ramaphosa vowed to pursue the “expropriation of land without compensation” as agreed at the party conference.

But he cautioned it would be done in a manner that “does not impede economic development and agricultural production”.

The ANC has been under pressure to redress disparities which mean white farmers still own much of the best land in South Africa, more than two decades after the end of apartheid.