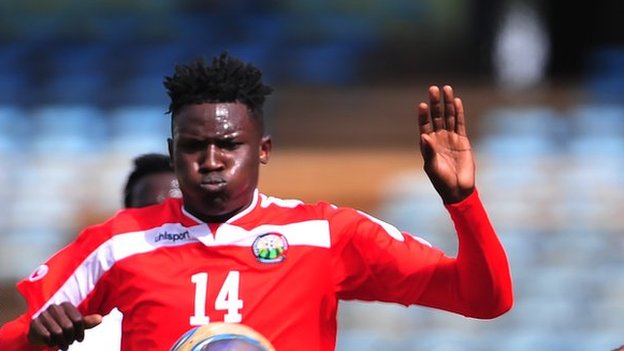 Girona forward Michael Olunga made history on Saturday, becoming the first Kenyan to score a hat-trick in Spain’s La Liga as they beat Las Palmas 6-0.

Olunga came off the bench to score in the 57th, 70th and 79th minutes as he became the first player to record a top-flight treble for Girona in their debut season in La Liga.

It was also the Catalan side’s biggest home win at any level.

Olunga, 23, is on loan at Girona from Chinese club Guizhou Hengfeng.

Girona were ahead at half-time through a Cristhian Stuani penalty when Olunga – who has been used sparingly since joining at the start of the season – was sent on for the second half in place of the Uruguayan.

The Kenya international turned in a Johan Mojica cross to double Girona’s lead, and he was then involved in the build-up to Borja Garcia’s goal.

Defensive errors from Las Palmas allowed Olunga to make it 4-0 before he set up Cristian Portu for the fifth goal.

Olunga was then left with an easy finish to complete his hat-trick 11 minutes from the end.