News Now
Home›News Now›Will Cape Town be the first city to run out of water?

Will Cape Town be the first city to run out of water?

With water usage and droughts across the globe rising, the race is on to manage water more efficiently. 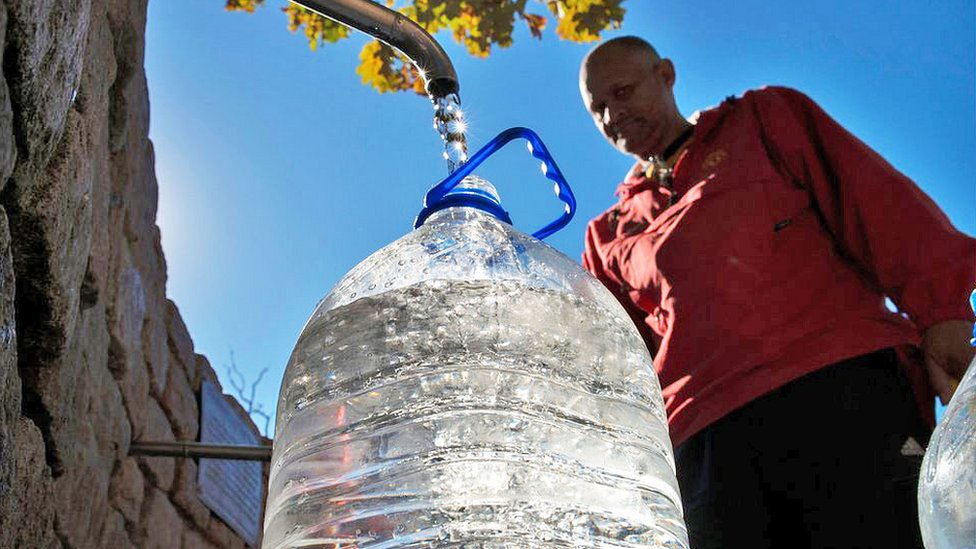 Cape Town, home to Table Mountain, African penguins, sunshine and sea, is a world-renowned tourist destination. But it could also become famous for being the first major city in the world to run out of water.

Most recent projections suggest that its water could run out as early as March. The crisis has been caused by three years of very low rainfall, coupled with increasing consumption by a growing population.

Meanwhile Cape Town’s four million residents are being urged to conserve water and use no more than 87 litres (19 gallons) a day. Car washing and filling up swimming pools has been banned. And the visiting Indian cricket team were told to limit their post-match showers to two minutes.

Such water-related problems are not confined to Cape Town, of course.

So it seems incredible that we still waste so much of this essential natural resource. In developing and emerging countries, up to 80% of water is lost through leakages, according to German environmental consultancy GIZ. Even in some areas of the US, up to 50% of water trickles away due to ageing infrastructure.

A growing number of technology companies are focusing their work on water management – applying “smart” solutions to water challenges.

For example, French company CityTaps is on a mission to streamline water access in urban homes with its smart water meters linked to an internet-based management system.

The company is first targeting poor homes in urban areas and its system, CTSuite, is currently being trialled in Niger.

Users buy “water credits” via their mobile phones and a smart meter dispenses only as much water as has been paid for. Users receive alerts when their credit balance gets low, and if they don’t top up the account, the meter automatically switches off the flow.

The utility can track water usage remotely in near real-time via the internet. A sudden spike in water outflow and a change in pressure, measured by “internet of things” sensors, can then help identify leaks across the network.

Water companies are also using drones and satellites to help spot leaks, and in some circumstances even divining rods – despite scientific doubts, some firms say they do work.

“The internet of things offers new avenues for technological innovation in the water field, mostly by providing real-time data that – we hope – can be used to help utilities become ever more efficient and high-performing,” says Gregoire Landel, chief executive of CityTaps.

Better water management also helps save on the electricity and chemicals required to produce drinkable water.

Meanwhile, other companies are using technology to harvest water from new sources.

US-based WaterSeer, for example, is developing a device capable of collecting water from the air.

An internal fan draws air into an underground collection chamber where the vapour condenses, making use of the earth’s cooler temperatures. Solar or electricity grid-powered coolers also help the condensation process.

The company says water can be produced with “less than a 100 watts” of electricity – the power requirement of an old-fashioned light bulb.

“Individuals and businesses will pave the way for innovative solutions, as they will be able to move and adopt a series of them quicker than large utilities that are sometimes mired in regulatory constraints and rigid decision-making cultures,” says Nancy Curtis, a founding partner of WaterSeer.

A number of water-restricted municipalities in the US are exploring how WaterSeer devices could be used to improve water security, the company says. But the device is still being tested in the field, so these are early days.

“A community of 500 would save 40 million US gallons (150m litres; 33m gallons) of water or more each year, reducing stress on traditional surface and underground sources,” argues Ms Curtis.

Technology may have its place in helping us use water more efficiently, but it is unlikely to have much impact on those without any access to water in the first place, says Alexandros Makarigakis of Unesco’s international hydrological programme (IHP).

“Smart water systems cannot be expected to have much impact regarding provision of access for the unconnected. [They] are more effective in the urban context,” he says.

This is echoed by Vincent Casey, senior manager at the charity WaterAid.

“The technology to connect people to a water supply has been around since ancient Egypt. It’s not a technical problem,” he says.

More important is how water supplies are organised, he argues, which is an issue primarily for governments, with support from the private sector.

“The priority is mobilising resources and paying sufficient attention to the management arrangement to keep people connected,” says Mr Casey.

For those with no direct-to-home supply, services like Grundfos’ “water ATM”, which enables people to access water from a local dispenser using a pre-paid card, are also proving useful.

But there is a sense that much of this technology is merely tinkering at the edges. The overarching issue is the potentially devastating effect of global warming on water availability and how we, collectively, endeavour to tackle it.