More than 30 people are sentenced to long terms for belonging to a group wanting to overthrow the government. 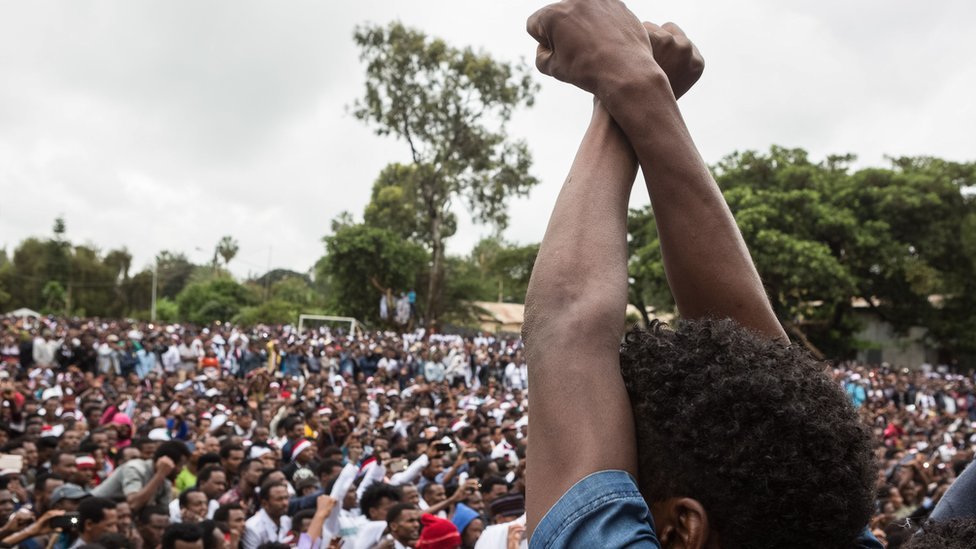 A court in Ethiopia has sentenced more than 30 people to long prison terms for belonging to an outlawed group.

All the accused belong to Ginbot 7, a group committed to overthrowing the government.

The Ethiopian government designated it a terrorist group in 2011.

The move comes just two weeks after the government announced it would free some politicians who have been convicted or who are facing various charges in court.

Members of the Ginbot 7 group, founded by an Ethiopian-born British citizen, Andargachew Tsege, will now serve sentences of between 15 and 18 years.

Dozens more have been jailed by the courts over the past weeks due to their association with the group.

Meanwhile, a leading opposition figure and his co-accused have been sentenced to six months in prison for contempt of court.

Bekele Gerba, an official of the Oromo Federalist Congress, was jailed after he protested against the non-appearance of defence witnesses in the court trying his case.

The judge was angered after he reportedly sang a protest song in court.

He is among politicians who would have charges against him dropped following the announcement by Prime Minister Hailemariam Desalegn, many Ethiopians believe.

Up until now, the government has not followed up on its promise or issued a clear timeline on when those politicians jailed would be set free, reports BBC Ethiopia correspondent Emmanuel Igunza in the capital, Addis Ababa.

Ethiopia has always denied that there were any political prisoners in the country, as alleged by human rights and opposition groups.

The country has been hit by a wave of political unrest in recent years.

In December, social media users staged a day of action to remember those held behind bars.

President Buhari’s son to be ‘discharged from ...