The African Union, representing 55 member states, is furious over a reported slur by the US leader. 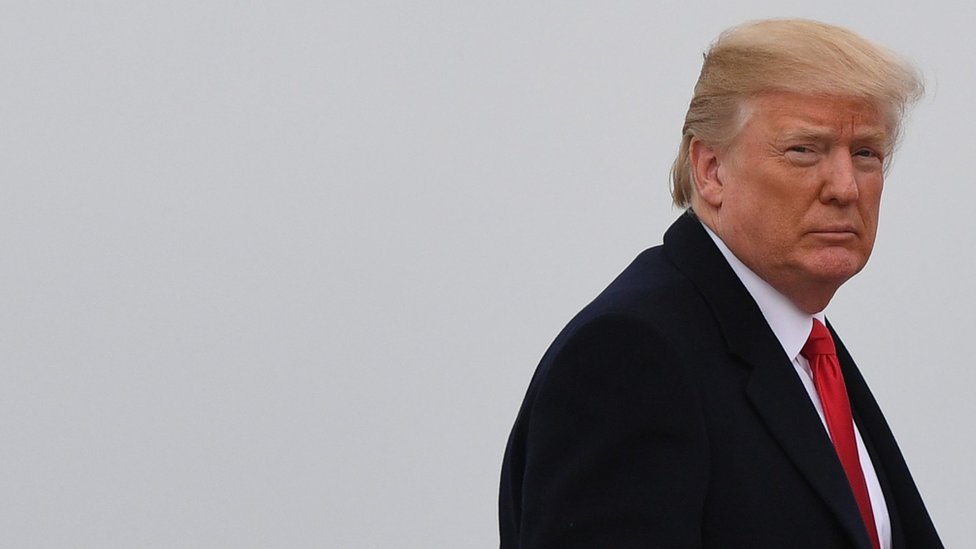 The organisation representing African countries has demanded that US President Donald Trump apologise after he reportedly called nations on the continent “shitholes”.

The African Union mission in Washington DC expressed its “shock, dismay and outrage” and said the Trump administration misunderstood Africans.

The US leader made the alleged remark in a Thursday meeting on immigration.

But Mr Trump has denied using the language reported.

He has been backed by two Republicans who were at the White House meeting, but Democratic Senator Dick Durbin said Mr Trump called African countries “shitholes” several times and used “racist” language.

On Friday, Mr Trump on Friday tweeted that his language he used at the private meeting with lawmakers to discuss immigration legislation had been “tough”.

But he added that the words attributed to him were “not the language used”.

What did the African Union say?

It said the “remarks dishonour the celebrated American creed and respect for diversity and human dignity”.

It added: “While expressing our shock, dismay and outrage, the African Union strongly believes that there is a huge misunderstanding of the African continent and its people by the current Administration.

“There is a serious need for dialogue between the US Administration and the African countries.”

The pan-African grouping represents 55 member states throughout the continent. It succeeded the Organisation of African Unity – which originated in the decolonisation struggles of the early 1960s – in 2002.

What exactly did Trump say?

The remarks were allegedly made when lawmakers visited him on Thursday to discuss a bipartisan proposal that would impose new restrictions on immigration but protect the so-called “Dreamers” – hundreds of thousands of immigrants brought to the US illegally as children – from deportation.

Mr Trump was said to have told them that instead of granting temporary residency to citizens of countries hit by natural disasters, war or epidemics, the US should instead be taking in migrants from countries like Norway.

“Why are we having all these people from shithole countries come here?” the Washington Post quoted him as saying.

Mr Durbin said that when Mr Trump was told that the largest groups of immigrants with Temporary Protected Status (TPS) were from El Salvador, Honduras and Haiti, the president responded: “Haitians? Do we need more Haitians?”

But in another tweet on Friday the president denied that he insulted Haitians.

Never said anything derogatory about Haitians other than Haiti is, obviously, a very poor and troubled country. Never said “take them out.” Made up by Dems. I have a wonderful relationship with Haitians. Probably should record future meetings – unfortunately, no trust!

Many US media outlets reported the comments on Thursday, quoting witnesses or people briefed on the meeting. The White House did not deny them.

What has been the political fallout?

Hang in there Mr. President @realDonaldTrump. If those countries aren’t as you described, Democrats should be happy to deport criminal aliens back to them. &End #AnchorBabies, too.

The anniversary of the devastating earthquake 8 years ago is a day to remember the tragedy, honor the resilient people of Haiti, & affirm America’s commitment to helping our neighbors. Instead, we‘re subjected to Trump’s ignorant, racist views of anyone who doesn’t look like him.

Another Republican Senator who was there, Lindsey Graham, did not deny the comments were made. “Following comments by the president, I said my piece directly to him yesterday. The president and all those attending the meeting know what I said and how I feel,” he said.

On Friday, Mr Trump ignored press questions about the issue as he signed a proclamation declaring a holiday in honour of civil rights hero Martin Luther King Jr – as presidents do every year.

He said Americans were celebrating that “self-evident truth” that “no matter what the colour of our skin or the place of our birth, we are all created equal by God”.

What has been the global reaction?

‘Britain is not always preferable to Nigeria’