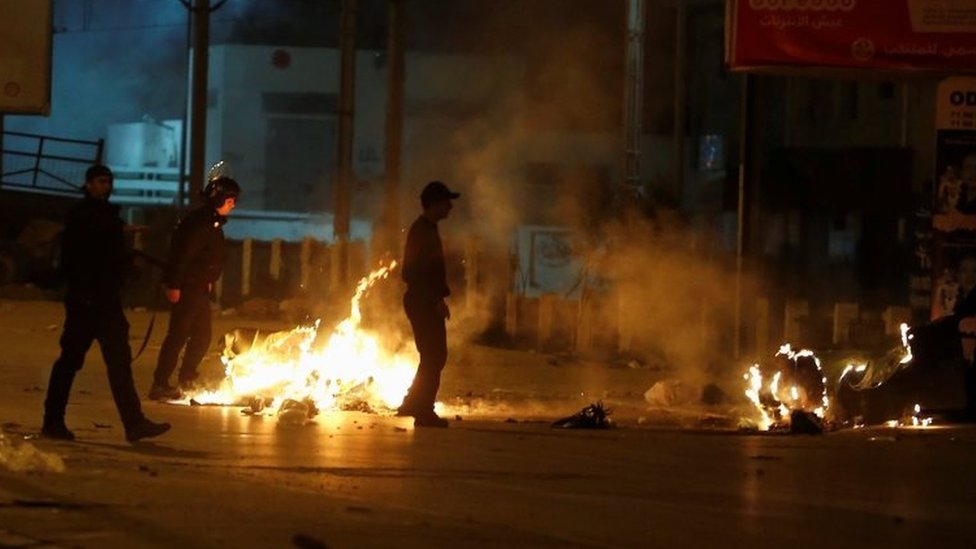 More than 300 people have been arrested in Tunisia overnight, as anger over the government’s austerity measures spilled into the streets once more.

The army was deployed into towns across the country to protect government buildings, which have become targets.

PM Youssef Chahed condemned acts of “vandalism” by the protesters, saying they were trying to weaken the state.

What is the extent of the protests?

Protests have taken place in at least 10 different areas, including the capital, Tunis, in the last few days.

The protests began peacefully last week, but escalated on Monday evening. Wednesday was the third successive night of violence, with almost 600 people arrested in total since the start of the week.

The government has accused demonstrators of torching police cars and attacking officials. Some people attempted to take over shopping malls and stores, while others blocked roads.

The army was also forced to enter the town of Thala, near the Algerian border, overnight on Wednesday after police were forced to retreat after protesters burnt down the national security offices, news agency Reuters reports.

The defence ministry said the army was now protecting banks, post offices and other government buildings in Tunisia’s main cities.

Not all protests are violent, however. Local news agency Tass reported the Tunisian students’ union organised a sit-in at the theatre in Tunis, the country’s capital, before marching towards the offices of the interior ministry.

Demonstrators have also accused police of a violent crackdown.

“The protests are over the cost of living,” one protester in Tunis told the BBC. “Prices of medicine have increased. Everything has, and salaries have not. I don’t think this is the right time for price hikes.”

Big rallies are planned for Friday.

Why are they protesting?

The demonstrators are demanding the government drop the 2018 budget, which opposition groups describe as unfair. They also want to see more welfare payments for struggling families.

The protests come after the government announced an increase in value-added tax and social contributions in the budget.

The new financial year has also brought with it price hikes on some goods and increased taxes on imports.

What is the economic situation in Tunisia?

Tunisia’s economy has been struggling since the 2011 revolution, when Zine El Abidine Ben Ali was forced to flee after more than 20 years in power.

The revolution was sparked by the country’s high unemployment rates and worries about corruption.

Seven years on, and nine governments later, some of those same problems remain – not helped by a number of terrorist attacks which have damaged Tunisia’s tourism industry and foreign investment opportunities.

In December 2017, the International Monetary Fund told Tunisia it needed to take “urgent action” and “decisive measures” to reduce its deficit.

Mr Chahed has said Tunisians can look forward to better times ahead.

“People have to understand that the situation is extraordinary and their country is having difficulties, but we believe that 2018 will be the last difficult year for the Tunisians,” he said on Tuesday.