How Nigerian singers won the hearts of Romanians 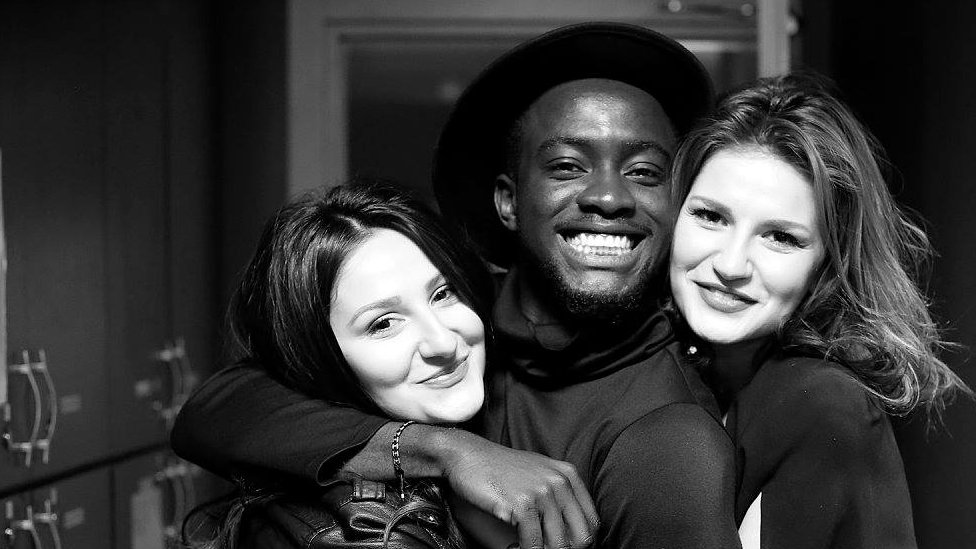 Before Tobi Ibitoye arrived in Romania from Nigeria as a 15-year-old, it had never occurred to him he – and his skin colour – might stand out in some way.

A few days in Bucharest were all it took to make him realise just how wrong he was.

“It can be very unnerving to have people stare at you like some spectacle,” Ibitoye told the BBC.

All eyes on me

“I had never heard of Romania prior, but read about the country when we got news of my dad’s posting”.

Eight years later, things could not be more different: backed by scores of Romanian fans, the musician has just signed his first record deal.

Now the stares are from people trying to work out if he really is the Tobi Ibitoye who shot to fame, coming third on The Voice of Romania talent show in 2015.

Nothing had prepared Ibitoye for what he encountered when he arrived in 2009. His father had just got a job with the Nigerian embassy, and the entire family relocated.

But Romania only has a very small African community, as most of those leaving the continent tend to head to Western European countries – generally to those with a colonial link.

It is estimated that over 90% of Nigerians living in Romania are university students, many of whom have come to study medicine, computer engineering or maritime engineering.

So, an older generation of Romanians is not used to the concept of diversity, according to Ana Craciun, of Equality Community Development Association, a campaign group based in the second-largest city, Iasi.

“They are attached to the strong Romanian traditions and want things to be as they were,” she said.

At first, Ibitoye had to get used to being visibly different.

“If you walk the streets of Iasi or any other small city in Romania as a black person, you are bound to get a stare. It ranges from curiosity to astonishment, depending on how you react,” he said.

But the generation who grew up after the Communist Party was toppled in 1989 lives in an internet age and as part of the European Union, so attitudes are becoming more tolerant, analysts say.

Ibitoye’s success is not an isolated case, as another Nigerian went a step further last month by coming second place at the Voice of Romania.

Meriam Jane Nduibusi went to Romania from Italy, where she lives, with the sole purpose of getting on the show.

She shared her experience in what she described as an incredible journey.

“People cross the road to meet me, they would hug me and tell me they love me,” she told the BBC.

Although she did not win, Nduibusi said she received a lot of love from the Romanian public, with people walking across to her in public and saying: “We want you to win.”

In fact, mixed-race singer Julie Mayaya was named Voice of Romania in 2012, becoming the first female winner and the first non-white person to win a talent show in the country.

Mayaya, who is partly of Congolese descent, then found more success when she got a part in a Romanian TV show, which at the time was unprecedented.

But does Ibitoye think people were voting for him precisely because he was different – the “token black guy” syndrome – or because of his talent?

“I would say a bit of both; it’s interwoven and not mutually exclusive.

“I was just riding the wave of support because it was overwhelming and the more I progressed, the more I realised that what I actually deemed as a hobby was actually a talent and I think they saw that too.”

Cosmin Vieriu, a Romanian who lives in Bucharest and works for the UN’s cultural organisation Unesco, says attitudes are changing, but not so much in rural communities.

“It’s not racism, but people don’t have much contact with the outsiders. They’re like families in these communities, so they’re closed.”

But not everyone agrees that Romania is opening up, or becoming more diverse as the stories of thriving Nigerians seem to suggest.

“The biggest diversity is represented only by Hungarians and Roma communities. Anything else is really low,” says Andreaa Tudorache of Attitude Reality Transformation, a Bucharest-based group.

She says the experiences of a few Nigerians does not necessarily reflect Romanian society at large.

But if Ibitoye is to be believed, it might not be too long before you find Jollof rice and pounded yam on sale alongside the more traditional tripe soup and cabbage rolls on the streets of Bucharest.