Dozens killed in bus and lorry road crash in Kenya

At least 36 people have died in a head-on collision between a lorry and a Nairobi-bound bus on a notoriously dangerous road near Migaa in Kenya.

Local officials said the accident happened at 03:00 (0:00 GMT), and the bus was speeding and in the wrong lane.

The World Health Organisation (WHO) has ranked Kenya as one of the world’s worst countries for road safety.

Police believe over 100 people have died in the same area on the Nakuru-Eldoret highway in recent weeks.

The bus was reportedly carrying 46 passengers to Nairobi from the western town of Busia when the accident happened.

“I was asleep when the accident occurred and all I heard was a loud bang and screams from all over before I was helped out,” a passenger who survived the crash told a local radio station.

Both vehicles’ drivers are said to be among the dead, with the youngest victim reportedly a three-year-old child.

The Kenyan Red Cross said on Twitter that 18 passengers from the bus were taken to hospital with serious injuries.

Police say the accident on Sunday is the worst on the highway in the month of December.

Earlier this month Kenyan officials announced the road was going to be renovated into a dual carriageway in 2018, in order to try and minimise accidents on the deadly stretch. 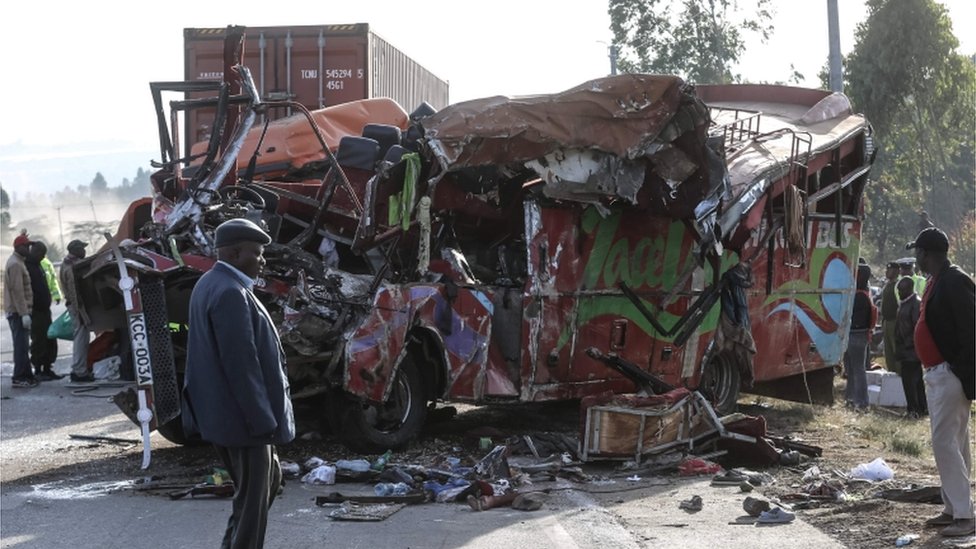