Former Chelsea, Manchester City and AC Milan striker George Weah will be the next president of Liberia.

Weah, 51, became the first non-European player to win the Ballon d’Or in 1995 – just one of many achievements over a prolific 18-year professional career that ended in 2003.

He entered politics after his retirement and had been serving as a senator in Liberia’s parliament.

His victory was announced by Liberia’s National Elections Commission on Thursday – it said that with 98.1% of ballots counted, Weah had won 61.5% of the vote.

He will succeed Ellen Johnson Sirleaf, Africa’s first elected female president. She defeated Weah in elections in 2005, held shortly after the end of a brutal civil war.

How good was Weah the player?

For a few years in the 1990s, Weah was among the best strikers in world football.

Capable of scoring all sorts of goals, his most famous moment came while playing for AC Milan in 1996 when he scored a solo effort against Verona which started in his own penalty area and saw him dribble past almost an entire team.

First brought to Europe by Arsene Wenger at Monaco in 1988, Weah scored 47 league goals for the club in four years before a move to Paris St-Germain. There he won the league title in 1994 and was the top scorer in the Champions League a year later – finishing ahead of Jari Litmanen, Romario and Hristo Stoichkov – before moving to Milan in 1995.

Playing alongside Roberto Baggio, Weah won Serie A in his first season with the club and won it again in 1999 but eventually fell out of favour and had short spells with both Chelsea and Manchester City in the Premier League.

But he scored just four goals in the English top flight though before returning to France – though he did add the FA Cup to his trophy collection with the Blues.

At international level, Weah was unable to help Liberia reach a World Cup but he did play in two Cup of Nations, scoring against Mali in 2002.

From sport to politics

Weah is not the first sports star to move from the pitch to the political world.

Sebastian Coe went from Olympic champion to the House of Lords, via the Commons, and is now head of athletics’ world governing body the IAAF.

One of Britain’s greatest Paralympic athletes, Tanni Grey-Thompson won 11 gold, four silver and a bronze medal at five Paralympic Games. In 2005, she became a Dame and in March 2010 was made a life peer and sits in the House of Lords as Baroness Grey-Thompson.

Cricketer Imran Khan captained Pakistan to victory at the 1992 World Cup, but he has spent the past 20 years in politics. He formed the Pakistan Tehreek-e-Insaf party in 1996 and has been leader of the opposition since 2013.

Chess legend Garry Kasparov stood for the Russian presidency in 2007 and is an outspoken critic of Vladimir Putin. He is chairman of the Human Rights Foundation.

As a boxer, Manny Pacquiao won world titles at five weights over a 12-year career, with his pay-per-view fights earning a reported $1.2bn (£893m). But he is now a senator in the Philippines.

Vitali Klitschko, the three-time world heavyweight champion boxer is mayor of Kiev in his native Ukraine. He has previously spoken of his desire to run for the country’s presidency.

He was a great player, but also – what a person. After he came to Chelsea he walked in the dressing room and asked me: Can I sit next to you?

Can you imagine? I said: ‘Dude, you can sit wherever you want’.

We used to call him ‘Mr Weah’, because he was a top man. His personality and the game, together – that made him who he is today.

Now, having been elected president, he has got what he has been fighting for for so long.

Ex-Bermuda striker Shaun Goater was at Manchester City when Weah joined in 2000.

Good luck to him, because he was brilliant. He came in and was just so humble. This was one of the world’s best players – we were just thinking: ‘My…’

When he was leaving, I was out doing extra training and I said: ‘George have you got any spare boots?’ You just wanted to have something of his. But in the dressing room everything was cleaned out. They took the lot! 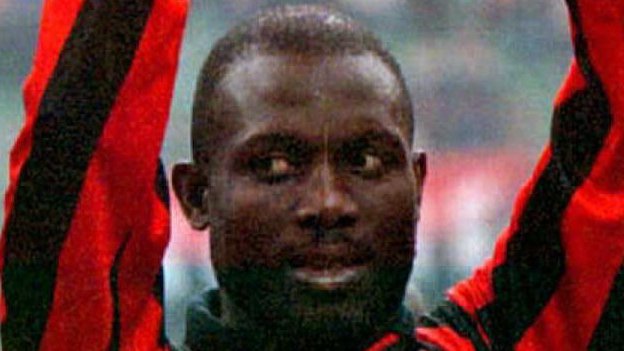