Strange stories in Africa in 2017

A lot of momentous events took place in 2017, including the resignation of Zimbabwe’s President Robert Mugabe and similar changes in The Gambia and Angola.

Not to forget a court’s annulment of the presidential election in Kenya, the first in Africa.

We have also reported on stories of tragedies and innovations – but here are some of the stranger stories of the past year.

A Kenyan man pictured eating githeri, a popular meal of boiled maize and beans, which is filling, nutritious and cheap, during Kenya’s election in August, gained fame for just looking ordinary:

Martin Kamotho’s nonchalant posture, adorned in a simple jacket, with his cheeks bulging from the githeri stuffed into his mouth and his left hand carrying a polythene bag, endeared him to many Kenyans.

He represented many things to different people but many thought the builder was the defiant, carefree, and ever-so cheerful face of an average Kenyan.

Mr Kamotho is now widely known as “Githeri Man” and has been an inspiration for several memes:

With his appeal growing by the day, Kenyan companies saw a marketing opportunity and sought to be associated with him.

He has so far been gifted a land, a paid holiday in the country’s famous Maasai Mara park, and smartphones for his family.

Mr Kimontho was even among 59 citizens who received a presidential commendation for their service to the country during Kenya’s independence day celebrations.

According to the Daily Nation newspaper, the award was set up to honour people who have shown “exemplary qualities or achievements of heroism, patriotism or leadership”.

Some Kenyans are still wondering what Mr Kimotho actually did to merit such an honour.

In April, a Nigerian road safety organisation disciplined a senior commander after he was filmed punishing female employees by cutting off their long hair.

Photos showing the male commander taking a pair of scissors to the women’s hair at an inspection parade sparked outrage online.

There women were apparently in breach of rules governing the hairstyles of female staff at the Federal Road Safety Corp (FRSC).

An FRSC spokesman said the officer’s action was “outside” the organisation’s mandate.

Lauretta Onochie, an aide to Nigerian President Muhammadu Buhari, condemned the haircuts as a “humiliation of women” in a post on Twitter.

A common exhortation used by evangelical church leaders to their congregations is that they should be like thermostats not thermometers.

The latter measures temperature while the former changes it.

Christians, these evangelical preachers say, should therefore influence the behaviour of people around them.

A new South African church is however challenging this perception by targeting drinkers and smokers, whose habits are generally shunned by evangelicals.

The Gobola Church in Johannesburg has opened its doors and bottles to these groups of people, serving them beer during services, South Africa’s eNCA news site reported.

The church’s Bishop Tsietsi Matiki said that the church was a “perfect place” for drinkers and smokers.

According to a member of the Gobola church, alcohol is only served to those who are at least 20 years old, two years above the age approved by South African law.

Last year we profiled some evangelical leaders in Africa who claim to be miracle workers to attract people to their churches.

In June, police in Mozambique warned bald men to be alert after reports that they had been the targets of ritual killings.

The police commander of Mozambique’s central Zambezia province warned that the attacks were linked to a belief that bald men’s heads contain gold.

At least three men had been killed when we reported the story.

A move by MPs from Uganda’s governing party NRM to amend the constitution to remove the upper age limit for presidential candidates was resisted by fists and kicks in parliament.

Opposition lawmakers say the move to scrap the limit is part of a plot to clear the way for President Yoweri Museveni, 73, to run in the 2021 election.

Under the current constitution, a person standing for president must be no more than 75.

Wabunge wapinzani MPs from the opposition Economic Freedom Fighters clashed with security men in February as they ignored several calls not to disrupt President Jacob Zuma’s state of the nation address.

An intense brawl broke out as the security men attempted to eject the lawmakers.

They finally managed to remove the lawmakers but it was a spectacle:

The 24 women were arrested and charged with indecency but the charges were later dropped.

The raid had been conducted by a police unit in charge of enforcing morality.

If the women had been convicted, they could have faced punishment of 40 lashes and a fine for wearing “an obscene outfit”.

Rights activists say tens of thousands of women are arrested and flogged for indecency every year, and laws can be applied arbitrarily.

They say the law in Muslim-majority Sudan against wearing trousers and short or tight skirts discriminates against Christians.

“The party took place in a closed hall in a building in El Mamoura [south of Khartoum],” she said.

“The girls were arrested for wearing trousers, despite obtaining a permit from the authorities [for the party].”

The manager of English football team Arsenal, Arsene Wenger, continues to divide the club’s supporters, on the continent and elsewhere.

In November, while most Zimbabweans were concerned with the military takeover and thousands marched through the streets of the capital, Harare, to demand the resignation of long-time leader Robert Mugabe, some took the time to demand that Wenger should also step down.

But it had been a theme throughout much of the year. This was spotted during a football game in Ethiopia, on 16 April, days after Arsenal lost to lowly Crystal Palace in an English Premier League match:

The sign also made an appearance in a Kenyan music concert, of all places:

A Kenyan man puzzled many for days after he gave witness accounts to two fatal accidents, in two different parts of the country.

A picture of the man’s two appearances on local TV was widely shared on social media.

The man who identified himself as Dennis Muigai gave an interview to Citizen TV after a fatal helicopter crash on 21 October, in which at least five people were killed.

He was again the main witness during a 7 November fatal crash in Murang’a, in central Kenya, some 200 km (124m) away from the first accident, in which a local governor died.

He told another TV station, NTV, that he was a passenger in a police car when the accident happened and gave a detailed account of what he saw.

According to Nairobi News he said that the first thing he did after the crash was to secure the governor’s bodyguard’s gun and the occupants’ personal belongings.

Police later arrested Mr Muigai for impersonating a police officer, local media reported. It is not clear what has happened to him since.

In both his TV appearances he donned sunglasses connected to an ear piece, a look that sparked the hashtag #WitnessChallenge on Twitter as many attempted to copy and mock his look: 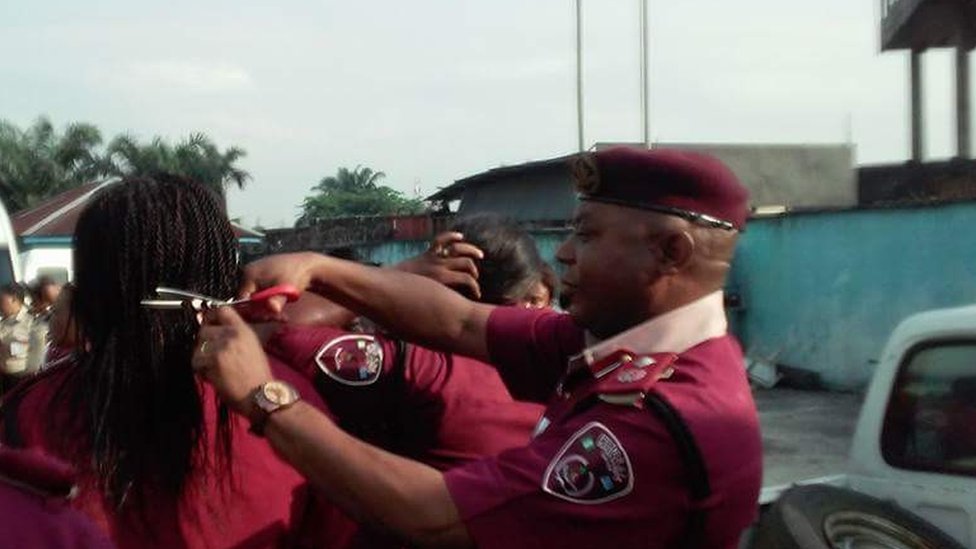 40 kids missing during Xmas holiday in ...