Mrs Sirleaf defeated Mr Weah in the presidential election run-off in 2005, after the end of a brutal civil war.

As news of Mr Weah’s victory emerged on Thursday, his supporters began celebrating in the capital Monrovia.

The former football star’s campaign – under the Coalition for Democratic Change banner – appealed to the youth vote, while incumbent Vice President Mr Boakai was seen as old and out of touch.

But Mr Weah’s election is not without controversy, as his running mate is Jewel Taylor, former wife of the warlord and ex-President Charles Taylor, who is serving a jail sentence in the UK for war crimes.

Who is George Weah?

When sports stars make a run at politics

Mr Weah, 51, won the first round of the presidential election in October with 38.4% of the vote, compared with the 28.8% won by second-placed Mr Boakai, 73. The failure of any candidate to secure an outright majority forced the run-off.

The National Elections Commission (NEC) said on Thursday that with 98.1% of the run-off vote counted, Mr Weah had won 61.5% of the vote while Mr Boakai was far behind with 38.5%.

Mr Weah played for a string of football clubs, including AC Milan, Chelsea and Paris St-Germain, and is the only African footballer to have won both Fifa World Player of the Year and the Ballon D’Or.

He entered politics after his retirement from the game in 2002 and is currently a senator in Liberia’s parliament.

Liberia, founded by freed US slaves in the 19th Century, has not had a smooth transfer of power from one elected president to another since 1944.

Ms Sirleaf took office in 2006, after her predecessor President Taylor was forced out by rebels in 2003, ending a long civil war.

Taylor is serving his 50-year prison sentence in the UK for war crimes related to the conflict in neighbouring Sierra Leone. 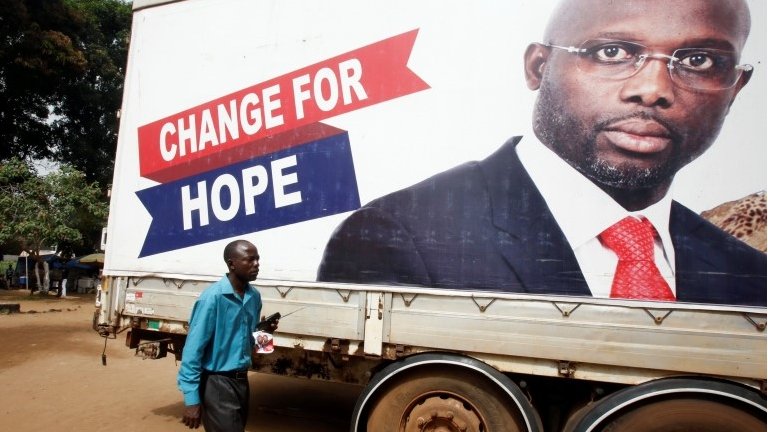