Mystery of the golden harp

In 1962 Igor Stravinsky, the Russian-born composer and conductor, went to South Africa to conduct the state broadcaster SABC Symphony Orchestra in a series of concerts. It was the height of apartheid – and the regime believed classical music was the domain of white people. The BBC’s Sophie Ribstein takes a walk down memory lane to see if a certain imposing harp was used in the concert.

It was like travelling back in time. The walls were covered with the brown carpet, the architecture was brutalist.

As I walked down the long dark corridors of the headquarters of the SABC – South Africa’s state broadcaster – I could have been stepping into the 1970s, when the apartheid regime occupied the building and the airwaves.

SABC was once the core of the racist state’s propaganda machine.

I then turned a corner, pushed past a metal blue gate, walked into the music library… and everything changed.

I had come to see a relic from that era – a rare, golden concert harp, beautifully sculpted by the famous American harp maker Lyon and Healy.

This exceptional instrument once shone from the grandest stages in the country.

The principal harpist of the SABC orchestra would play it at classical music concerts – that, in those days, only white people were allowed to attend.

Now, the majestic harp was standing silent, under a dust cover in the corner of a room that also belonged to the past.

I’m a harp player myself, and I had heard about this instrument from the man who made my own harp back in France.

I delicately unwrapped it, sat down and embraced it to my right shoulder.

My heart was pumping. I started to play and as my fingers danced from one string to another, the sound was so pure and profound, I felt both thrilled and content.

When apartheid ended in the early 1990s, the SABC’s “white” orchestra was disbanded, and its remains were left in the library.

Alongside the instruments, were hundreds and thousands of music scores, many of them hand-written, among other relics from that time.

On the wall, I spotted a set of black and white photos… of Igor Stravinsky in South Africa.

Why, I wondered, had this famous Russian composer decided to come here? The year was 1962 and the country was in turmoil because of the repressive segregationist regime.

I later learned that Stravinsky had been invited to conduct the SABC orchestra, but what was remarkable about his tour, is that he had insisted on also performing for a black audience – and the authorities allowed him to, in KwaThema, a township 40km (25 miles) outside Johannesburg.

“I just want to perform for human beings,” the composer had explained.

I wanted to know what Stravinsky’s black audience made of it all. How had they even heard of him, at a time when the government considered classical music the domain of white people only?

Prince Thethe has vivid memories of the concert.

I met the tall, charismatic, 82-year-old choir master in the massive, cold hall in KwaThema where Stravinsky performed.

“It was the first time I stood close to an orchestra! I could not believe it! As Stravinsky’s hands went up, the audience went berserk,” he told me, almost jumping on stage, imitating the great maestro.

“There was ululating, there was whistling! But as soon as the music started, you could hear a pin drop.” During apartheid, he explained, just entering a sheet-music shop was taboo.

I pictured the scene in my head: A thousand people gathered in this hall, listening to each note, watching every move of the musicians and the diminutive Russian conductor.

And right at the back of the orchestra, had the golden harp been there too?

When a BBC colleague found, by chance, the recording of that concert in the SABC archives, we listened carefully to The Fireworks Suite, to extracts of Pulcinella and Petrushka.

The tape had probably not been heard for 55 years. We were overwhelmed. But, there was no sign of the harp on the recording. It was a tantalising, unresolved mystery.

And so, contemplating that history, I sat behind my instrument at home one day and played a very short piece of music: A canon composed by Igor Stravinsky at the end of his trip.

He based it on the notes “S, A, B, C” – S being the equivalent of E flat – to thank the orchestra for inviting him. 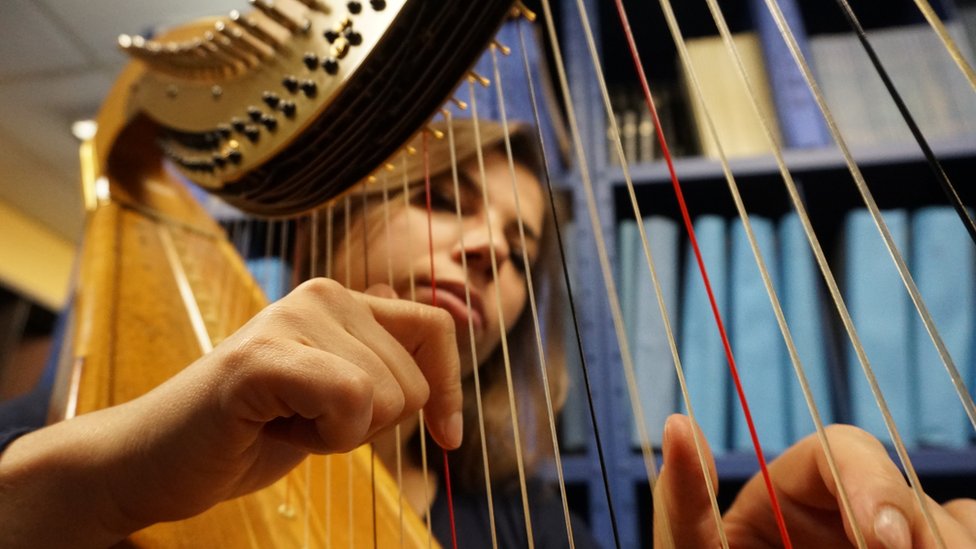