Through the lens: The photographers capturing Africa’s year

What does it feel like to capture the defining moments of Africa’s biggest news stories of 2017 on camera? Here, four photographers tell the BBC about their favourite shots from the year.

Mike Hutchings is Reuters’ chief photographer in southern Africa. Based in Cape Town, he travelled to Zimbabwe in November to document the military takeover which would eventually unseat Robert Mugabe.

Earlier in the day, Hutchings had been taking photos outside the parliament while lawmakers were discussing the impeachment of President Mugabe.

But the feeling was “pretty low key” – albeit with “a sense of anticipation”. After filing those photos, he decided to walk around Unity Square, outside the parliament, one last time.

He was looking for a taxi when a colleague phoned him and told him President Mugabe had resigned.

Hutchings ran to the street corner with his camera and heard a huge eruption of cheers and joy from a group of people – that is the moment he captured.

“I like the energy and the relief of the photo,” the photographer explained. “It felt really good to be there at that particular time and share that moment.”

Like millions of teenagers around the world, Zeinab does her make-up carefully before she goes to school each morning.

Unlike millions of teens though, the 14-year-old has already been married – forced into it by her family.

Zeinab’s family are among almost 900,000 Somalis who have fled their homes, not because of war, but because of a drought and the very real risk of starvation it brought with it.

But reaching the aid camp costs money, and Zeinab’s dowry would earn the family $1,000 – enough to make the journey.

Zeinab refused, however. She ran away and hid in the forest, but eventually she was brought home, locked in a room and forced to marry a man almost four decades older than her.

The family, along with Zeinab and her new husband, finally made the journey to the camp in Dallow.

It was three days since the couple had married: Zeinab wasted no time. She wanted a divorce – and he wanted his money back.

Bensemra first met Zeinab in her shelter in the early morning, when the light would be perfect to capture this teenager’s daily routine.

She had been saved, in the end, by an Italian aid group, who had agreed to pay the money.

Now she was like any other teen – initially reticent to apply her make-up in front of the photographer – getting ready for the school day.

“Why are you applying make-up to go to school?” Bensemra asked.

But that is not the image Bensemra treasures of Zeinab. Instead, it is the young girl “walking to school, holding her books, walking like star”.

“She had nothing but she still wanted to study – I am happy I met her.”

Nigerian photographer Akintunde Akinleye went to Maiduguri, in the north-east of the country, to meet the men fighting back against militant group Boko Haram.

As a Nigerian currently living in Canada, people often ask Akinleye if the whole of Nigeria is at war.

“It’s just a fraction of the country,” he says. “Many Nigerians don’t even know what’s going on there, but it affects everybody in the country. It’s a big problem.”

But Akinleye was desperate to show a different side to the war – a side he captured in this image of 38-year-old Dala Aisami Angwalla, one of 30,000 volunteers with the Civilian Joint Task Force (JTF).

Angwalla may have been injured in an ambush, but Akinleye did not want to focus on that. Instead, he asked his subject to gaze into the camera – not as a victim – but as if he was asking the world a question.

“People think everyone living in the north-west of Nigeria, especially the youth, belong to the insurgency,” the photographer explained.

But Angwalla said it was important to him to show that this isn’t true: He wants to protect his home and his community from Boko Haram.

It is not easy. Angwalla says that the Boko Haram members live within the community, alongside the vigilantes.

South African photographer John Wessels travelled to the Kasai region in the Democratic Republic of Congo in August with Oxfam.

“There’s a moment of silence, a moment of quietness and reflection in this photo,” Wessels says, pointing to the picture of Anny Mafutani, 30.

The young woman, one of thousands to flee her village to escape the fighting, is surrounded by everything she was able to escape with, in a church where displaced people are seeking safety.

Her story stayed fresh in Wessels’ memory for her determination to survive: Those possessions were already packed, ready, long before the militia actually arrived.

It meant when gunshots echoed out across the village, Mafutani and her five children were ready to run for the forest.

Her husband was less lucky – he was shot and killed as he tried to escape. She was unable to stop for him.

Mafutani and her five children spent months in the forest. There wasn’t enough food for them in the package they had prepared so she brought them to this church.

And yet, she still wanted to make sure she was camera-perfect. Mafutani left Wessels in awe.

“She could take five people, survive in the forest, but still wanted to take a scarf and put it on to look as good as possible,” he recalls.

All four of these photographers were interviewed for a series on BBC World Service Focus on Africa, talking about their photos to illustrate a few of the biggest African news stories of the year. 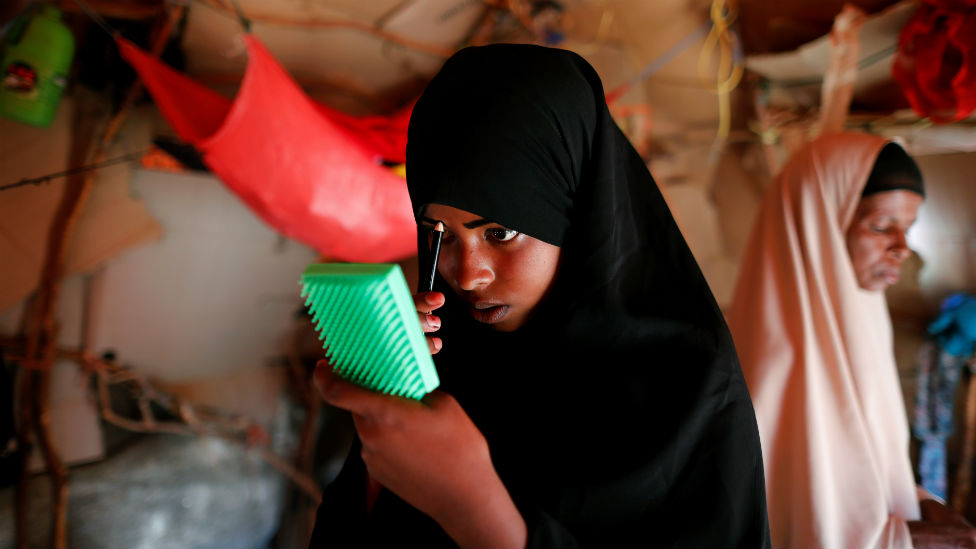