Pape Diop in emotional tribute to Espanyol after Eibar switch

Senegal international Pape Diop has taken to social media to pay tribute to Spanish club Espanyol after sealing a move to rivals Eibar.

The 31-year-old terminated his contract at Espanyol – after making five appearances this season – before signing a deal at Eibar until 2019, with an option for an additional year.

“This is one of the most difficult moments of my sports career,” Diop, who scored three goals in 58 appearances for Espanyol, posted on Instagram.

“It’s hard to have to say goodbye to this great family. We have shared good and bad moments, but I have always faced them with the commitment to help as much as possible.

“I can only thank the club, directors, employees, technical bodies and, of course, all my teammates for their love and closeness to make me feel like a family since I arrived.

“It has been a privilege for me to be part of this wonderful minority. Now I am starting a new adventure,” the Senegal midfielder said.

Diop started his career at French side Rennes and spent two seasons at Tours, before moving to Spanish club Gimnàstic in January 2008, where he scored four goals in 42 appearances.

Successful spells followed at Racing Santander and Levante, which led to a three-year move to Espanyol in August 2015.

After a brilliant start to his career in Barcelona, the versatile midfielder struggled for regular first team football this season before mutually terminating his contract with the club.

Diop made his debut for Senegal in a 2-1 friendly win against Gabon in November 2010.

He won 19 caps and scored twice, and also played for the Teranga Lions in the 2015 and 2017 African Cup of Nations tournaments. 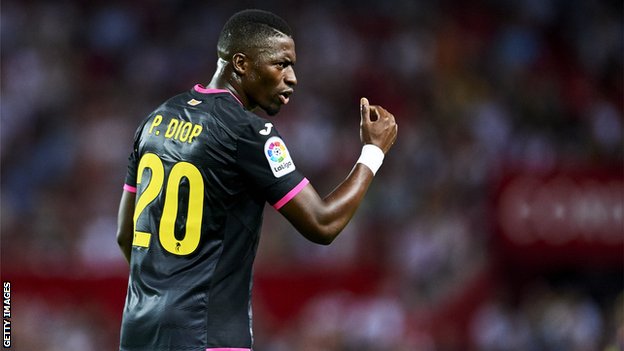