In the latest in our series of letters from African journalists, Adaobi Tricia Nwaubani looks at why – despite knowing the risks – Nigerians are willing to make the dangerous journey across the harsh desert and unpredictable seas to reach Europe.

Many migrants deported from Libya to Nigeria will tell you that they had indeed heard of the horrors that lay on the path to Europe, the slavery in Libya, the drowning in the Mediterranean, long before they left home in search of greener pastures.

Activists also say that they frequently show graphic videos in schools, markets and other public places, enlightening people in high-risk areas about the dangers of being trafficked to Europe.

Yet, these tragic stories are usually not enough to put off determined migrants.

“People feel that the ill-luck that these [migrants] have will not come to them,” said Josiah Emerole, head of press at Nigeria’s anti-trafficking agency, Naptip.

This attitude can be traced to a prevailing belief system in Nigeria. Long before Christianity and Islam became the two main faiths in the country, Nigerians, like the majority of Africans, believed in the existence of supernatural forces, which control one’s fortunes in life.

And so, if you were walking up the stairs on your way to a job interview at Shell Petroleum, tripped and cracked your skull, there has to be more to it.

Why did you slip? Why that day in particular? That same day, millions of people were climbing up and down stairs in different parts of the world and they did not slip. Yet, you did. On your way to a lucrative job interview. Why? Why you?

Some unseen force must have been behind it.

Similarly, thousands of migrants do make it across to Europe every year. They eventually send money back home for their families to build mansions and their siblings to attend school.

You, why did the boat in which you were travelling capsize in the middle of the sea? Why were you captured by Libyan militia when you were only 30 minutes away from Italian shores? Why were you deported? Why you?

“The more powerful a particular spiritual expert is reputed to be, the more people flock to seek his or her intervention”

Juju priests often came in handy to unravel these kinds of mysteries and to proffer solutions.

Many Nollywood films feature these mediators between mere mortals and pagan deities, diligently doing their work.

They could diagnose anything from an evil spell cast by a malicious relative or jilted lover to a family curse, and then prescribe rituals that should nullify these.

Over time, people have learnt to not wait for something to go wrong first before they delve into the spirit realm.

With the increased influence of Christianity and Islam, more and more Nigerians have (openly, at least) turned away from juju priests.

Some pastors are known to organise special prayer sessions where the unseen forces behind anything from failed marriages to failed visa applications can be fettered or placated.

Muslims also have their spiritual experts, popularly known as “malams”.

The more powerful a particular spiritual expert is reputed to be, the more people flock to seek his or her intervention.

Where one pastor, malam or juju priest has failed to appease or cajole the unseen forces for you, another may very well succeed.

Migrants who feel certain that they have the right spiritual forces on their side may then proceed to the Sahara Desert and beyond, confident that whatever tragedies have befallen others “is not their portion”.

Shortly after the woeful plight of thousands of African migrants in Libyan detention camps aired on CNN and sparked outrage across the world, President Muhammadu Buhari announced that his government would make arrangements for Nigerians stranded in Libya to return home.

A few aeroplane-loads have since landed in Lagos.

But, some migrants have turned down the government’s offer, according to Nigeria’s Minister of Foreign Affairs, Godfrey Onyeama. They prefer to remain in Libya, perhaps confident that it is only a matter of time before the unseen forces finally work in their favour.

One deported migrant told me only two weeks ago about a group of friends from his community who were just about to set off for Libya, despite the CNN video and the wave of deportations.

Alarmed, I asked why he didn’t try to stop them.

“I’ve not told anyone not to go,” he said. “It’s a game of luck. Let them go and try. If he believes in his own god, let him go and see if he will succeed.” 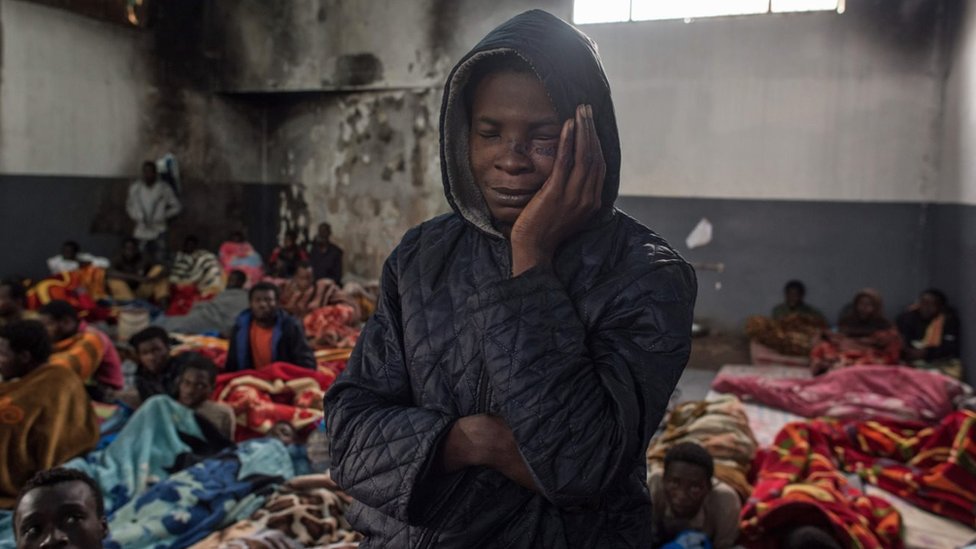