In the dry heat of a South African savannah, a team of scientists is listening intently to the low rumbling sounds emitted by the world’s largest land animal, the African elephant.

Elephant communication is interesting because the frequency of their vocalisation is so low that it cannot be properly heard by human beings.

But by attaching a radio transmitter to these animals, the scientists from the University of Pretoria are able to record and analyse the animals’ chatter, hoping to unlock some of the pachyderms’ linguistic mysteries. And from that, hopefully help conservation work.

This project hinges on a simple, often-overlooked, piece of kit – equally vital if you are, say, flying an air ambulance across Norway or simply reading this article via a wireless link – the humble antenna.

Antennas – pieces of metal more often encased in plastic – allow data to be transmitted and received via radio waves.

Most of us don’t give them a thought unless they stop working, but for South Africa’s Andre Fourie, they are a bit of a passion.

“Antennas are very interesting things,” says the 56-year-old. “They are highly complex to design, but relatively low-tech to manufacture.”

Mr Fourie is the founder and chairman of one of the world’s leading antenna designers and manufacturers – a South African business called Poynting.

Johannesburg-based Ponyting started making antennas in 2001, and now exports them around the world. Its customers include the Norwegian Air Ambulance, the German Olympic sailing team, and numerous mobile phone networks.

While the South African economy is better known for its mining industry rather than its hi-tech sector, firms like Poynting have greatly benefited from Africa’s telecommunications shift.

Rather than digging down to build a network of physical telephone and broadband cables, countries across the continent have gone straight to mobile phones and wireless connectivity.

This has created a huge demand for antennas over the past two decades, and Ponyting has raced to meet this. The company has also developed a range of antennas that work deep underground for mining companies.

“Africa is little invisible laboratory – we had all sorts of unique telecoms problems so we started making things that no one else in the world was making,” says Mr Fourie who had first studied antennas while at the University of the Witwatersrand in Johannesburg.

“We then realized that there was a demand elsewhere in the world. More than 16 years ago we were making outdoor antennas for farmers.

“Nowadays we sell thousands of units all over Europe and elsewhere, because [the world] is moving to… wireless [internet] access.”

Mr Fourie adds that when it comes to designing antennas the magic lies in the precise shape of the bends in the metal needed to pick up and broadcast a specific frequency.

The design is so intricate that Poynting has written a specialist computer programme in order to optimize the shape and sizes of their antennas for a wide range of uses. And Mr Fourie himself owns 18 different antenna patents.

To continue the company’s global expansion, Poynting opened a European office in Germany earlier this year, and launched a second manufacturing facility in China to keep up with demand. The Chinese plant now produces half the firm’s output.

Michael Howard, Poynting’s chief executive, says that the company’s growth has been in annual double digits growth for most of its existence, “limited only by our own resources”.

“We’ve gone from manufacturing a few hundred units in our first year to now producing tens of thousands of units every single year.”

The firm’s turnover is now more than $8m (£6m) a year, with the main markets being Europe and Australia, while exports are growing in Asia.

Mr Howard says that Poynting has also worked hard to make sure it offers good customer care as a way to stand out.

“Over the years we’ve built a good rapport with our customers, which differentiates us from products coming from elsewhere.”

While most of Poynting’s sales come through its established distribution networks, director Corinna Howard says that maintaining a good website is “vital for any business if it wishes to have a footprint in other countries”.

“It allows potential clients an insight into the business and its product portfolio. It also immediate contact with an consultant that can be of assistance with queries,” she says.

“No business can afford not to have a website.”

Dr Enrico Calandro, from the Cape-Town based technology sector think tank Research ICT Africa, says that Poynting has been a “pioneer” in its sector.

He says that it and other African tech firms can become globally competitive, and that governments should do more to support their growth.

One of Poynting’s most high profile contract wins was being selected as part of the world land speed record attempt by the UK-based Bloodhound Project.

Poynting’s antennas are mounted inside the tailfin of the Bloodhound car, which is powered by a jet engine. The aim is to hit a new record speed of 1,000 mph (1,600 km/h) next summer.

Video and data will be streamed directly from the vehicle using Poynting’s equipment, back to the base stations, and then onto the world via an internet connection.

Million of people, including some who could be the next generation of scientists and engineers, will be able to live stream the record attempt at supersonic speeds, thanks in a large part to a little bit of specially-shaped metal covered in plastic. 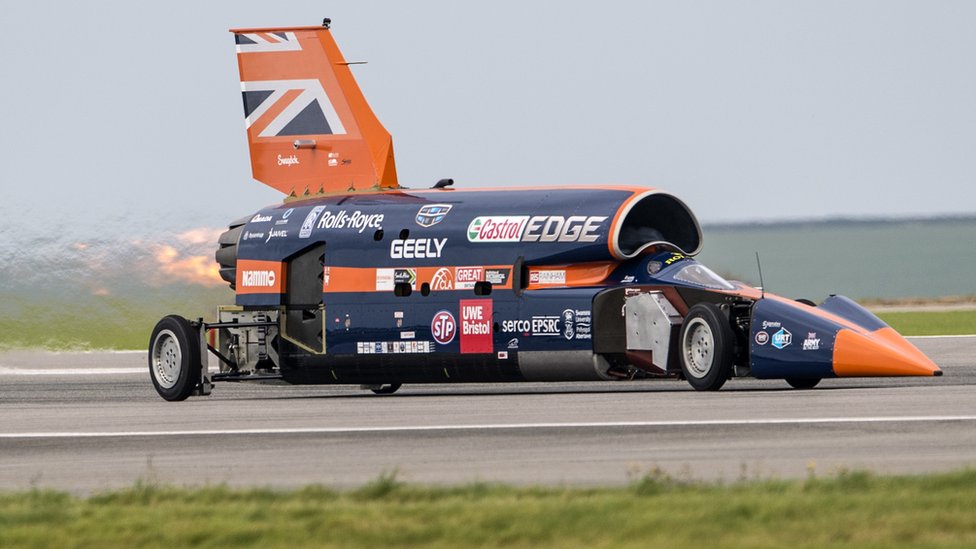 Ghanaians in diaspora to vote in general ...