Mogadishu, Dec. 11, 2017 (AltAfrika)– Aamin Ambulance, the Somali capital’s first and only free private ambulance service has received a sum of $32,966 from a fund raiser started by a national resident in Sweden.

Abdi Addow, opened a gofundme page to raise funds to support the ambulance service right after the twin bomb blasts that hit Mogadishu on October 12, 2017. The outfit also credits one Nadifa Mohamed for being a key fund raiser.

Aamin Ambulance is reputed as the first emergency service almost always at the scene of bomb blasts which are frequent in the country. It has offered first aid to bombing victims for over a decade. 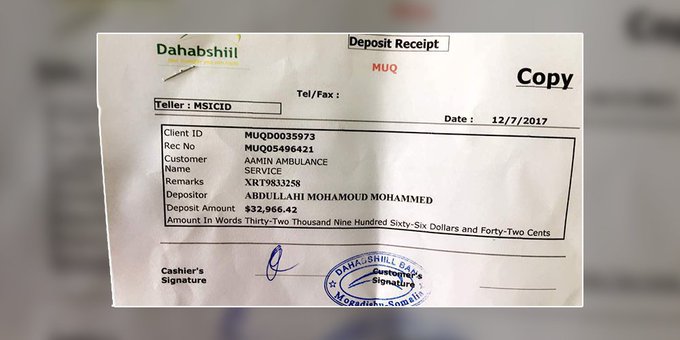 Two amazing individuals Abdi Addow (@AbdiAddow1) & Nadifa Mohamed (@thesailorsgirl) started raising funds for @AaminAmbulance two months ago. Today we have received their raised funds of $32,966.42. Thank you for the support & the donations. THANK YOU VERY MUCH!

He said the money he hoped will help improve communications, medical supplies, vehicles and human resource in order for Aamin Ambulance to be able to provide quicker emergency response. “Please support the unsung heroes and heroines of Aamin Ambulance,” he appealed on the page.

Even though they currently own a fleet of 10 ambulances which is the largest in the country and they have a team of volunteers who respond quickly to emergencies, the amount raised is to be invested in three new ambulances and repairs to the existing fleet. @AaminAmbulance intend to spend the raised money on 3 new ambulances and repairs to their existing fleet. Anyone know where we can find some good 2nd ambulances?

Aamin Ambulance works in partnership with the Somali federal Government, UNOCHA, UNDPand WHO.

The October twin bomb blasts, described as the single deadliest attack ever in the Horn of Africa nation, claimed over 500 lives according to a government committee.

The impact of the truck bomb the committee established, was worsened by it exploding next to a fuel tanker that increased its intensity and left many bodies being burnt or mutilated beyond recognition.

“So far we have confirmed 512 people died in last month’s explosion … (Some) 316 others were also injured in that blast,” Abdullahi Mohamed Shirwac, chairman of the Zobe Rescue Committee told Reuters.

The bomb attacks were the deadliest since militant group al Shabaab began an insurgency in 2007. Al Shabaab has not claimed responsibility, but the method and type of attack – a large truck bomb – is increasingly used by the al Qaeda-linked organisation.

Al Shabaab stages regular attacks in the capital and other parts of the country. Although the group says it targets the government and security forces, it has in the past detonated large bombs in crowded public areas.

It has sometimes not claimed responsibility for bombings that provoked a big public backlash, such as the 2009 suicide bombing of a graduation ceremony for medical students

Beyond Leadership & Operationalisation of subsidiarity in ...