Egyptian Mohamed Salah has been voted BBC African Footballer of the Year for 2017.

“I am very happy to win this award,” the 25-year-old told BBC Sport.

“It’s always a special feeling when you win something. I feel like I had a great year, so I’m very happy.”

Salah, the Premier League’s top scorer with 13 goals, has enjoyed a stellar year for both club and country.

In early 2017, the forward was the central figure for Egypt as they finished runners-up at the Africa Cup of Nations.

He also had a hand in all seven of the goals that took the Pharaohs to their first World Cup since 1990 – assisting two and scoring five, including the stoppage-time penalty against Congo that qualified them for Russia.

“I want to be the best Egyptian ever so I work hard,” added Salah, who is the third player from Egypt to win the award and first since 2008.

Salah’s form at club level as been every bit as impressive as it has in internationals.

In Italy, he scored 15 goals and made 11 others as he helped Roma finish second in Serie A, their best league placing in seven years, prior to joining Liverpool and scoring 13 times in his first 16 league games.

“Since I came here, I wanted to work hard and show everyone my football. I wanted to come back to the Premier League since I left, so I am very happy.”

Salah has taken the Premier League by storm this season, in contrast to a less impressive spell in the division with Chelsea between 2014-15.

“It’s well-deserved,” said Liverpool boss Jurgen Klopp, who handed the trophy to the player at the club’s Melwood training academy.

“I am a really lucky person. I had the opportunity to work with a few outstanding players and I am happy that it is now with Mo.

“The good thing is that he is still young, there is a lot of space for improvement, a lot of potential still that we can work on, but that’s how it should be. It’s a big pleasure, to be honest, to work with him.”

By winning the BBC African Footballer of the year prize Salah adds his name to a list of legends including Jay-Jay Okocha (Nigeria), Didier Drogba (Ivory Coast) and Michael Essien (Ghana).

“I am very happy to be like them in winning this award,” said Salah, who follows compatriots Mohamed Barakat (2005) and Mohamed Aboutrika (2008) in receiving the trophy. 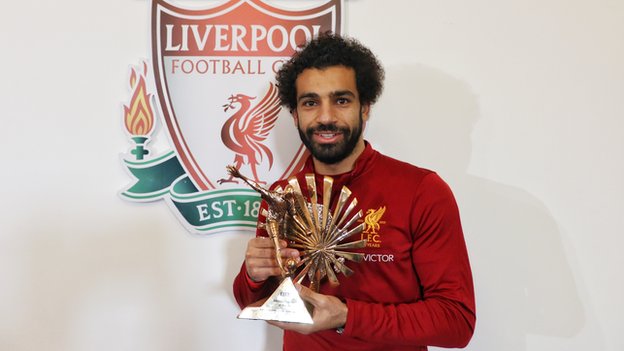