Ed Sheeran has won huge success this year, but a more dubious honour has just come his way.

The UK singer’s short film for the British charity Comic Relief has been handed a “Rusty Radiator” award, given to the “most offensive and stereotypical fundraising video of the year”.

It shows Mr Sheeran travelling to Liberia, and meeting two young boys who are sleeping in a boat on the beach. He is so touched by their plight, he decides to act then and there, offering to put them up in a hotel until a more permanent home can be found.

The advert has been viewed more than six million times, and was part of a fundraising effort which eventually raised more than £80m ($109m) for causes around the world, including helping children in Liberia.

It touched a nerve, and made people pick up their phones and donate, so what exactly is wrong?

“It’s not really about what was wrong with the video,” Ugandan photographer and Rusty Radiator juror Edward Echwalu told the BBC. “But the general mentality that they have to bring a western celebrity with them.

“They have no idea about what’s on the continent. Look at him: he got emotionally attached to the situation, it tells me that he had no idea and he was not ready to be confronted with the kind of hardship people in some African cities contend with.”

So why do charities like to bring celebrities into these videos?

“We would like to be able to talk to the public directly, but what we find is if we wanted to talk about the fantastic work we do, people on breakfast television are not going to have me on to speak,” ActionAids’ Mike Noyes said.

“The reality is, whether it is breakfast television, Cosmopolitan magazine or the Daily Mail, it is the combination of the celebrity which makes it interesting and accessible.”

But Mr Sheeran has also been accused of playing the “white saviour” – swooping into people’s lives and making grand gestures, but, some think, making it all about themselves, with little understanding of the wider situation.

Too much of this particular video was focused on Mr Sheeran’s experience, Mr Echwalu said – much like the people who go to volunteer in countries around the world, and spend their time uploading selfies to social media.

For Mr Echwalu, it detracts from what should be the focus – the experience of the person who they are meant to be helping.

The organisers behind the Rusty Radiators have another category, the Golden Radiator Award, for “the most nuanced, inspiring, and solution-oriented fundraising video”.

It went to Batman, by War Child Holland. “What a powerful video! Effective humanitarian crisis imagery”, said the jury.

What’s more, those who oppose videos like this one complain, they lack context to ensure people understand what is going on and, Mr Echwalu argues, play into a wider narrative – one which fails to reflect the diverse continent he knows.

“The West is extremely misinformed,” he said. “Definitely the continent has issues and depends on foreign aid.

“But if you do not understand the continent very well you might think we should depend on foreign aid. I personally strongly believe even without foreign aid, but with proper leadership, we would be fine.”

So how do exactly do you create a video which both respects the subject, and gets the message across?

For Mr Echwalu, who has spent a lot of time with the refugees seeking shelter in Uganda, the answer is simple – humanising people.

“Use the voice of the people. Not any child who cannot even state their name,” he says.

“An ideal way is to tell stories – positive stories about ambitions: we are here, we are starting a new life, where do you see yourself – that should be the approach.

“It means I do not have to assume. Yes, it might be plain and clear [they were in a bad situation], but I would use the voices of the people.”

Mr Noyes agrees. ActionAid International made the decision to move its headquarters to Johannesburg, South Africa, in order to be closer to, and understand better, the communities it is trying to serve. Hand-in-hand with that is putting the stories of those they help front and centre.

Unfortunately, the good news stories do not always make as big an impact as they would like.

“I think there is a media landscape: bad news is more interesting than good news,” he says. “The challenge is to tell the true story, with dignity and respect.”

Responding to the award, Comic Relief chief Liz Warner said they “rightly challenge organisations like Comic Relief to be as responsible, fresh and relevant as possible when conveying our issues.

“That’s a challenge we have always tried to meet and will continue to do so, perhaps now with a little extra energy.”

She added: “We’re grateful to Ed Sheeran for his time and commitment, to the people who’ve given money and to the people who run the projects we support. And we really hope that we don’t win this award again.”

And Mr Echwalu also wanted to make clear he knows Mr Sheeran had absolutely nothing but good intentions.

Mr Echwalu said: “It touched him and I’m glad. He meant well, but the act of taking one child for a couple of nights in a hotel? Long term, it is nothing. It does not aid the hundreds of others who were left behind.” 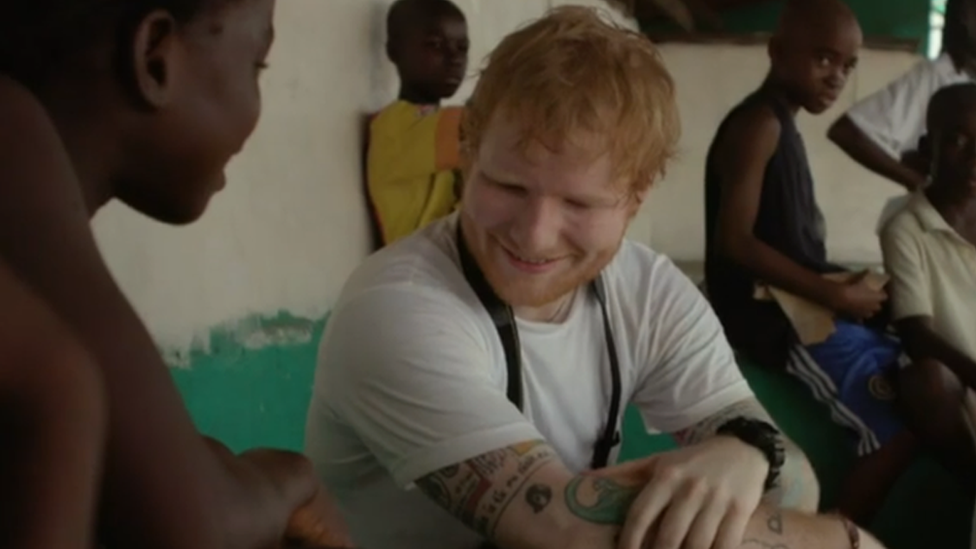 Hamas: US decision on Jerusalem is a ...