Among the throngs of tourists in Barcelona’s Old City, there’s a peculiar sight.

Men, mostly of African descent, walk around in groups clutching massive white blankets. What’s inside isn’t clear, but it’s bulky and heavy and the men move slowly in the heat.

When the men lay down their blankets though, all becomes clear.

Inside are cheap beach towels, knock-off sunglasses and Barcelona keepsakes, everything a tourist wandering in Port Vell or Las Ramblas might need, for €10 or less.

Most of all, however, there is fake sportswear. Trainers, hoodies and T-shirts, bearing the tags of big name brands but not the price tag.

Mustafa, a recent migrant from Mauritania, calls them “genuine fakes”.

“The people who buy from the stores are silly – this is just like the real thing, but cheaper,” he says.

Mustafa is one of thousands of ‘manteros’, literally blanket men, who operate in Barcelona and other Spanish towns.

They divide opinion in the city. They are completely unlicensed, and do not pay tax. Many have no papers or are in the middle of an asylum process, which precludes them from work. When the local police or Mossos arrive, they pack up and move.

But now, some are banding together to try to rebrand – literally.

Aziz Faye, a Senegalese immigrant and mantero himself, wants to put a new kind product on the blanket. So he’s launched a new conscious-minded fashion brand called Top Manta, which means blanket top.

“We launched our brand to give the guys a way out. We want to avoid a life of crime,” he says in Spanish as he shows off some sample trainers and T-shirts.

The shoes and T-shirts are bought unbranded and in bulk from Asia.

Top Manta labels are then sewn on in a warehouse outside the city before being distributed to sellers.

It’s a business model that Aziz hopes will finally give the manteros recognition and acceptance.

“Our aim is to stop selling fakes and to avoid copyright infringement,” he says.

It’s an impressive pitch, but despite the buzz over the new brand, most manteros have continued to sell counterfeit goods.

And what of the manteros’ competition?

Firmin Villar, shop owner and president of the Friends of La Rambla Association, says their presence takes away from local businesses.

“It’s unfair and illegal competition. They’re selling in front of our shops the same products that we’re selling in our shops, but they’re not paying tax.”

He dismisses the notion that anti-mantero sentiment in the city is fuelled by distrust of immigrants.

“Barcelona is a city made by immigrants, that’s not the issue. What we disagree with is the argument that they can only earn a living through selling on the streets. That’s not true”.

“As long as the product they sell is legal, is not a copy and they pay taxes like every shop pays, welcome to town.”

The issue of how to regulate the manteros is one that has local councillor Gala Pin scratching her head.

“In the public space we can’t be more permissive with one group than another,” she says, acknowledging the frustration of Mr Villar and others.

“But the informal economy isn’t just something limited to Barcelona and other big cities”.

There are many other less visible tax dodgers and unlicensed operators, Ms Pin says. And increasing the police presence in the Old City isn’t necessarily the answer.

“There’s no sense in militarising the public space. We need to change the immigration law that prevents someone from working simply because they are an immigrant.”

It’s a sentiment that Mr Faye agrees with.

“We came here not to take the country’s wealth but to be a part of things” he says.

More than anything, he hopes the Top Manta brand will change perceptions of himself and his colleagues. 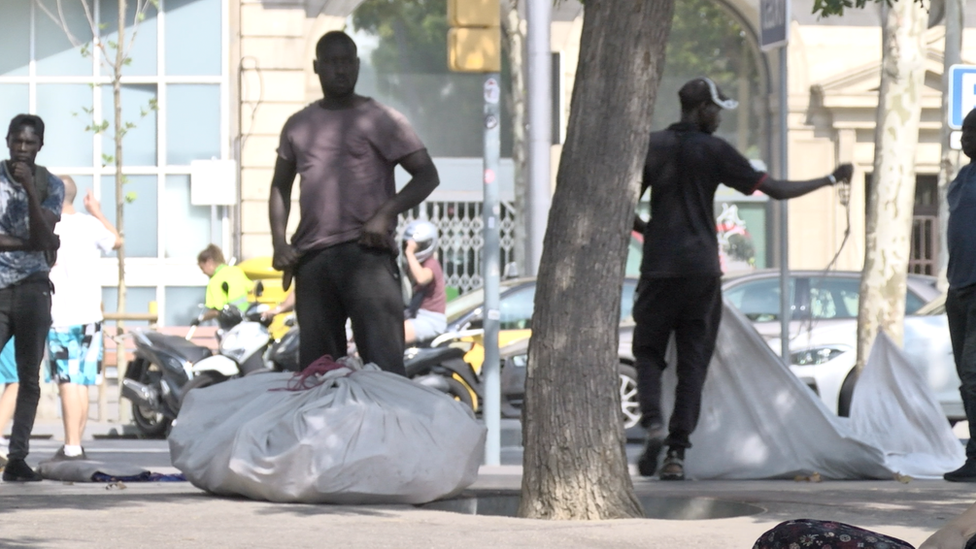