Lubaina Himid has become the oldest winner of the Turner Prize, and the first black woman to pick up the art award.

The 63-year-old Zanzibar-born, Preston-based artist won the £25,000 prize for work addressing racial politics and the legacy of slavery.

The judges praised her “uncompromising tackling of issues including colonial history and how racism persists today”.

She was named the winner at a ceremony in Hull, currently UK City of Culture.

Who is Lubaina Himid?

Described in February by The Daily Telegraph as “the under-appreciated hero of black British art”, Himid made her name in the 1980s as one of the leaders of the British black arts movement – both painting and curating exhibitions of similarly overlooked artists.

But she’s now got the recognition she deserves. Her section of the Turner Prize exhibition in Hull contains work from the 1980s to today, including wooden figures, pottery and newspapers that she has painted on.

The centrepiece is 1987’s A Fashionable Marriage, based on William Hogarth’s Marriage a la Mode, which features a cast of cut-out characters including a flirting Margaret Thatcher and Ronald Reagan.

There are also porcelain dinner sets, found in junk shops. Himid has painted images of black slaves on some and aristocrats – some of whom are vomiting at the news of the abolition of slavery – on others.

She has also painted over parts of newspaper pages to show how they “used black people in a very subtle way which could be said to undermine their identity”.

She is professor of contemporary art at the University of Central Lancashire and was made an MBE in 2010 for services to black women’s art.

What the judges said

The Turner Prize panel said they admired “her expansive and exuberant approach to painting which combines satire and a sense of theatre”.

They also said they “acknowledged her role as an influential curator and educator who continues to speak urgently to the moment”.

Out of the ‘wilderness’

Himid said she was “thrilled” to win, and thanked a list of long-time supporters in her acceptance speech.

She said: “To the art and cultural historians who cared enough to write essays about my work for decades – thank you, you gave me sustenance in the wilderness years.”

Speaking to BBC News afterwards, she said some of the art establishment was now catching up with her.

She said her win probably wouldn’t change people’s perspectives and attitudes, but added: “I think it will get people talking, which is the point of my work.”

The Turner Prize grows up

After a change in the rules, this was the first time since 1991 that artists over the age of 50 were eligible for the prize, which used to be infamous for rewarding outrageous Young British Artists.

As well as Himid, 52-year-old Birmingham painter Hurvin Anderson made it on to this year’s shortlist.

Tate Britain director Alex Farquharson, who chaired this year’s jury, said there was a desire to celebrate artists who had previously been neglected by the mainstream.

And there was a very international feel to the shortlist, which also included Stuttgart-born Andrea Buttner and film-maker Rosalind Nashashibi, who was born in Croydon to Palestinian-Irish parents.

Their work is on show at the Ferens art gallery in Hull until 7 January. 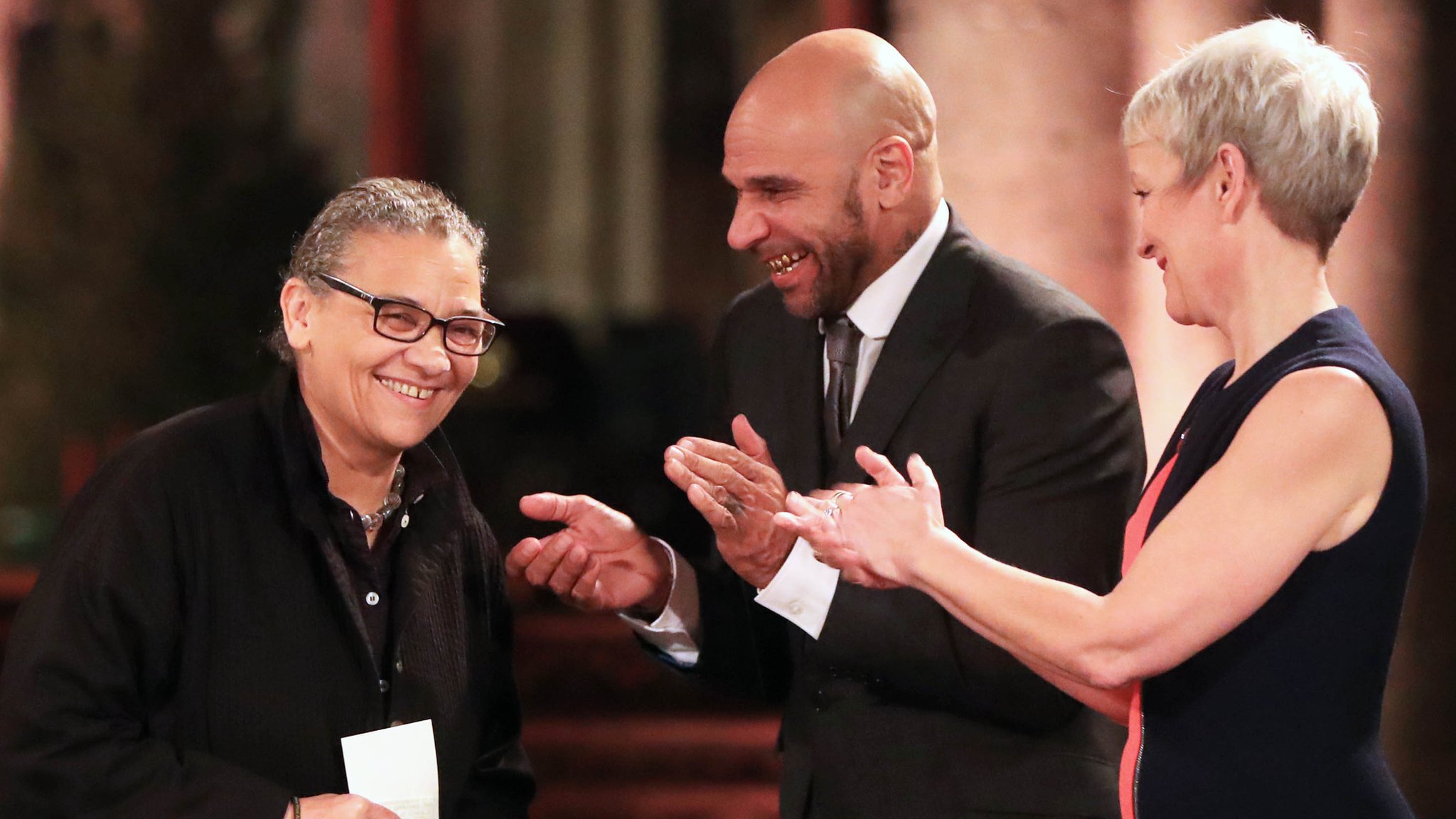