In our series of letters from African journalists, the editor-in-chief of Nigeria’s Daily Trust newspaper, Mannir Dan Ali, says instead of shouting to be heard, Nigerian soldiers have been told to learn more languages.

The new regulation came in characteristic military fashion, giving soldiers a window of one year to learn to speak Nigeria’s three main languages.

It did not specify whether those unable to do so by November 2018 would lose their jobs.

The languages in question – Hausa, Igbo and Yoruba – represent the three dominant communities in the country, but that still leaves out a large number of Nigerians from the country’s several hundred other ethnic groups.

Army spokesman Brigadier General Sani Usman Kukasheka has since clarified that soldiers need only learn the basics, but those with a certified level of proficiency will get bonuses.

“Most Nigerians keep their distance from soldiers, who are mostly heavy handed and unfriendly to those they refer to derogatorily as ‘bloody civilians'”

He explained that the idea was to help soldiers to carry out their duties more effectively and earn the trust of the communities in which they were deployed.

If the initiative succeeds, Nigerians will be in for a shock when they hear greetings – such as “sannu” in Hausa, “ekason” in Yoruba or “kedu” in Igbo – from those in military fatigues.

Most Nigerians keep their distance from soldiers, who are mostly heavy handed and unfriendly to those they refer to derogatorily as “bloody civilians”.

Nonetheless, the Nigerian military is seen as one of the most nationalistic and unifying institutions in the country – with many of its personnel in cross-cultural marriages because of their postings.

A soldier will have served in all parts of Nigeria – Africa’s most populous country – during the course of his or her career.

For those with a gift for languages, it is an opportunity to learn in the areas they are deployed or from colleagues from other regions.

English is the formal language of the military and government – and even with the new requirement, will remain the official language.

But in the years after independence in 1960, there were more northerners at junior levels of the army, meaning that Hausa, the lingua franca of the north, was often used to aid communication between the lower ranks and officers.

Pidgin English is also commonly used among soldiers from different areas especially in the famous “mammy markets” in barracks, where the soldiers go to unwind away from the drudgery of parade grounds or operation zones.

The new language policy appears to stem from the challenges the military is currently encountering as it continues to be called upon to assist the police in handling law-and-order situations.

Soldiers are deployed in more than 30 of Nigeria’s 36 states in one internal security operation or another.

The military’s crackdown on Islamist insurgents in the north-east has brought with it new challenges – mainly those of non-conventional warfare but linguistic too.

However, Kanuri – the dominant language of Boko Haram militants – is not among the languages soldiers are now required to learn.

This is despite the eight-year insurgency, in which some 20,000 people have been killed, being far from over.

The Delta militant groups, who say they are fighting for a greater share of the resources for local communities, still occasionally attack pipelines and are behind numerous kidnappings for ransom.

Critics of the new measure also say that it may be counter-productive to lay emphasis on learning more languages when the army should focus more on training, strategy and tactics to actually contain these problems.

They suggest that a few talented translators may do a better job during interrogations and intelligence-gathering – instead of every soldier with a gun.

Nigeria’s lower house of parliament – the house of representatives – has already stepped into the matter.

It has asked the army chief to stop the implementation of the new policy, saying it is discriminatory and harmful to the cohesion of the army.

The MPs said that as Nigeria is home to about 400 languages, compelling speakers of other languages to learn the three major ones would be unfair – and gave some an undue advantage.

This controversy may prompt the army to mind what innovations it implements in future as tries to grapple with the challenge of supporting the police to keep everyone safe in the country.

But as it stands, the military chief is unlikely to be saying sorry for this policy – in any language. 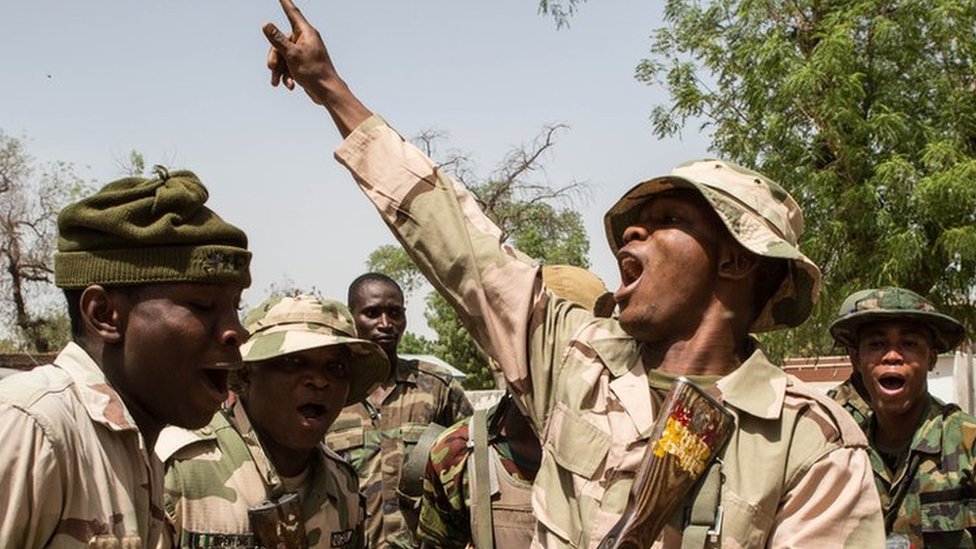