Tunisia to open against England at World Cup

England have been drawn with Belgium, Panama and Tunisia in Group G at next year’s Fifa World Cup in Russia.

Gareth Southgate’s men will begin their tournament against Tunisia on Monday, 18 June (19:00 BST) in Volgograd.

Holders Germany are in Group F with Mexico, Sweden and South Korea while five-times winners Brazil are in Group E alongside Switzerland, Costa Rica and Serbia.

The 2018 tournament takes place in 12 stadiums across Russia between 14 June and 15 July.

Reaction to the World Cup draw

A guide to the grounds hosting games in Russia

Find out more about the 32 teams who qualified

A good group for England?

England have not lost to Belgium in their past 11 meetings – and their only defeat against them in 23 games was in 1936.

The Three Lions have met Tunisia twice before, drawing a friendly in 1990 and beating the North Africans in their opening game of the 1998 World Cup in France, while England have never met Central America country Panama.

England’s possible route to the final

In summary, reaching the Luzhniki Stadium in Moscow on 15 July is not going to be easy.

If England top their group, their path to the final could see them come up against Colombia, Brazil, France and then Germany.

If Southgate’s side finish second then it could be Poland, Germany, Spain and then Brazil in the final.

If you are viewing this page on the BBC News app please click here to vote. 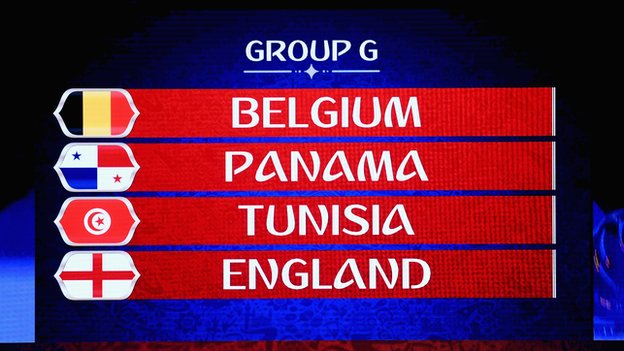