Dancers perform on the streets of Ivory Coast’s commercial capital, Abidjan, as the Europe-Africa summit opens on Thursday. ”Investing in youth” was to be the focus of the event, but it has instead been dominated by talk of the migrant crisis.

Six-year-old Habiba hugs her toy dolls made of sugar, known as Aroset El Moulid (Bride of Mawlid) on Friday in Tanta, north of Egypt’s capital, Cairo. The figurines are made each year for the Mawlid festival which marks the Prophet Muhammad’s birthday.

On Sunday, Miss South Africa, Demi-Leigh Nel-Peters, won the Miss Universe title at a ceremony in Las Vegas, US. But it was Miss Jamaica who won praise on social media for wearing her natural hair at the beauty pageant, with one Twitter user saying: “Not only did she represent Jamaica she also represented all the black women in the world, unapologetically rocking her beautiful afro”.

British-Ghanaian grime artist Stormzy was the big winner at this year’s Mobo awards. He performed live at Wednesday’s event before walking away with three gongs – for best male act, best grime act and best album.

Would-be stars perform on Saturday at the Bidi bidi refugee camp in northern Uganda. These dancers – The White Family – are among a number of South Sudanese refugees hoping to win the Bidibidis Got Talent project and the chance to be mentored by established Ugandan artists.

On Wednesday, a spectator captures the opening ceremony for the biggest solar plant in West Africa. Burkina Faso’s national power company says the 55-hectare site near the capital, Ouagadougou, will provide electricity for tens of thousands of people.

A member of Johane Masowe Vadzidzi VaJesu, a Christian group in Zimbabwe, waits for President Emmerson Mnangagwa’s inauguration to begin at the National Sport Stadium in Harare on Friday.

Beforehand, a soldier pulls a funny face during drills in preparation for President Mnangagwa’s swearing in. The one-time protégé of former President Robert Mugabe had been sacked from his post as vice-president several weeks earlier, but after a military takeover and President Mugabe’s subsequent resignation, Mr Mnangagwa was named leader of the governing Zanu-PF party and Zimbabwe’s premier.

On Friday, Moroccan children head to the Great Mosque of Sale near the capital, Rabat, to pray for rain. The king has issued a royal decree for citizens to pray for rainfall and end the dry spell troubling Morocco’s agricultural sector.

A shipwrecked migrant battles waves in the Mediterranean sea to board an NGO search and rescue boat on Wednesday.

Days earlier, African migrants are pictured in a courtyard at a detention centre on the outskirts of the Libyan capital, Tripoli. Recent footage of slave markets – where African migrants hoping to reach Europe are instead sold to Libyans for unpaid labour – has caused outrage.

A visitors to Cairo’s Egyptian Museum inspects the sarcophagus of Pharaoh Tutankhamun on Tuesday.

While a farmer holds his balance as he picks mandarins in Boufarik, Algeria’s so-called City of Oranges.

On Friday, Somali children play in the surf at Jazera beach, a popular spot on the outskirts of the capital, Mogadishu. 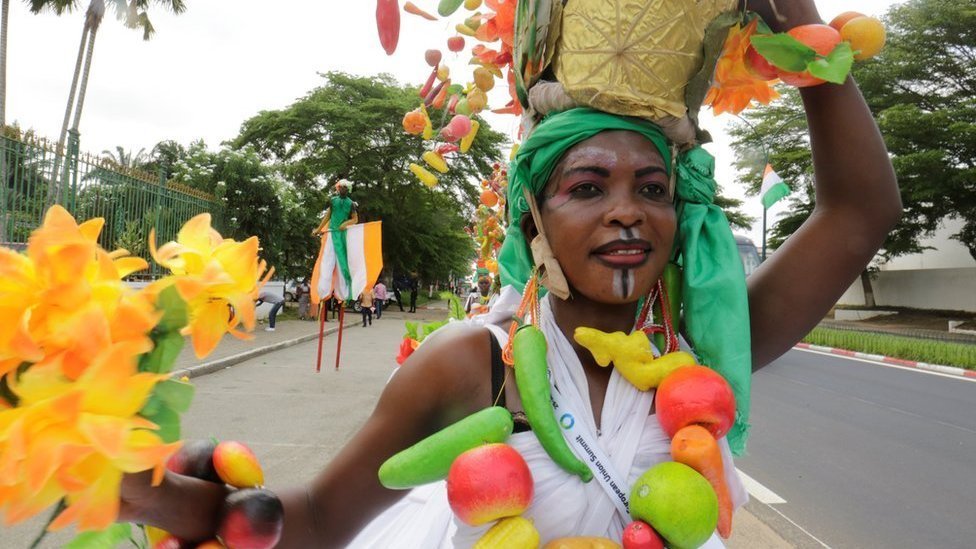